After nearly two years of dating, (which is really like 10 years in Hollywood) Riverdale costars Cole Sprouse and Lili Reinhart have officially broken up. Even though they never really confirmed the dating rumors by specifically saying “Hey, look—we are in a relationship with each other!” it was prettyyyy obvious that the pair had mad love for one another. Fans of their relationship referred to their pairing as Sprousehart, but sadly, they are no longer.

While you’re grieving their breakup (*hands you a virtual tissue*), let’s deep dive and take a look back at their relationship. It may have ended, but c’mon, Sprousehart was a beautiful pairing. We’ll miss you two!

Wishing the happiest of birthdays to my pal, Cole. 💃🏼

Cole and Lili start flirting big-time on Twitter. A peach emoji is involved, and I stop writing this timeline to watch Call Me By Your Name.

Cole posts this photo of Lili to Instagram, causing Bughead fans to fly into a tailspin over the possibility that they might be in love IRL. The fledgling shipper name known as “Sprousehart” is birthed.

Fans find a random photo of Lili and Cole at a party and decide that Lili’s hand is most definitely on Cole’s thigh. OMG WHAT DOES IT ALL MEAN.

Cole and Lili are “accidentally” hold hands during an interview with TV Line. It is, unequivocally, the cutest thing of all time:

Lili wishes Cole happy birthday, calling him “the man who has showed me more beautiful places in this past year than I have ever seen in my whole life.”

To the man who has showed me more beautiful places in this past year than I have ever seen in my whole life. Happy birthday, Cole. Thank you for all of the adventures and here’s to many more 🌙

Riverdale actor Skeet Ulrich accidentally blows up Lili and Cole’s spot and low-key confirms to ET that they’re dating. “I’m not surprised,” said Skeet, man with a fabulous name. “They have great chemistry and they’ve been at our house with a lot of the Riverdale people and they always enjoy each other’s company. So I wish them the best.”

Cole is asked about dating Lili during a Riverdale cover story for Entertainment Weekly, and he doesn’t exactly deny it. “Truthfully, it’s very pleasing that people talk about Lili and I in that way,” he said. “Because it means that we’re resonating so strongly that people really want that to be true.”

Lili and Cole appear on The Tonight Show and make every effort to completely ignore each other. They even sit on opposite sides of the couch:

But naturally a fan catches Cole embrace Lili *right* as the show cuts to commercial. We see you!

Here’s a closer look and in slow mo! 😀😍💕 Right before the commercial break, Cole went straight to Lili with what seems like an intention to wrap his arm around her. Also, you can see Lili leaned into his body as soon as he gets nearer. She knows how to tease him lmao. I just hate that they decided to fade out the camera while SH did that 🙄 Lili, you’re doing amazing sweetie! Cole, you’re whipped side is showing again 😁❤❤ So glad this late night tv show exists. Thanks Jimmy ❤❤ . . . . . . . . . . .. . . . . . . . #sprousehart #bughead #lilicole #lilireinhart #colesprouse #dylansprouse #cole #madelainepetsch #kjapa #camilamendes #riverdalecast#bettycooper #jugheadjones #jughead #veronicalodge #cherylblossom #archiecomics #riverdale #cwriverdale #netflix #beronica #varchie #jarchie #camilamendes #caseycott #madelame ctto of the unedited vid

Cole continues to spam our feed with gorgeous photos he took of Lili (by “spam” we definitely mean “bless”).

Lili opens up about filming kissing scenes with Cole, telling ET, “I feel like it’s very comfortable at this point. I mean, it’s The CW, you’re not going to get too crazy. It’s just like kissing and hugging. I think we’re all so comfortable with one another that it’s not even really a thing…. If we have a kissing scene, it’s fine. We don’t really think twice about it. When new characters have to kiss, it’s a little different and you’re like, ‘Oh, okay! What this?'”

Cole refuses to comment on speculation that he’s dating Lili, and has a pretty good reason why: “Whether you dismiss those rumors or whether you encourage those rumors, it’s giving people who are, in my opinion, a bit entitled to your personal life more power,” he told People. “And you have to have spaces for reverence in the industry. The more you let people in on that, the more people feel entitled to it and the more it becomes problematic with whoever you end up being with in the future, so I take that very seriously. So I just never talk about it because it’s not anyone’s right to know.”

Cole and Lili spend New Year’s Even in Hawaii together, and fans share some photos on social:

Cole Sprouse and Lili Reinhart with a fan today in Hawaii! pic.twitter.com/G9Dbk71zSO

Lili refuses to address rumors about her relationship, telling V Magazine, “People are just dying to know information about if I’m in a relationship or not. I understand the interest, but it’s called a private life for a reason. And it’s not something that I owe the world. People are going to say anything and everything. They’re going to say that I love KJ, they’re gonna say that I love Cami, and they’re gonna say that I love Cole: it’s inevitable. But I’m not at a point in my life where I’m ready to openly confirm, deny, or talk about a relationship that I’m in, because I think it’s brutal to have a relationship in the spotlight where I can be scrutinized by anyone and everyone.”

Cole and Lili hit up PaleyFest PaleyFest L.A., and a fan in the crowd yells “Lili, I’m coming for your man!” Her response is everything.

Lili and Cole are spotted kissing in Paris while at Rivercon, a French festival celebrating all things Riverdale! For people who live life according to the motto “pics or it didn’t happen,” this is HUGE.

After their trip to Paris, the pair were hounded by paparazzi at the airport. TMZ posted footage of Lili and Cole unamused by all the questions and pestering. When questioned about their relationship, Lili ends up responding to the paparazzo, saying “It’s an obvious answer.” TMZ took this to be confirmation from Lili that, obviously, the relationship is official.

Cole and Lili skip Coachella for a trip to Mexico, where they stay at a resort called Cuixmala, and Cole takes a million stunning photos of his definitely/maybe girlfriend.

Cole and Lili make their debut at the 2018 Met Gala, and honestly, I’m not even mad at it. Confirming their relationship in ~style~. 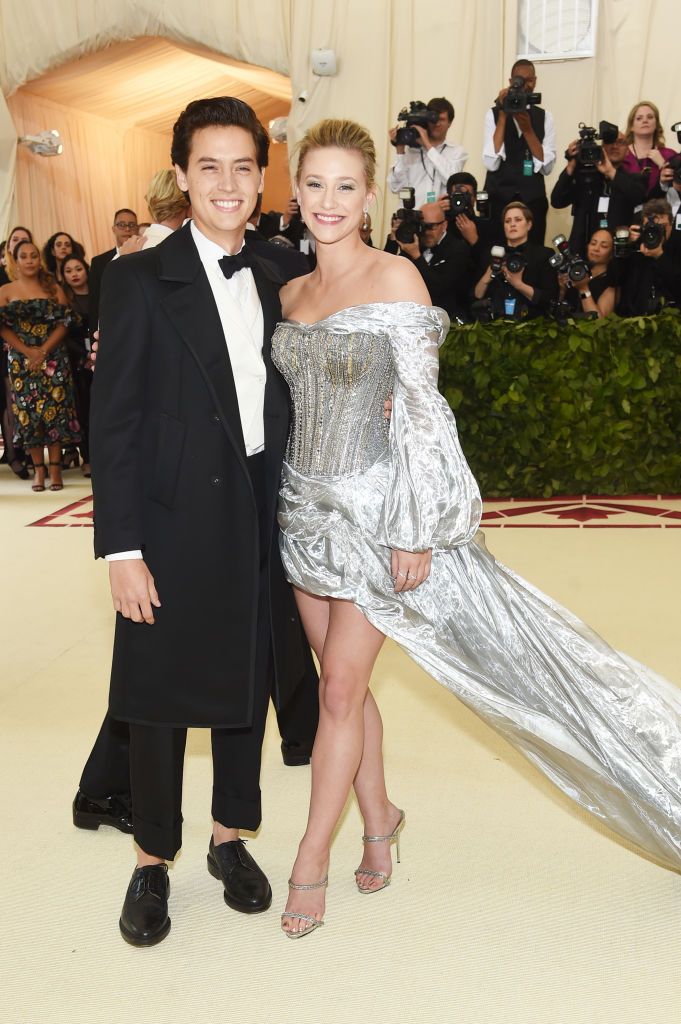 In an interview with Harper’s Bazaar, Lili has a lot to say about her relationship with Cole…mostly about how she’s uncomfortable with talking to press about what goes on between them. “I’m not okay talking about my relationship,” Lili said. “I’m not going to tell you my love story. That’s just not appropriate right now.” Well okay, then!

Lili wishes Cole a happy 26th birthday, and at this point, it’s pretty darn obvious that they’re dating. She posts a pic of him to her Instagram with a super gushy caption to go along with it. Warning: Lili’s message is SO sweet it might give you a cavity. “It seems as if the world would still be a stranger to me, if not for you,” she wrote. “I’m so thankful that our paths intertwined to form this beautiful adventure~” ending the caption with, “Happy birthday, my love.” MY! LOVE!!! If that’s not dating, then I don’t know what is.

It seems as if the world would still be a stranger to me, if not for you. I’m so thankful that our paths intertwined to form this beautiful adventure~ Happy birthday, my love.

Skeet Ulrich and Mädchen Amick (FP Jones and Alice Cooper from Riverdale) speak with Entertainment Tonight and gave sone prettyyyy juicy tidbits about Lili and Cole’s relationship on and off set.

“It’s great. I mean, they didn’t talk about [their relationship] the entire time, until just recently,” Mädchen tells Entertainment Tonight. “So, it’s nice that they’re able to now, like, be public with it, so it’s not so under wraps. Behind the scenes, they’re so sweet with each other and they’re both just exceptional people.”

Sounds like a relationship confirmation, right? Well, not exactly. While the interview seemed like an entire Sprousehart parade, Skeet ended it saying, “Their friendship is beautiful.” I’m sorry, what? Maybe he’s just trolling!?

Lili and Cole take a trip together to the City of Love (a.k.a Paris), as couples tend to do when they’re in a relationship. But you know, still no official confirmations!

Cole wishes Lili a happy birthday this time and posts a topless photo of her, but it didn’t stop there. The cherry on top? Cole calling Lili his “little muse.”

Both the birthday and the gift. My little muse, happy birthday my love.

Lili, behind the camera this time, posts a shirtless photo of Cole on the beach. Clearly in the mood to troll, Cole decides to comment on the picture, asking “Are you guys dating?” LOL.

*waits for rest of Riverdale cast to chime in* #CommentsByCelebs

Cole heads to the Reinhart’s house for Thanksgiving. Talk about taking the next step in their relationship(?)! It’s a huge family affair, and there are pics to prove it.

Cole Sprouse spending the holidays with Lili Reinhart’s family in Charlotte is what we’re grateful for. #TheMorningToast

Finally— some PDA! At the premiere for Cole’s movie, Five Feet Apart, Cole and Lili walk the red carpet together and treat fans of their relationship to some good ol’ fashioned PDA. There’s kissing, ear whispers, loving gazes— you name it! It’s all very couple-y. 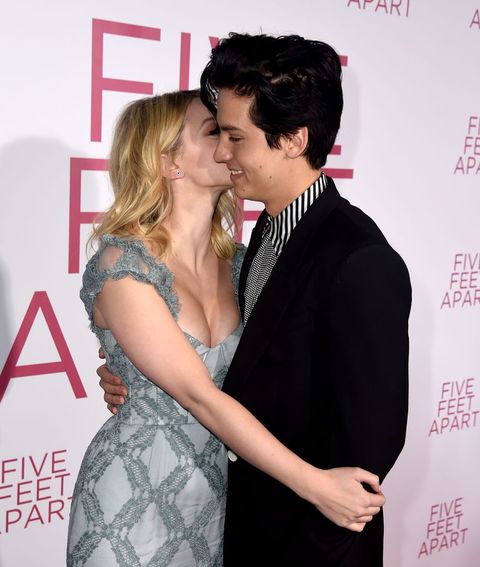 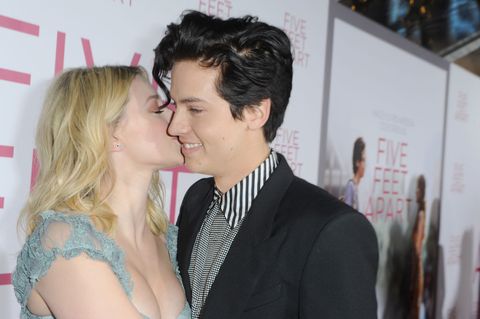 Surprise! Cole finally throws Sprousehart shippers a bone. In an interview with Glamour, Cole spills the beans on the most romantic date he’s ever taken Lili on. “I took my [Lili] on a date where we drove to this location deep into Canada, and I surprised her with a big hot-air balloon adventure, which was quite a bit of fun,” he says. “I like traveling quite a bit. I like road-tripping. Those grand experiences always end up yielding the greatest memories—and the greatest romances.” WOW, I’m trying really hard not to be jealous, but let’s be honest. This is just too f*cking romantic. 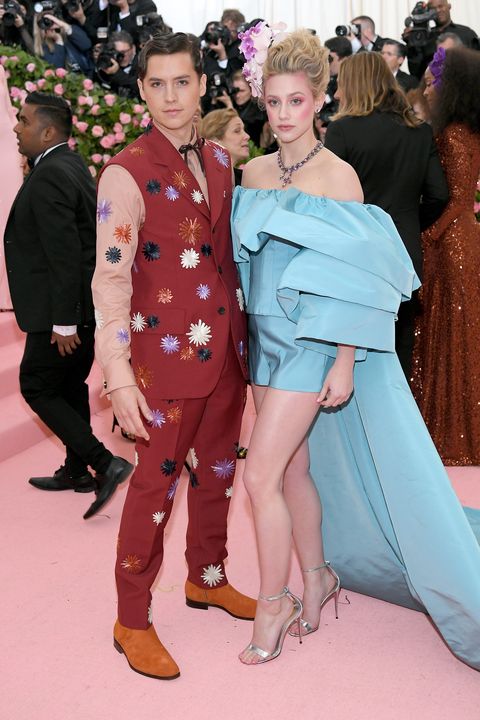 Nope, I’m not crying! I just have the dissolution of Sprousehart in my eye 😭. After nearly two years of dating, Us Weekly has reported that Cole and Lili have broken up. Though the two played nice during their Comic-Con panel the weekend before the news hit headlines, they were barely seen together at the post-event party. After the panel, Lili posts a pic to Instagram that now looks suuuuper shady:

Please don’t put me between these two ever again.

Please don’t put me between these two ever again.” Um…awkward!

An E! News source adds that Lili and Cole have likely been broken up for a while now. “Lili and Cole broke-up earlier this summer,” the source said. “The two are not living together this season.”

Though the news seems pretty sudden, there might be some hope that Sprousehart will get back together eventually. “Right now, it’s unclear where things stand, but it seems [like] they could be heading back in the direction of getting together,” the source added. Fingers crossed!