In the beginning, there were inflatable waterfowl. Then came the doughnuts, the Pegasus floats and the novelty coffins. Children have drifted out to sea and across lakes on them. They have terrorized highways, carried by the wind. And last year, on Fish Lake in Chisago County, Minn., a group of four women stranded on a rainbow unicorn were rescued by local deputies.

With each passing summer, more and more bodies of water are invaded by the species known as the polyvinyl chloride inflatable pool float.

Search #poolfloat on Instagram and there’s a near endless scroll of babies, dogs and fully grown adults reclining on inflatables of all shapes and sizes. Celebrities do it. Influencers do it. Even ferrets and tiny inanimate dolls are doing it.

The act of lounging on a novelty pool float, or, more specifically, the photographic evidence of one lounging on a novelty pool float, has become visual shorthand for a carefree, idyllic lifestyle. The phenomenon shows no signs of deflating; there has been a spike in searches for “pool float” on Google every summer for the past three years, according to Google Trends. (Popular related search topics include “unicorn,” “swans” and “pineapple.”)

And unlike luxury cars or designer clothing — or other expensive objects that appear in the social media streams of people who are glamorous for a living — floats are relatively accessible to the average person. (Depending on the brand and size, float prices can range from less than $10 to several hundred dollars.)

No beach is safe. 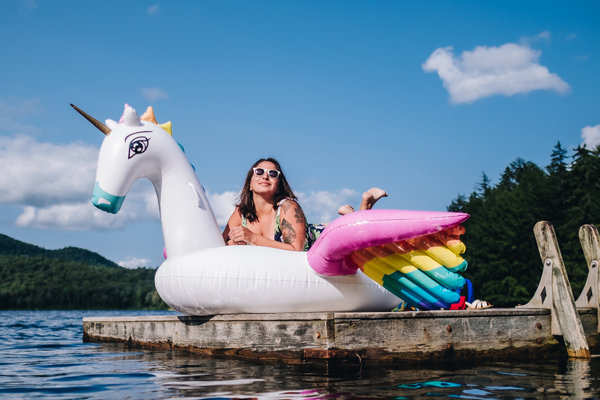 The Floatie That Launched a Thousand Ships

While other buoyant devices (see: the humble pool noodle) existed long before photogenic floaties took over, the rise of Instagram-worthy inflatables can be traced back to Taylor Swift.

The year was 2015, and Ms. Swift posted a picture of her and Calvin Harris (a D.J., and her boyfriend at the time), riding a large inflatable swan on Instagram. That same summer, a flock of floats by the same brand, Funboy, appeared at Ms. Swift’s star-studded Fourth of July party.

Blake Barrett, a founder of Funboy, called the incident “a huge social media moment” for the young company, which was founded in 2015. “Then it was off to the races,” he said.

Pool parties and mass gatherings like Coachella are the floatie’s natural habitat. In New Jersey, Floats & Boats is a popular festival at Tices Shoal that, as the name implies, celebrates both floats and boats.

In a Facebook post, the organization behind the event, now in its fourth year, encouraged attendees to bring only “really cool” floats, adding that “round tubes and noodles are not allowed unless they are doughnuts or seamonsters of sorts.” (The event, formerly known as Floatchella, underwent a name change after receiving a cease and desist letter from Coachella last year.)

The festival is the brainchild of Nicole Cesario, 26, and Marissa Laudati, 27, childhood friends who grew up on the Jersey Shore. They first got the idea to throw one after seeing how much attention their personal pizza floats drew from beachgoers in 2015.

“Everyone looks cute on a float,” Ms. Laudati said. “It’s not just, ‘Hey, I’m standing on this body of water.’ It can go along with your outfit — it just adds to your outfit appeal or aesthetic, your brand, in a way.”

Ms. Cesario said that each year brings new styles of floats with references to pop culture, like ones inspired by “Stranger Things” and by the Kardashians. “You keep seeing new ones you want to buy even if you already have one,” she said. “It’s like a lifestyle. It makes for a really cool Instagram opportunity that celebrities are able to do. Now you post and it’s like you’re one of them.”

Though Ms. Cesario and Ms. Laudati consider pineapples “basic float bait” — that is, not very original — they said fruit-themed floats and oversize inflatables continue to be big trends in the float-o-sphere. They have even spotted an inflatable bull-riding float that rocks with the waves.

“It’s like a statement,” Ms. Cesario said. “The float that you bring defines you.”

In the pool inflatables industry, it’s a competition to see which company can generate the one float design to rule them all (at least for the summer).

In 2008, the Australian lifestyle brand Sunnylife debuted an inflatable rubber duck. Barry Glick, the company’s C.E.O., said it defined the company as “leaders in the design-led float space.”

Five years later, Sunnylife unveiled a popular pink flamingo float that Mr. Glick said has been copied so many times that the flamingo, as a covetable inflatable, “is at the last end of its life span.”

While he declined to identify Sunnylife’s current best-selling float or reveal many details about the brand’s design process, citing wariness about competitors, Mr. Glick did concede that he believed the trend of animal-themed inflatables was fading. “Animals are less hot than they once were,” he said. “Animals are done.”

Mr. Barrett of Funboy, the company that saw a boom in sales from Taylor Swift’s Instagram, expressed a similar sentiment. The industry was originally fueled by sales of unicorns and swans, he said, but the brand’s newer floats, like a rainbow chaise longue, have shifted away from novelty shapes and are closer to “three-dimensional art.”

Celeste Barrett, a Funboy founder and its creative director, said the company’s designs, which include inflatable angel wings and a “retro pancake,” are inspired by flea market finds, runway fashion, museums, and art and architecture. (Ms. Barrett is the wife of Blake Barrett’s brother, who is also a company founder.)

“We’re definitely teetering into the fashion space,” she said. “I think our floats are really an extension of people’s wardrobes, as well as their homes.”

Up next, Ms. Barrett said, Funboy is expanding its focus to include “winter stuff.” This winter, you can experience that very photo-friendly pool life outside of the pool. The company introduced its first inflatable sled last year, and plans to introduce more inflatables geared for the snow in coming months. For inspiration, “we looked at vintage sweaters, different old snowmobiles,” Ms. Barrett said. “It’s very 1970s ski team.”

Sanam Yar writes about youth culture and social media for The New York Times. She is based in New York. @sanam_yar