Ariana Grande: I’ve been through a lot and don’t know what to say about any of it 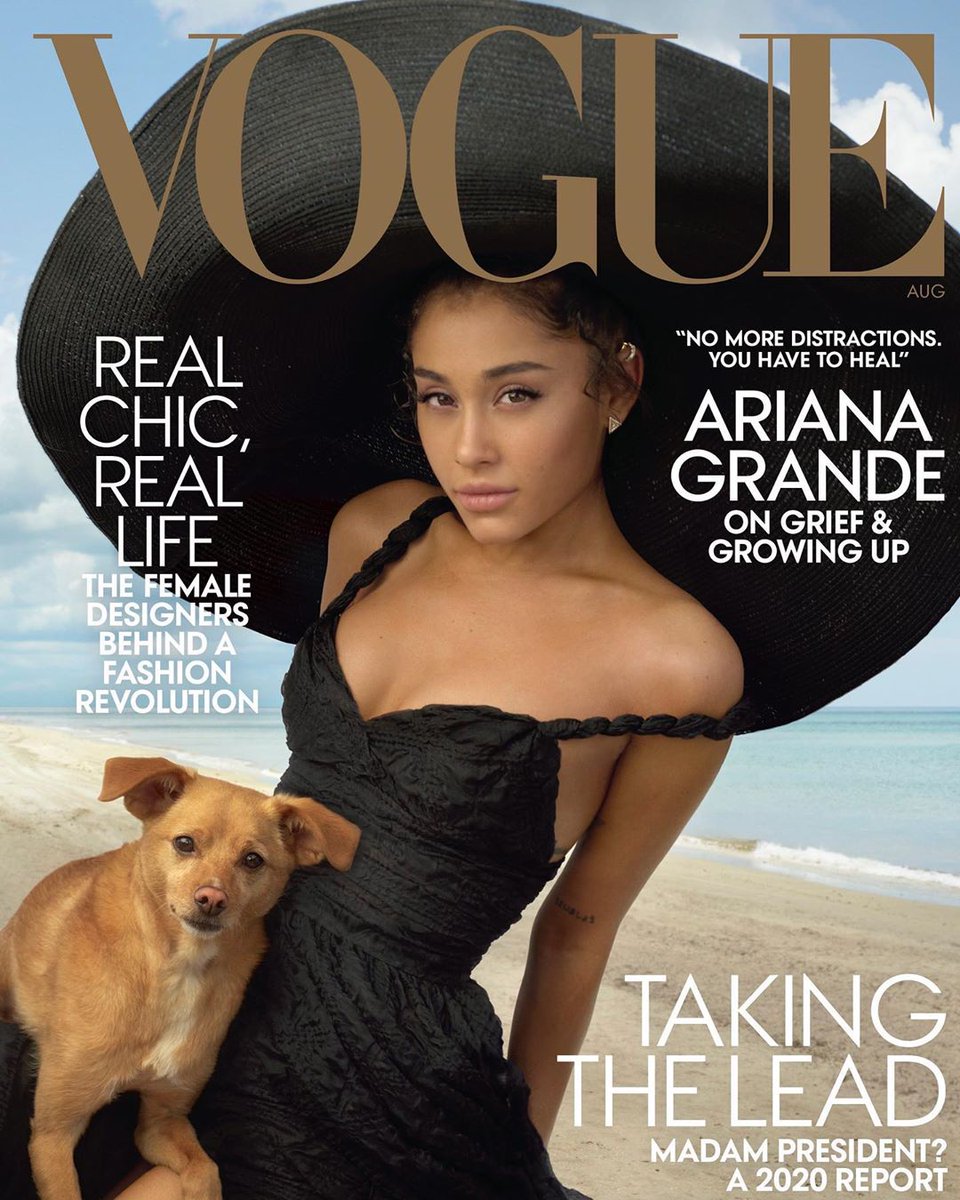 Ariana Grande is covering the August issue of American Vogue. This is not the easiest to google, but I’m pretty sure this is her first US Vogue cover and she’s only been on British Vogue before. The cover image is odd, I’ll say that. I don’t know if it’s because her makeup has changed, the image has been edited poorly and/or if we’re not used to seeing her from straight on, but her face looks different. Her dog is adorable and I learned in the piece that she has seven dogs! I was wondering how many dogs she had. The profile is quite good and worth reading. It’s peak Ariana in that she’s vulnerable, playful and open. She talks about Mac Miller’s death, about meeting Pete Davidson and falling in love with him before she knew him, about the Manchester bombing and how she still has survivors guild (although she doesn’t call it that), and about setting more boundaries. They also have quotes from her famous friends like Pharrell Williams, Miley Cyrus and Patti LaBelle. I know she’s not everyone’s favorite, but I appreciate her music and find her so interesting. She’s putting herself out there and it doesn’t seem like like a big put on.

She cries when the journalist mentions Coachella, which reminds her of Mac Miller
“I never thought I’d even go to Coachella. I was always a person who never went to festivals and never went out and had fun like that. But the first time I went was to see Malcolm perform, and it was such an incredible experience. I went the second year as well, and I associate…heavily…it was just kind of a mindf-k, processing how much has happened in such a brief period.”

She holds some things back from fans yet feels so connected to them
“I’ve been open in my art and open in my DMs and my conversations with my fans directly, and I want to be there for them, so I share things that I think they’ll find comfort in knowing that I go through as well, But also there are a lot of things that I swallow on a daily basis that I don’t want to share with them, because they’re mine. But they know that. They can literally see it in my eyes. They know when I’m disconnected, when I’m happy, when I’m tired. It’s this weird thing we have. We’re like fucking E.T. and Elliott. I’m a person who’s been through a lot and doesn’t know what to say about any of it to myself, let alone the world.”

How she coped after Mac Miller passed
“If I’m completely honest, I don’t remember those months of my life because I was (a) so drunk and (b) so sad. I don’t really remember how it started or how it finished, or how all of a sudden there were 10 songs on the board. I think that this is the first album and also the first year of my life where I’m realizing that I can no longer put off spending time with myself, just as me. I’ve been boo’d up my entire adult life. I’ve always had someone to say goodnight to. So Thank U, Next was this moment of self-realization. It was this scary moment of ‘Wow, you have to face all this stuff now. No more distractions. You have to heal all this shit.’ ”

On Manchester and how she feels hopeless
“It’s not my trauma. It’s those families’. It’s their losses, and so it’s hard to just let it all out without thinking about them reading this and reopening the memory for them. I’m proud that we were able to raise a lot of money with the intention of giving people a feeling of love or unity, but at the end of the day, it didn’t bring anyone back. Everyone was like, Wow, look at this amazing thing, and I was like, What the f-k are you guys talking about? We did the best we could, but on a totally real level we did nothing.”

On playing a character
“I like having my funny character that I play… that feels like this exaggerated version of myself. It protects me. But also I love disrupting it for the sake of my fans and making clear that I’m a person—because that’s something I enjoy fighting for. I can’t help disrupt it. I’m incredibly impulsive and passionate and emotional and just reckless. The music is very personal and very real, but yes, if you can be me for Halloween, if drag queens can dress up as me, then I’m a character. Go to your local drag bar, and you’ll see it. That’s, like, the best thing that’s ever happened to me. It’s better than winning a Grammy.”

On meeting and falling for Pete Davidson
“My friends were like, ‘Come! We’re gonna have a fun summer.’ And then I met Pete, and it was an amazing distraction. It was frivolous and fun and insane and highly unrealistic, and I loved him, and I didn’t know him. I’m like an infant when it comes to real life and this old soul, been-around-the-block-a-million-times artist. I still don’t trust myself with the life stuff.”

The piece also details Ariana’s early interest in music, how she sung as a young child and wanted to be a singer but ended up acting first. I came away with the same impression I’ve always had of her post-Manchester, that she’s trying to be authentic and to learn and grow. Oh and she said something that really spoke to the fact that she’s been breaking down during her tour. She said “It’s hard to sing songs that are about wounds that are so fresh. It’s fun, it’s pop music… but these songs to me really do represent some heavy s–t.”

Ariana also has a new video released with Vogue, for her song In My Head. This song is highly personal for Ari and I can relate to it so much. She’s describing so many women’s experiences. She puts her heart into her music and that resonates with people. Also I like the disembodied boots, this is fun too.

Here’s just a clip of that if you don’t want to watch the whole thing:

In My Head visual by @bardiazeinali for @voguemagazine