BBC Weather meteorologist Tomasz Schafernaker revealed on Twitter that one of the coolest places they could be across the UK right now is Shetland, an island archipelago in the North Sea. He pointed out that, while temperatures have exceeded 40C in some areas in the past few weeks, residents of Lerwick would not have the same problems.

“There’s always Lerwick in #Shetland for some fresher weather,” he suggested playfully, attaching a snapshot of the forecast.

Yesterday’s temperature boasted a top high of no more than 16C – and there were even strong winds and drizzle.

Shetland has been attracting the public’s attention for its spectacular views as well, especially when it appeared on the crime series of the same name.

In last night’s episode, Douglas Henshall, who plays DI Jimmy Perez, made a grisly discovery against one of the region’s beautiful backdrops – a dead body. 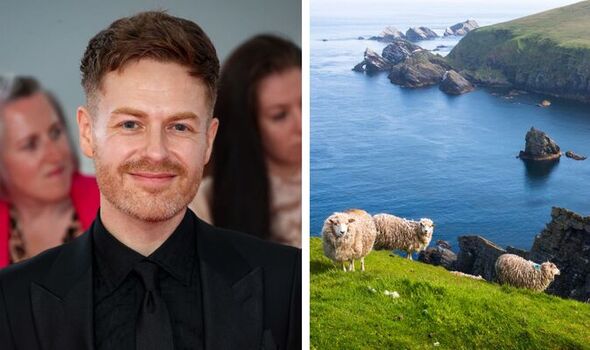 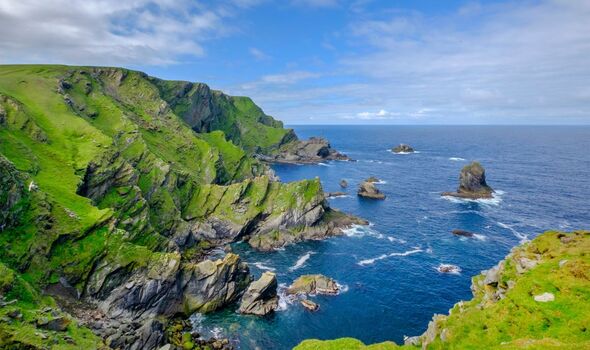 Fortunately murders are not as common in the quiet and tranquil beauty spots of Shetland as the TV show might suggest.

However, crime dramas aside, Tomasz made a very serious suggestion that Lerwick was the location to keep cool.

@LouiseCollisArt replied enthusiastically to him, joking: “Googling how to get to Shetland right now!”

Meanwhile @bickhamrm wanted to get in on the action too, chuckling: “Room for one more?!” 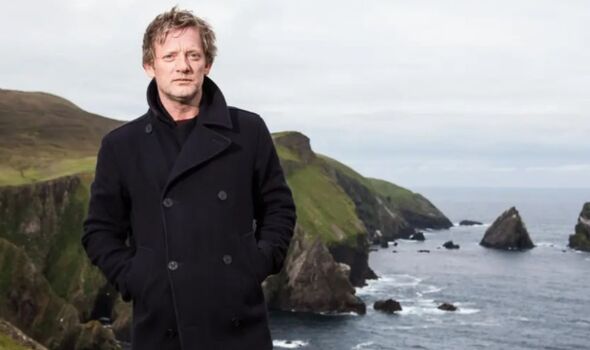 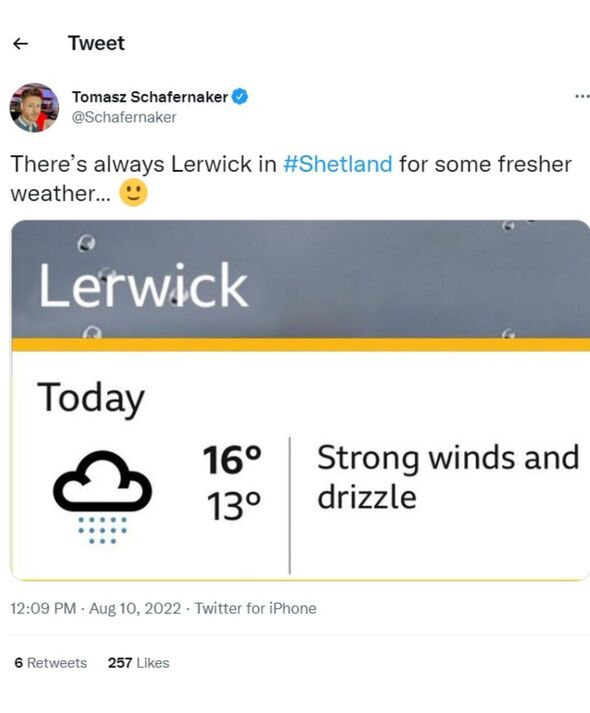 However @BenRichFans weren’t convinced they wanted to go from one extreme to the other, laughing: “Would love the drizzle but not sure about the strong winds!”

Then fellow tweeter @alsteve92 chimed in too and quipped: “You on commission from Scottish tourist board?”

As some fans jokingly prepared to arm themselves with umbrellas and stage a mass invasion of the Shetland Isles, @WinterFell1701 added: “I’d pay for some drizzle at the moment.”

Another location, albeit much further afield, where fans could go is Svalbard, off the northern coast of Norway.

Located on a polar archipelago, the city of Longyearbyen is the world’s northernmost permanent settlement – and today’s temperature is just 8C.

However, with less than 3,000 residents, the area comes with challenges – for instance, there are more polar bears than people.

This means that it is currently illegal for anyone to step outside in most areas without carrying a gun for their own protection.

For most of the month of August, the sun will not set due to the extreme polar position of the region, meaning it will still be shining at midnight – but without the intensity of heat experienced in most of the UK.

Anyone wishing to go to Svalbard is required to book an organised tour if they wish to leave the city, to prevent any potentially lethal polar bear incidents.

Otherwise, visitors must apply well in advance for a permit to roam, make the government aware of their exact plans and go armed with a gun.

Meanwhile, on Tomasz’s Twitter page, fans are still debating whether or not to make impromptu trips to Shetland.

@HJelliwell joked that the comparatively chilly high of 16C was a heatwave in itself for the region, but k84_kim hit back bluntly: “No thanks!”