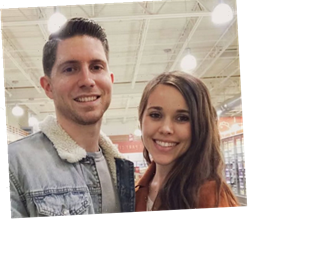 Jessa Duggar went on a date this week with her husband, Ben Seewald.

This, in and of itself of course, is not news.

The couple stopped by a local Whole Foods to grab some items for dinner — which, again, would not be something we’d feel a need to write about if that were all that took place.

But take a close look at the photo above and you’ll understand why there actually is some breaking news associated with this evenign at the grocery store.

BEN SEEWALD HAS SHAVED OFF HIS BEARD!!!!

“Let’s be real— I live off grocery pickup most of the time,” Jessa wrote as a caption to the shocking snapshot, adding in a message to her followers:

“But grocery shopping is never more enjoyable than when we do it together. #datenight @ben_seewald.”

As you can see here — and in numerous other photos of Seewald over the past several months — this father of three usually rocka beard and mustache combination.

It’s sort of become his thing over the years.

(Well, that and making lots of kids with his wife; the two are parents to sons Spurgeon, 4, Henry, 2, and daughter Ivy, who turns 1 in May.)

So while Jessa and Ben were focused on their night out together, fans were honed in on the latter’s freshly-shaven face, expressing surprise over his look and mostly praising the change.

“He looks so young with the clean shave!” wrote one commenter.

“The beard is gone!” added another.

“You are both cute as can be…I like the clean shave too,” said yet another Instagram user.

“Yay finally the beard is gone lol” a fourth person said, while someone else compared Seewald to a “teenager.”

Jessa and Ben do seem like one of the more stable pairings in Hollywood.

Despite having their hands very full with three young kids, rumors continue to swirl that another baby could be on the way soon.

How has Jessa handled such speculation? By maintaining a strong sense of humor about everything.

“Bet she [is] pregnant again now,” remarked a nosy observer on social media last month, to which Jessa replied:

Yes, and it’s triplets this time!

Which is not to say Ben and Jessa will never procreate ever again. We bet they will — at some point.

For now, instead of getting used to a new person in their family, Ben and Jessa are adjusting to a new, young-looking face. As are Duggar Nation members across the country.

What do YOU think of Seewald’s altered appearance?

The Duggars’ Net Worth Rankings: Who’s the Richest of Them All?Start Gallery

END_OF_DOCUMENT_TOKEN_TO_BE_REPLACED

END_OF_DOCUMENT_TOKEN_TO_BE_REPLACED
We and our partners use cookies on this site to improve our service, perform analytics, personalize advertising, measure advertising performance, and remember website preferences.Ok