Bill Cosbys Latest Statement To The Public Is Turning Heads

Bill Cosby has lashed out at Howard University after the institution decried actor and incoming dean Phylicia Rashad for celebrating his release. Cosby, who has not stayed silent after being released from prison, released a statement on July 4 saying Howard University “must support one’s Freedom of Speech,” per Deadline. The disgraced actor, once known as “America’s Dad,” referred to a since-deleted tweet, which saw Rashad call his sexual assault conviction “a miscarriage of justice.” Alongside a photo of Cosby, Rashad controversially wrote: “FINALLY!!!! A terrible wrong is being righted- a miscarriage of justice is corrected!” But, after users launched a Twitter tirade against her, Rashad attempted to backtrack and apologize by saying she “fully support[s] sexual assault survivors coming forward.” She continued: “My post was in no way intended to be insensitive to their truth. Personally, I know from friends and family that such abuse has lifelong residual effects,” Rashad tweeted. “My heartfelt wish is for healing.”

While some said she “cannot root for the rapist and the victim,” Rashad attempted to show more empathy … or, perhaps, retain her position by issuing her “most sincere apology” to parents and students of Howard University. In a letter, she explained the university has a “zero-tolerance policy towards interpersonal violence” and promised to be a “stronger ally” for sexual assault survivors by participating in trainings. But Howard University still publicly admonished their College of Fine Arts dean, which seemingly outraged Cosby. 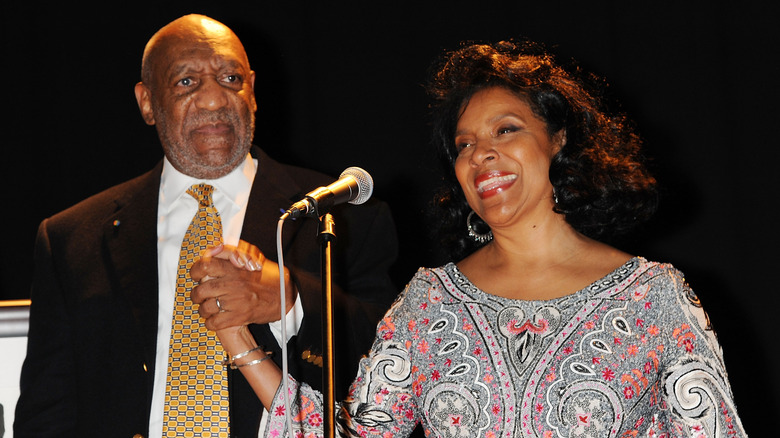 Bill Cosby slammed the very university he apparently used to donate to after it said on social media that Phylicia Rashad’s original tweet “lacked sensitivity.” Howard University also wrote: “While Dean Rashad has acknowledged in her follow-up tweet that victims must be heard and believed, her initial tweet lacked sensitivity towards survivors of sexual assault.” But in a statement obtained by Deadline, the fallen funny man defended his former “The Cosby Show” TV wife, while also suggesting Howard University does not practice what it preaches. “Howard University you must support ones Freedom of Speech (Ms. Rashad), which is taught or suppose to be taught everyday at that renowned law school, which resides on your campus.”

Despite reprimanding Rashad, the respected university, which boasts an alum list including Vice President Kamala Harris, the late Chadwick Boseman, and Toni Morrison, has received a staggering amount of criticism for the way they have handled the issue, per Fox News. Alumni and current students have not only initiated a GoFundMe to raise donations for those who have experienced sexual assault at Howard University, but they are also calling on officials to now fire Rashad. Cosby also seemingly suggested that, if the university terminates her position, they should refund the donations he made. The 83-year-old retweeted singer and actor Stephanie Mills’ post, which expressed love for Rashad and said Howard University should “give back the millions of dollars” they owe to Cosby. According to TMZ, it’s unclear how much (if any) he has donated over the years.

Bill Cosby also blamed the media for the Capitol Insurrection 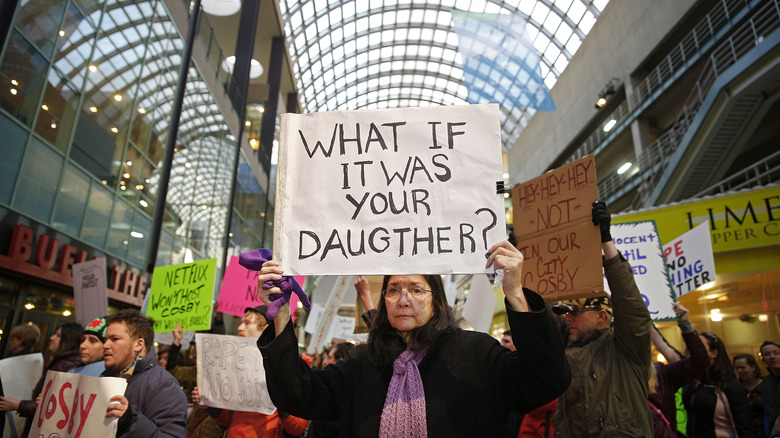 Bill Cosby also offered more personal political thoughts on July 4 of all days, as he randomly criticized the mainstream media for the attempted Capitol coup. The man, who was once legally labeled as a “sexually violent predator,” suggested he was a victim of the media, declaring, “This (sic) mainstream media are the Insurrectionists, who stormed the Capitol,” per Deadline. “Those same Media Insurrectionists are trying to demolish the Constitution of these United State of America on this Independence Day.”

He concluded his statement by referring to Phylicia Rashad again, and said: “No technicality — it’s a violation of ones rights & we the people stand in support of Ms. Phylicia Rashad.” Cosby also bizarrely tweeted similar sentiments in all capitals, writing, “DUE PROCESS IS NOT A TECHNICALITY. THE MEDIA CAN’T SILENCE THE TRUTH #BillCosbyDidntAdmit.” Cosby also linked to an Instagram video, which shows Judge Joe Brown call Cosby’s victims “groupies” who should be “accountable for their own behavior.”

Cosby served only two years of a maximum 10-year sentence at a state prison near Philadelphia for drugging and raping women — 60 have since accused him, per Deadline — but notably key accuser Andrea Constand, per Fox News. Constand called his early release “disappointing” and said “it may discourage” current and future sexual assault survivors to seek legal action.