It’s been a few days since the UK premiere of Disney’s The Lion King happened on July 14 in London, England, so by now, you must have heard all about the special guests that attended the event. Let’s see, there was Beyoncé, JAY-Z, Seth Rogen, Billy Eichner, Elton John, Guy Ritchie, Vin Diesel, and Pharrel Williams. But the biggest stars of the night were none other than the Duke and Duchess of Sussex themselves. Meghan Markle and Prince Harry made a rare appearance at the movie premiere, and as such, everybody wanted to get their turn to speak with the royals. While Billy Eichner and Seth Rogen previously revealed that there were certain protocols guests had to follow when greeting Meghan Markle and Prince Harry, Billy Eichner’s story about Beyoncé getting special treatment with the royals raises the question about whether the star got away with a few rules when it came to her plus-one — her husband JAY-Z.

While appearing on Jimmy Kimmel Live!, Billy Eichner got real about what it was like meeting Meghan Markle and Prince Harry. He said, "It was great. We were all kind of nervous, even Beyoncé."

Yup, even Queen Bey herself got nervous meeting the Duke and Duchess of Sussex. I know it’s surprising to hear this, especially since Beyoncé is well, Beyoncé, but even she gets nervous, too, and it seems that meeting royalty is one of those times. 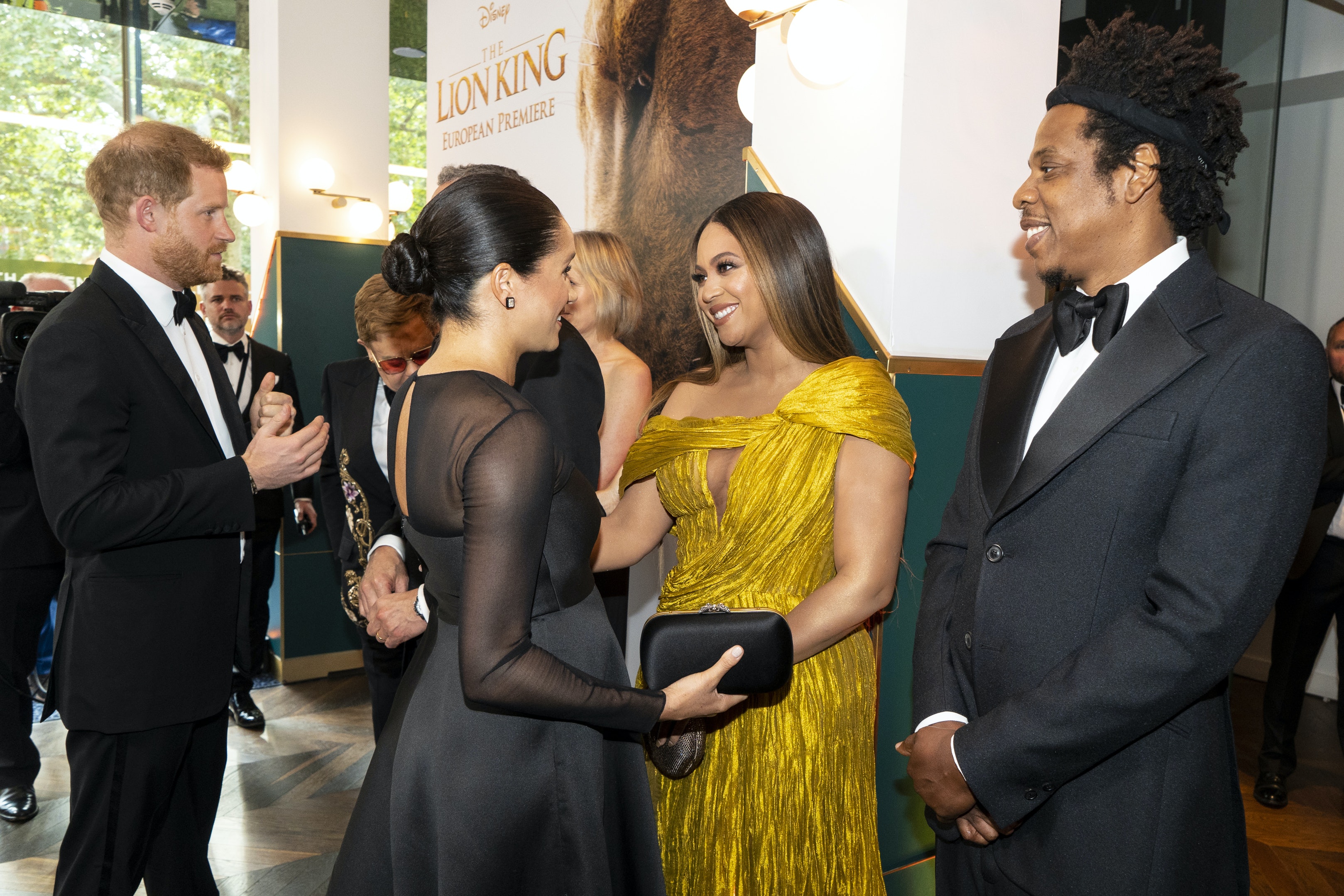 Jimmy Kimmel was so surprised to hear this about the star that he responded with, "Really? They should be bowing to her."

Billy Eichner then explained why it was so nerve-wracking meeting the royals. He said, "What makes you nervous is that the days leading up to it, they email you a protocol of how you’re supposed to greet Prince Harry and Meghan and they are very intense about it. I’m not kidding."

He continued, “You’re supposed to say, ‘Your Royal Highness,’ you can’t speak until your hands are in a handshake with his. My plus one, my guest I brought with me, my very good friend Jared, they said he had to stand behind me and not speak unless he was spoken to."

That’s when Eichner wondered if the same protocols applied to Beyoncé and JAY-Z. Technically, JAY-Z was Beyoncé’s plus one, but he’s also one of the most famous musicians in the world, and according to Eichner, maybe that gave Beyoncé and JAY-Z a free pass.

Eicher’s comments definitely made me wonder whether JAY-Z got a free pass, but the truth is that at the end of the day, JAY-Z was treated the same as everyone else. In a video uploaded by CBS News, you can see that JAY-Z remained a total gentlemen when him and Beyoncé met Prince Harry and Meghan Markle. He didn’t speak until Meghan Markle addressed him, so it looked like he followed royal protocol after all.

Take a look below:

See? There was nothing to be worried about. But what else would you expect from Beyoncé and JAY-Z (aka the closest people we have to royalty here in the States)?