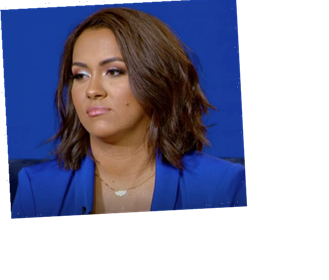 Well, it looks like yet another Teen Mom cast member has parted ways with the franchise under very hostile circumstances.

This time, it’s Briana DeJesus, and instead of getting fired like Jenelle Evans or Farrah Abraham, it looks as though Bri has decided to quit the show.

In tweets that were quickly deleted (but have thankfully been screen-shotted by the Teen Mom Tea Instagram page) Briana goes off on her MTV bosses for portraying her unfairly on Teen Mom 2.

It’s a common complaint, and virtually every star on the show has griped about unfair editing at one point or another.

But none have bitten the hand that feeds them in such an unforgettably aggressive manner:

“Lol f–k MTV lol they love to choose and pick what matters and what doesn’t matter lol I don’t get paid enough to be treated like sh-t compared to these other self-centered b-tches,”  DeJesus wrote in her first tweet.

“I’m ok with not filming!” she added.

In a follow-up tweet — which has also been deleted — Briana claims she gave MTV everything she had, only to be mistreated in return.

“I am the most easiest person to work with,” she wrote.

“I give Mtv my all and I’m very transparent with a lot of things,” DeJesus continued.

“I hate when they dangle sh-t in my face or give me ultimatums,” Bri added.

“Y’all can suck my d–k and find another mom to boss around. I got my house and that’s all I needed. Bye!”

Obviously, Briana didn’t offer many specifics with regard to why she’s so angry with the network.

But anyone who watches the show knows this hasn’t been the most flattering season for DeJesus.

A whole lot of screen time has been devoted to the storyline in which Briana catches an STD as a result of a one-night stand with Luis Hernandez, father of her youngest daughter.

Briana says she was okay with this painful chapter in her life being featured on the show, as she hoped that it would encourage young viewers to practice safe sex and get tested regularly.

It seems she now regrets that decision, as the storyline has led to brutal ridicule from both strangers and castmates.

Kailyn Lowry referred to Briana’s condition as “karma” in a tweet that coincided with the airing of recent episode.

To make matters worse, DeJesus has a new boyfriend, which means the timing for a storyline in which she catches an STD from an ex is less than ideal.

Briana has deleted not only her latest tweets, but all of her tweets.

This was probably an attempt to avoid feedback from viewers, but the people still had their say in the comments section of Teen Mom Tea’s Bri post.

Many are skeptical about the possibility of Bri following through on her threat and actually quitting the show.

“Ok Briana. See you next season,” one commenter wrote.

Others decided to go for the really low blows:

“Got my house AND those antibiotics …” another person joked.

“Nah she mad cause she got a std and blaming it on everyone else but herself,” yet another chimed in.

One even went so far as to compare Briana to the most notorious Teen Mom of all-time:

“She wanna be jenelle so bad,” they wrote.

And quite a few just pointed out the obvious:

“How does she plan to keep paying for that house with no job?” one commenter asked.

“Gotta keep up with those payments though!” another pointed out, adding, of course, some laughing emojis for good measure.

To her credit, Bri has spent more time in the working world than any of the other Teen Moms, so she’ll probably fare better than Jenelle if she really does leave the show.

But doing so will almost certainly result in a big, big pay cut.

We’ll have further updates on this developing story as more information becomes available.

END_OF_DOCUMENT_TOKEN_TO_BE_REPLACED

END_OF_DOCUMENT_TOKEN_TO_BE_REPLACED
We and our partners use cookies on this site to improve our service, perform analytics, personalize advertising, measure advertising performance, and remember website preferences.Ok