Britney Spears says mother is 'concerned' about her 'weird' behavior

Britney Spears admitted that her mother Lynne Spears is ‘concerned’ about her recent behavior in the caption of a Tuesday Instagram post.

The 39-year-old pop superstar sounded jubilant in the breathless post as she wrote that she had been reborn amid her father’s suspension from her conservatorship and her ongoing legal efforts to end it completely.

‘My mom gets so CONCERNED and says “You’re acting weird … what’s wrong with you ???” she wrote in the caption, where she later declared herself free from the ‘family business.’

Her latest post arrives just a day after she shared Halloween-themed photos of herself covered in fake blood and in handcuffs along with a murder mystery scenario. 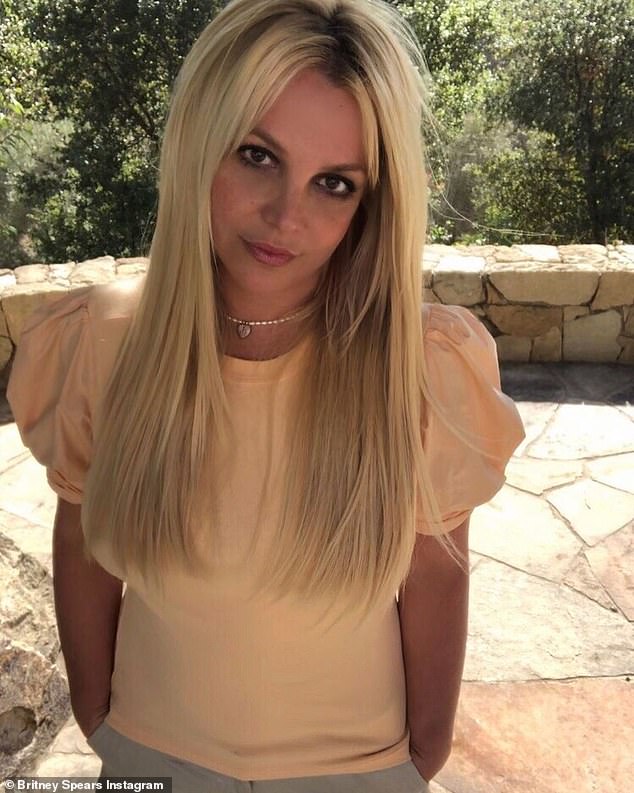 Worrying: Britney Spears, 39, shared that her mother Lynne Spears was ‘concerned’ about some of her recent ‘weird’ behavior in an Instagram post from Tuesday

Britney’s post from Tuesday featured simple white text against a black background reading, ‘The most dangerous animal in the world is a silent smiling woman.’

In her accompanying caption she seemed to delight in her mother’s worries about some of her more bizarre social media posts.

‘The moment I SMILE and I realize I haven’t in a very long time !!!!’ she began. ‘My mom gets so CONCERNED and says “You’re acting weird … what’s wrong with you ???”

The Toxic singer seemed to take her recent steps toward more independence as a chance to restart her relationship with her family on more equal footing. 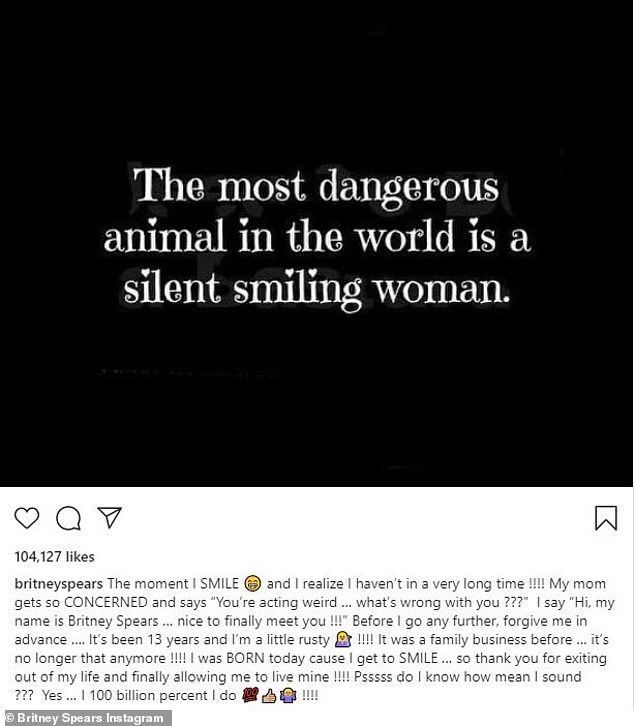 Rebirth: Britney claimed she was ‘born’ again after gaining new freedoms from her conservatorship and said she was ‘rusty’ in interactions with her mother

‘Before I go any further, forgive me in advance …. It’s been 13 years and I’m a little rusty !!!! It was a family business before … it’s no longer that anymore !!!! I was BORN today cause I get to SMILE … so thank you for exiting out of my life and finally allowing me to live mine !!!!’

The singer’s post left unclear whether it was Lynne and other family members whom she was ushering out of her life, or if she meant that the family business was now out of her life.

Britney also knew that some of her fans and critics would find her response to her mother ‘mean,’ which she acknowledged and didn’t seem to care about at all. 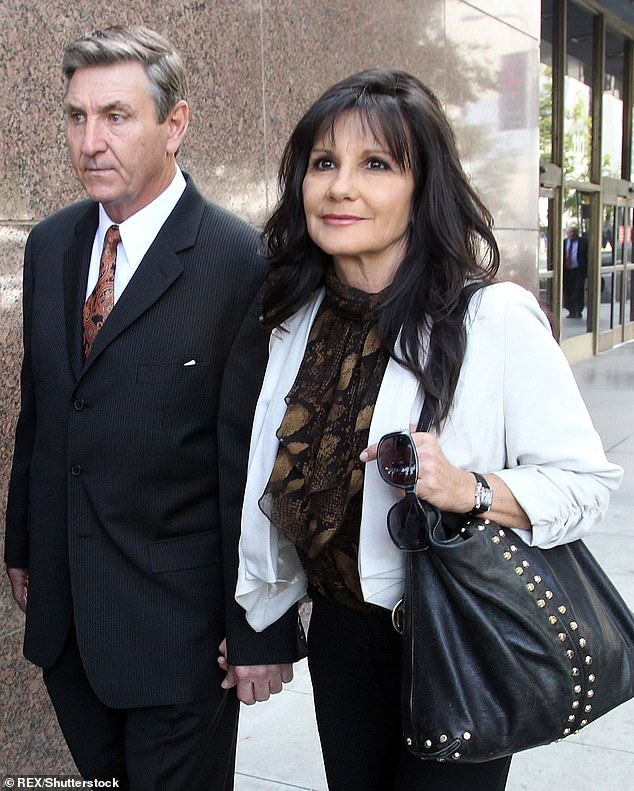 Free at last? The singer celebrated the end of her ‘family business’ and seemed to thank her mother for ‘exiting out’ of her life; Lynne and Jamie Spears seen in 2012 in LA 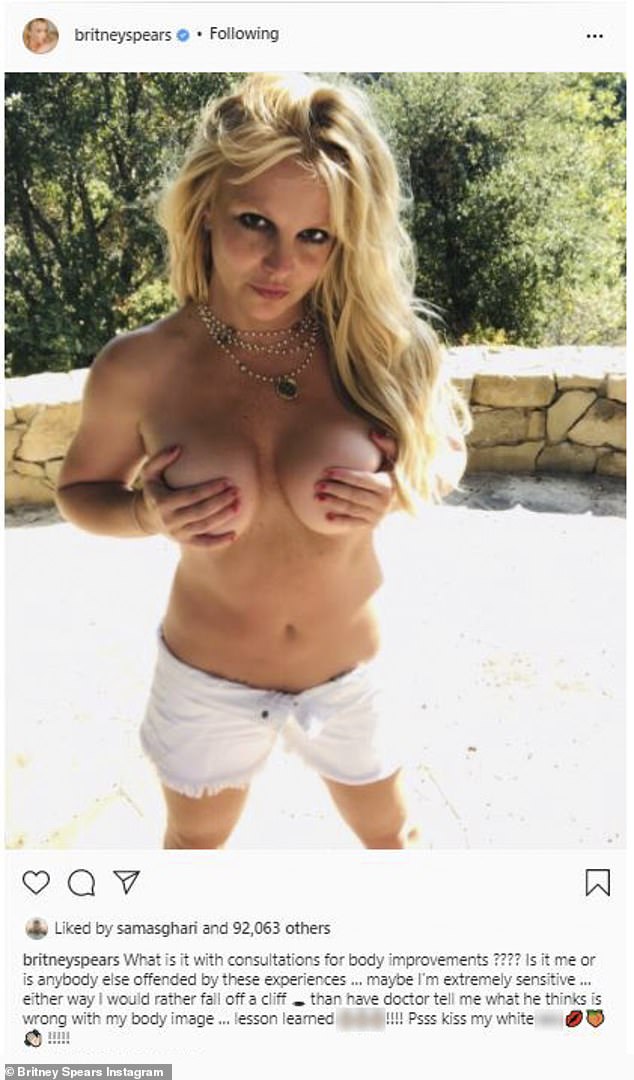 Troubling: Britney’s mother wasn’t the only person concerned with her behavior, as many of her fans have expressed worries over some of her bizarre or risqué social media posts in recent weeks 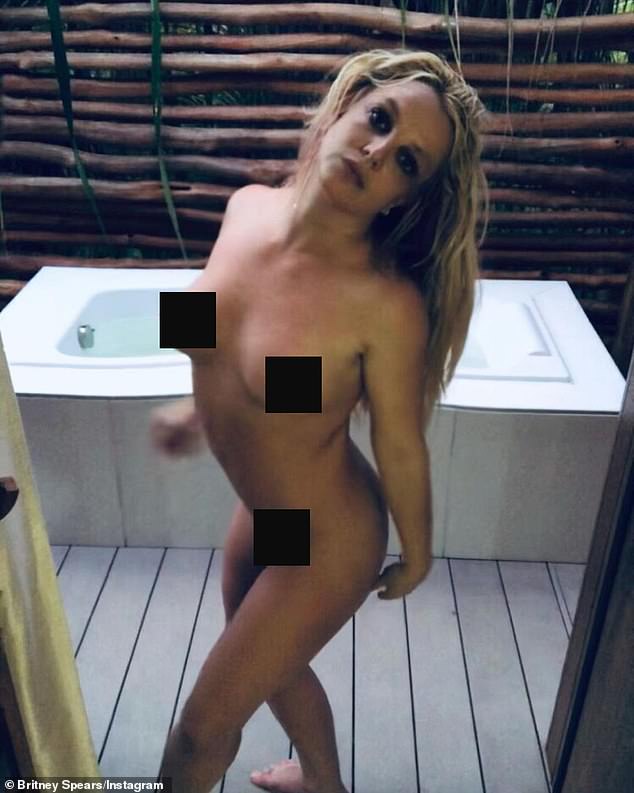 Concerned fans: ‘Is this the look of a mentally healthy person?’ one fan asked late last month after she posted fully nude photos from a vacation with her fiancé Sam Asghari

Britney’s mother wasn’t the only person concerned with her behavior, as many of her fans have expressed worries over some of her bizarre or risqué social media posts in recent weeks.

She has taken to sharing several topless photos of herself, but she took a more extreme path late last month when she posted multiple fully nude photos amid a vacation with her fiancé Sam Asghari.

While many of her fans and famous friends — including Paris Hilton — cheered on her naked pictures, others expressed deep concern.

‘Is this the look of a mentally healthy person?’ one fan asked, while another shared fears about the ‘horrible vacant look in her eyes’, adding: ‘I’m all for sexual liberation and nudity but this feels off.’

Others worried that the displays might harm her attempts to end her conservatorship. 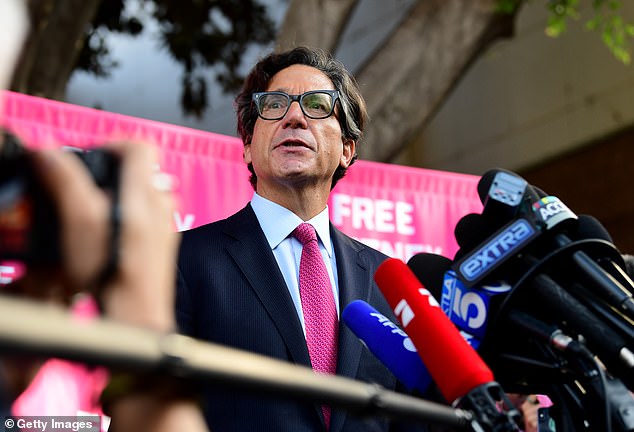 Getting the evidence: Earlier on Tuesday, TMZ reported that Britney’s lawyer Mathew Rosengart filed documents requesting any evidence of listening devices and surveillance used on her by her conservatorship; seen September 29 in LA

Earlier on Tuesday, TMZ reported that Britney’s lawyer claims her father Jamie Spears was now urging a judge to end her conservatorship in order to avoid responding to allegations that the conservatorship had listening devices planted in her bedroom.

Her lawyer, Mathew Rosengart, filed documents suggesting that Jamie’s attempts to end the arrangement are merely to protect himself.

He also requested any documents related to potential surveillance of Britney’s phone.

The allegations that her phone had been mirrored and that listening devices were placed in the singer’s bedroom were first made by an employee of the security company employed by the conservatorship in the New York Times documentary Controlling Britney Spears. 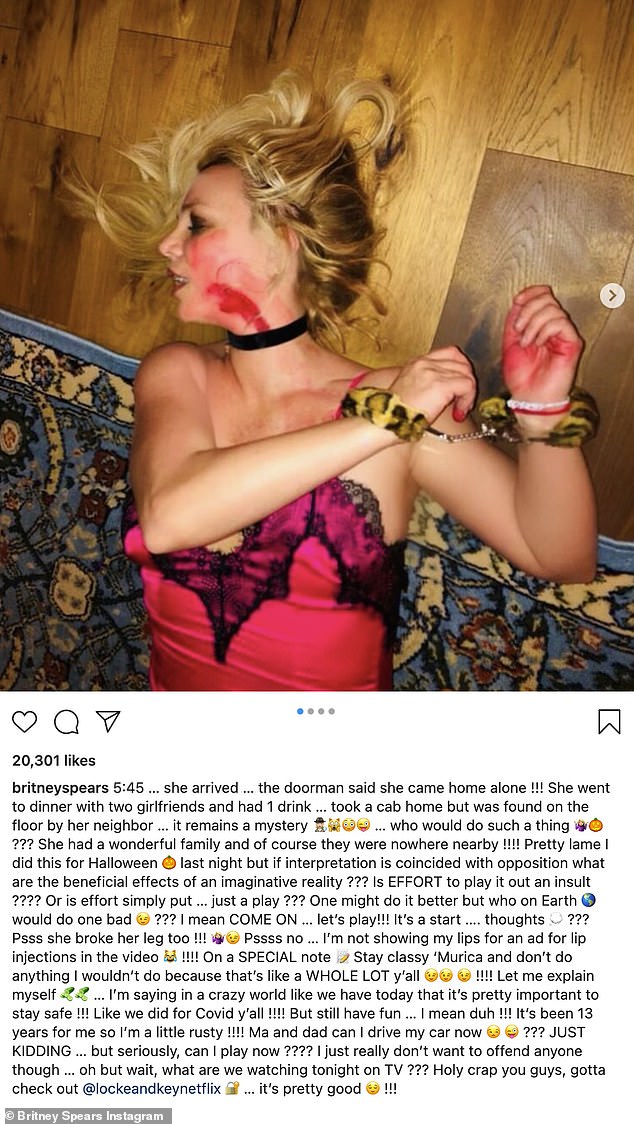 Worrisome: Earlier on Monday, Britney shared a concerning set of photos of herself lying on the floor and handcuffed as if she had been murdered 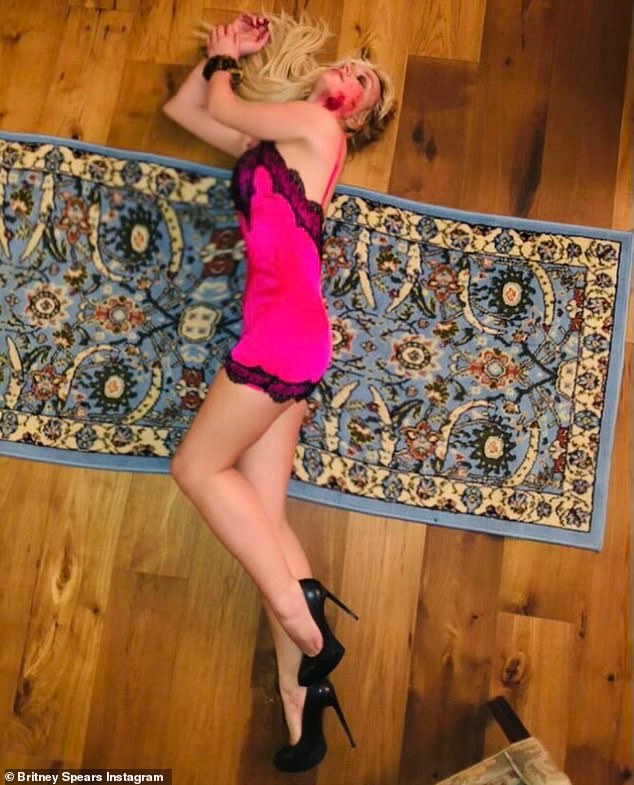 Bloody: The songstress had her face, neck and hands smeared with fake blood, and she was handcuffed, though it was a set of fuzzy leopard-print cuffs

Earlier on Monday, Britney shared a concerning set of photos of herself lying on the floor and handcuffed as if she had been murdered.

The songstress had her face, neck and hands smeared with fake blood, and she was handcuffed, though it was a set of fuzzy leopard-print cuffs.

She also wore a pink satin slip with black lace, as if her intimate evening had turned violent.

She wrote in her rambling post: ‘5:45 … she arrived … the doorman said she came home alone !!! She went to dinner with two girlfriends and had 1 drink … took a cab home but was found on the floor by her neighbor … it remains a mystery who would do such a thing ???

‘She had a wonderful family and of course they were nowhere nearby !!!! Pretty lame I did this for Halloween last night but if interpretation is coincided with opposition what are the beneficial effects of an imaginative reality ??? Is EFFORT to play it out an insult ???? Or is effort simply put … just a play ???’

Britney also appeared to reference the fact that she had gotten the keys to her car back only four months ago and was now able to drive it again. 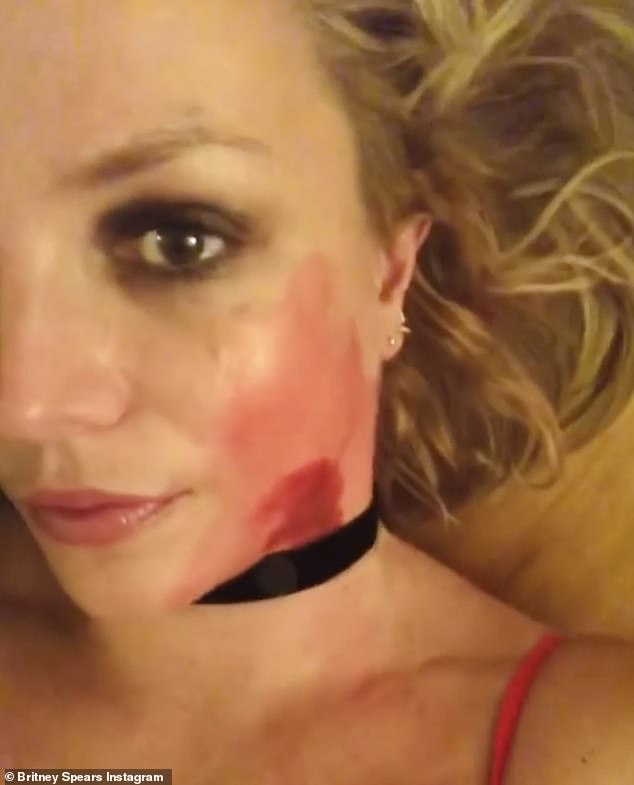 Rambling: She described the display as if it was part of a murder–mystery party and also referenced being able to drive again in the past four months after her car keys were returned to her