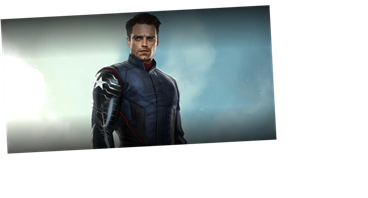 Production for the Disney+ show The Falcon and the Winter Soldier has recently begun, and it looks like Anthony Mackie and Sebastian Stan are having a great time on set. While the show won’t premiere until Fall 2020, we already know some key details about the upcoming series, as its been confirmed that the show will follow Bucky and Sam in the aftermath of Endgame. Daniel Brühl and Emily Van Camp will also reprise their roles as Zemo and Sharon Carter, respectively.

Fans have also been curious about how Bucky and Sam will look in the new series, and a previous poster for the show featured Bucky’s new costume, with his hair cut and beard trimmed.

Now, a mini-documentary posted on Disney+ called Marvel Studios: Expanding the Universe showed off more concept art for Bucky’s new look. The costume is a nod to the original Bucky costume, and his mechanical arm is emblazoned with a white star.

So are we not going to talk about this parallel/nod to the original bucky costume?!?!!!!!! pic.twitter.com/gnbtbmfDWx

As Digital Spy reports, some fans noted that the costume looks pretty close to the costume worn by a certain Captain America. “This Bucky design is just a FEW details away from being a really cool MCU BuckyCap design….,” one wrote.

Another fan had a theory about what The Falcon and the Winter Soldier will actually be about: “I’m still half-convinced this IS secretly a BuckyCap series, w/ Bucky reluctantly becoming Captain America when Sam refuses it, & Sam’s journey to become worthy of the role.”

END_OF_DOCUMENT_TOKEN_TO_BE_REPLACED

END_OF_DOCUMENT_TOKEN_TO_BE_REPLACED
We and our partners use cookies on this site to improve our service, perform analytics, personalize advertising, measure advertising performance, and remember website preferences.Ok