Candace Cameron Bure is opening up about what’s next for her after the conclusion of Fuller House.

The fifth and final season of the Netflix reboot of the beloved Full House series dropped in June, and Cameron Bure recently celebrated the anniversary of the taping of the series finale on Instagram by sharing behind-the-scenes photos. One of the photos was of what appeared to be a congratulatory note and flowers from her TV aunt, Lori Loughlin, which the 44-year-old actress confirmed to ET was indeed from her.

Loughlin is currently serving her two-month prison sentence for her involvement in the college admissions scandal at the Federal Correctional Institution in Dublin, California, which she began on Oct. 30.

“Yes, it was a note from her,” Cameron Bure tells ET’s Katie Krause. “She sent me flowers and I believe a few other people some flowers. It was so nice to feel and have her presence there at the show.”

“Yeah, it was really special,” she adds of Loughlin’s gesture. 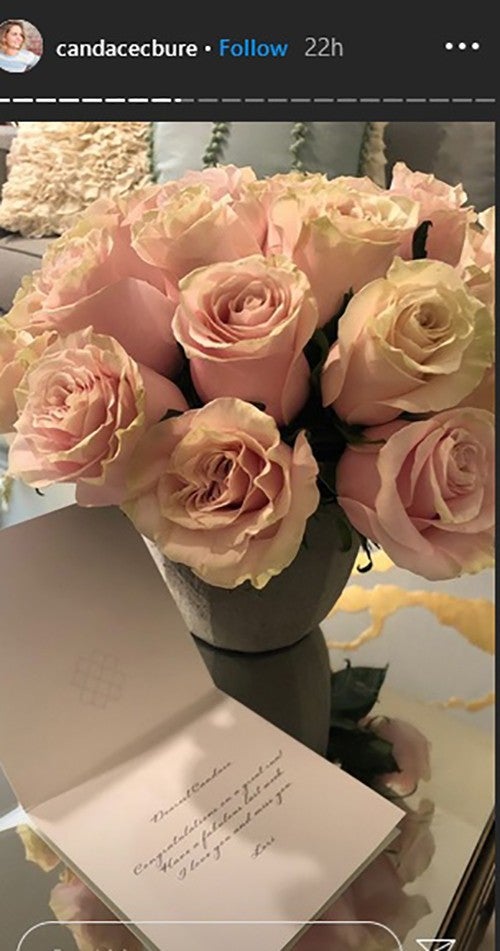 After the conclusion of Fuller House, Cameron Bure said she’s definitely open to starring in another sitcom, and even directing.

“I love the series world, but particularly sitcom,” she notes. “I absolutely love it. So, yes, yes, yes, I hope that I do another sitcom soon and we’re working on it, and it’s all about timing so not in the meantime, because I absolutely love all the Hallmark movies that I do. I mean, it really is incredible but it’s a very different schedule.”

“I ended up directing a few episodes of Fuller House, which was so incredibly fulfilling and directing a multi-cam is something I want to do more of,” she continues. “But of course with the pandemic, plans just changed, so right now that’s not as much of an opportunity just because there are very few shows that are back to work. But that’s like my wheel house. I love multi-cam and I love sitcom.”

Her latest project is Hallmark’s If I Only Had Christmas, which premieres on Sunday, Nov. 29. The feel-good holiday film, in which she plays a publicist who teams up with a cynical business owner to help a charity in need, is her ninth Hallmark movie. Cameron Bure said her Hallmark work definitely still feels challenging and exciting to her because of the level of ownership she now has over her films.

“It really does because I help develop and create these scripts with my producer,” she explains. “So, because I have done nine movies, it’s not like they just hand me one and say, ‘Here’s what you’re doing this year.’ So, I’ve executive produced the last 20 movies I’ve done for Hallmark Channel. But then the Christmas scripts particularly, I mean, I tag team with my producer, so we wrote this and developed this from the ground up. That’s why it’s so much fun and this is an homage to The Wizard of Oz which is my all-time favorite movie. There’s so many fun things. … I absolutely adore this movie. I hope everyone enjoys watching it.”

Cameron Bure later revealed how her family was going to celebrate her latest Hallmark movie release.

“It’s so funny because my family does not care about watching my Hallmark movies except for [my daughter] Natasha, she’s always up for it, but my boys [sons Maksim and Lev] are like, ‘Not another Hallmark movie,'” she shares. “But it’s my dad’s birthday. It’s his 77th birthday on Sunday, so my mom and him are going to come over — that’s it because we’re very aware of the rules and all of that’s happening, but since they’re our immediate family, they’re going to come over and we’re going to have a little birthday cake for my dad and watch the movie because the Christmas movies are my dad’s favorites.”