Carol Kirkwood, 58, told BBC Breakfast viewers temperatures are going to increase a fraction in the next few days, which pleased presenter Naga Munchetty. The host even called Carol a “tease” as she delivered the news.

Carol began the forecast: “From tomorrow you will notice the temperatures climbing a bit, not going to reach the 20s or anything, but going to reach double figures, which we haven’t seen for a while.

“It is turning milder in the next few days, but won’t be bone dry.”

Addressing today’s weather, Carol revealed it will be a breezy day and showers will head up the east coast along with heavy rain in the south west.

The former Strictly Come Dancing contestant and said temperatures will range between seven and eight degrees. 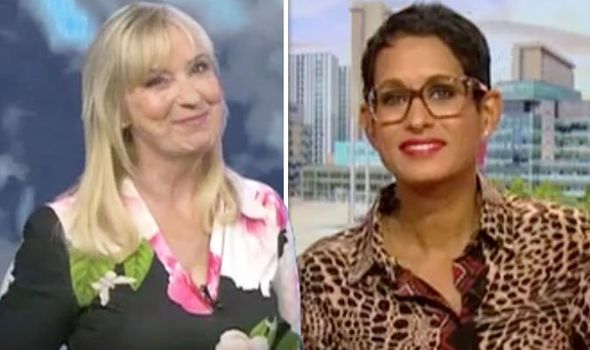 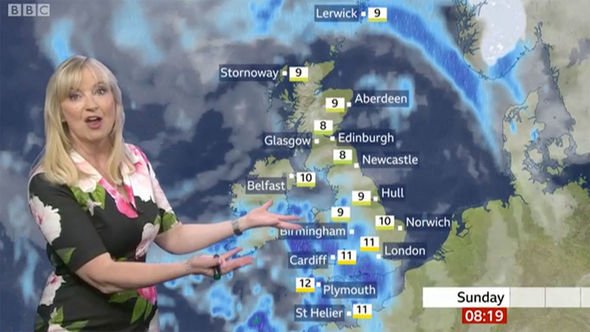 “Below average for this time in November,” she said.

Looking ahead to this weekend’s weather Carol explained about Sunday “Certainly by then a change in temperature with 10s, 11s, 12s might even hit 13 somewhere.”

Laughing away, the weather presenter replied: “I know how to keep you happy Naga!” 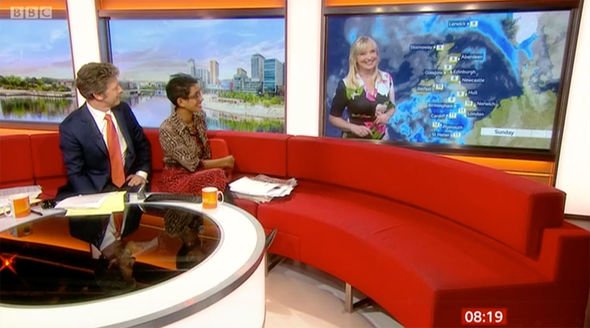 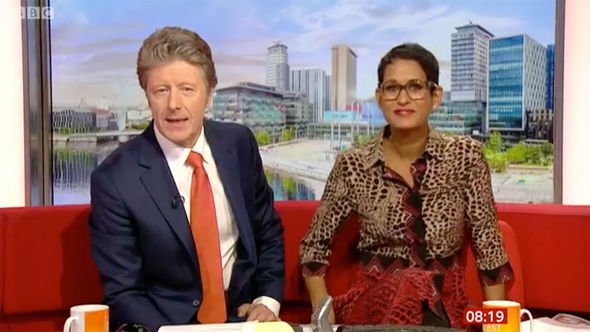 “It’s only taken a few years, we’re getting there,” Naga joked.

Earlier today, Carol apologised to her 166,400 followers for being a bit later with an update on her Twitter account.

One of her fans replied to her: “Better late than never!”

A third commented: “Morning Carol. Hope your day gets less hectic as it goes along. Keep smiling xx.”

On the show yesterday, Dan Walker apologised to Carol for introducing the weather segment later than usual, due to a hectic political-filled morning.

At the end of one of Carol’s forecasts, Dan said to the weather favourite: “Carol, huge apologies for being late with the weather today we’ve had a very busy half an hour, but it’s good!”

Carol then had to quickly run off as she revealed she had a commitment to deliver the weather on Zoe Ball’s BBC Breakfast Radio 2 show imminently.

“No worries,” Carol smiled. “But I’ve got to flag because I’m on Radio 2 in about a minute!”

The BBC star could then be seen rushing out of shot, as he hurried to make the BBC Radio 2 slot in time.

Dan laughed back in the studio and added: “She’s off!”

BBC Breakfast airs from 6am on BBC One.