Celebrity SAS: Who Dares Wins ‘thrown into chaos as six stars are forced to quit on medical grounds while filming the 2023 quasi-military training series in Thailand’

The upcoming series of Celebrity SAS: Who Dares Wins has been plunged into chaos after six stars were forced to pull out on medical grounds.

Three of the famous cast members – The Wanted singer Siva Kaneswaran, former footballer Jermaine Pennant and Paralympic cyclist Jon-Allan Butterworth – wound up in hospital in one day after they passed out while filming for the brutal reality quasi-military training show in Thailand. 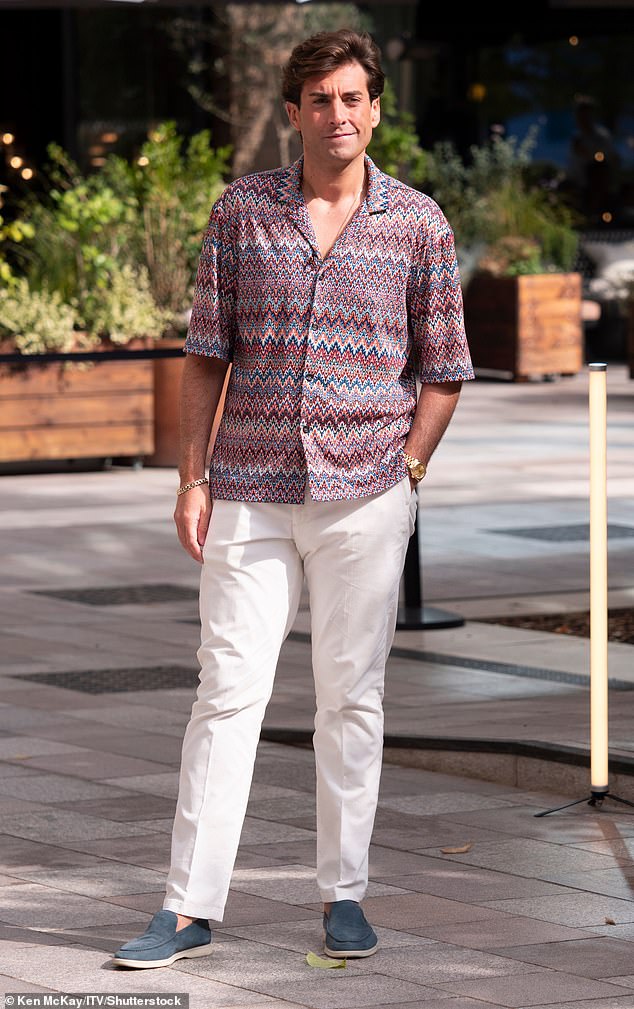 Forced to quit: The upcoming series of Celebrity SAS: Who Dares Wins has been plunged into chaos after six stars were forced to pull out on medical grounds (James Argent, pictured in July, was discharged after contracting trench foot and jungle rot)

According to The Sun, Siva, Jermaine and Jon-Allan collapsed as they walked in the tropical heat while carrying heavy bags during a marching test, with a doctor ruling they could not continue on the series.

Television personality Montana, sportsman Gareth and reality favourite James all suffered their ills at different times, with medics also discharging them from the programme.

A source told the publication: ‘They are celebrities, not soldiers. They aren’t used to the hot, harsh conditions and being pushed to their limits. 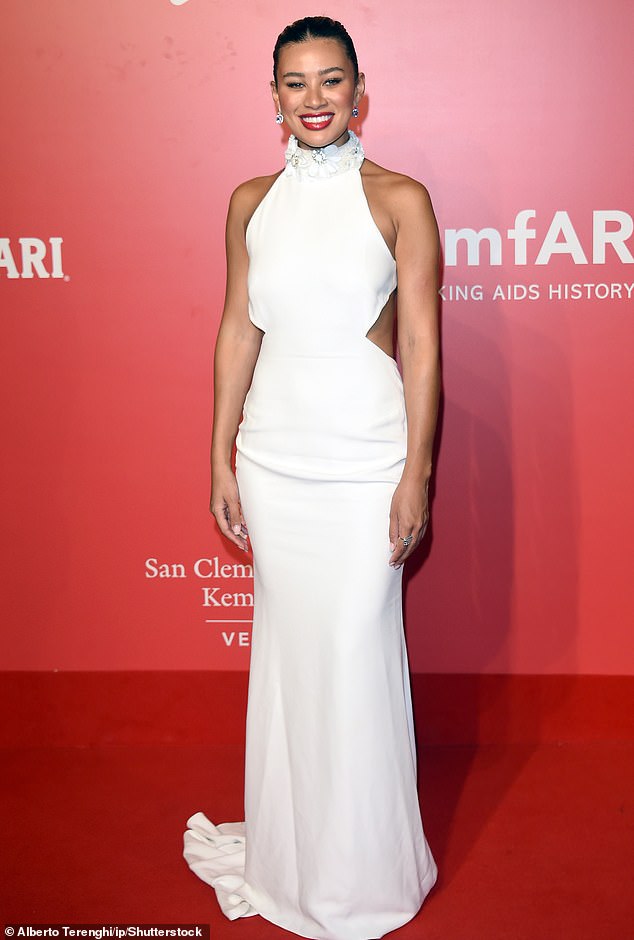 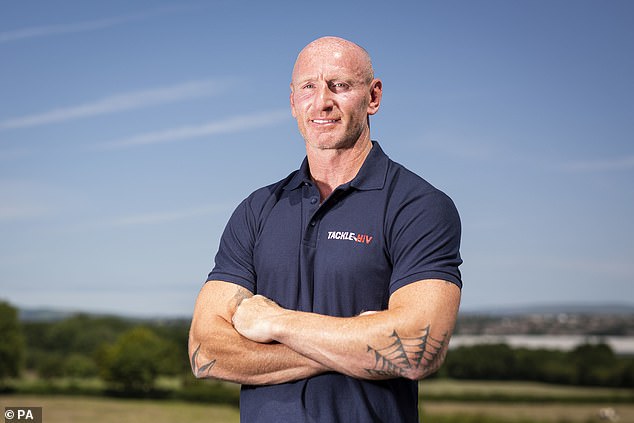 Injured: Rugby player Gareth Thomas was left in agony after pulling a hamstring (pictured in June 2020)

‘The people who fell ill and were injured were not unfit or out of shape.

‘Siva, Jermaine and Jon-Allan are all fit blokes but all individually blacked out and had heat stroke.

‘James’s issues with his feet were awful too. He was in agony as the infection took hold because of the wet boots and he could suffer for months now’

MailOnline has contacted Channel 4 and representatives for the six stars for comment. 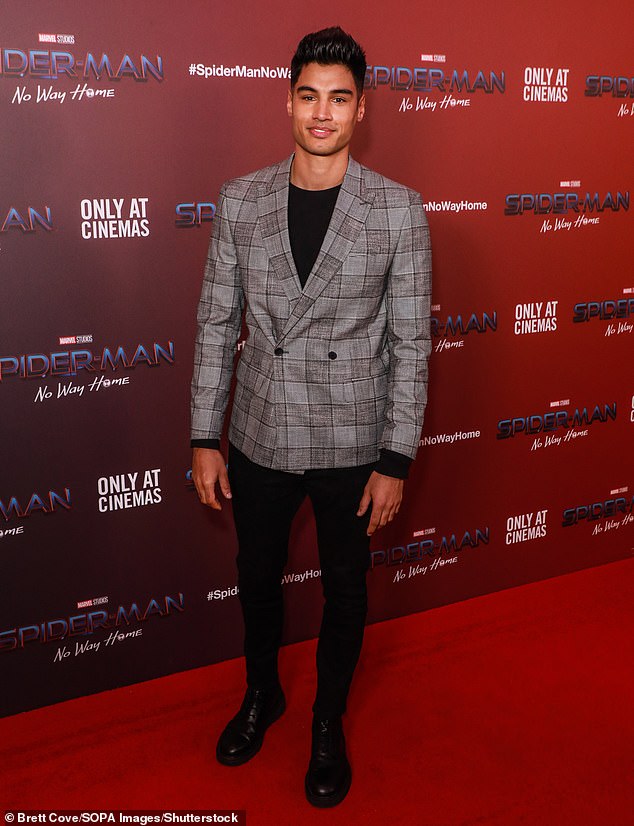 Out for the count: The Wanted singer Siva Kaneswaran was one of three stars who passed out while filming in Thailand

Dropped out: Former footballer Jermaine Pennant (right) and Paralympic cyclist Jon-Allan Butterworth (left) also passed out on the same day as Siva, with the trio ending up in hospital

Filming for the Thailand series is due to end soon with the show airing next year.

The season’s line-up was confirmed at the start of the month, with 16 celebrities signing up to take part.

Prior to his misfortune while filming, a source exclusively revealed that James was ‘determined’ to reach the end of the course and wanted to prove he was capable of tackling the most gruelling show on TV, having previously spoken about his battle with drug addiction, depression, and binge eating. 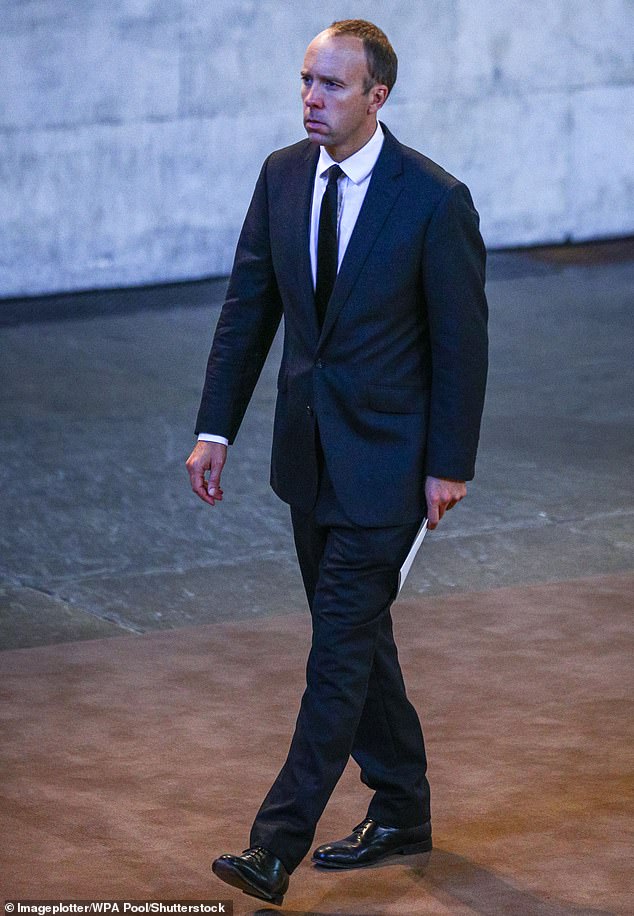 Getting involved: Matt Hancock has signed up for the 2023 series, with the politician becoming the first MP to take part

A show insider told MailOnline: ‘James has been through so much in his life but now after months of recovery and working on himself – he’s ready for a challenge of this magnitude.

‘It’s not just the physical aspect of the show for James, he’ll be tested mentally and given the chance to speak about everything he’s experienced in recent years.

‘Producers of SAS are always on the lookout for celebrities that have a story to tell and are prepared to rise to the occasion – James is the perfect signing.’ 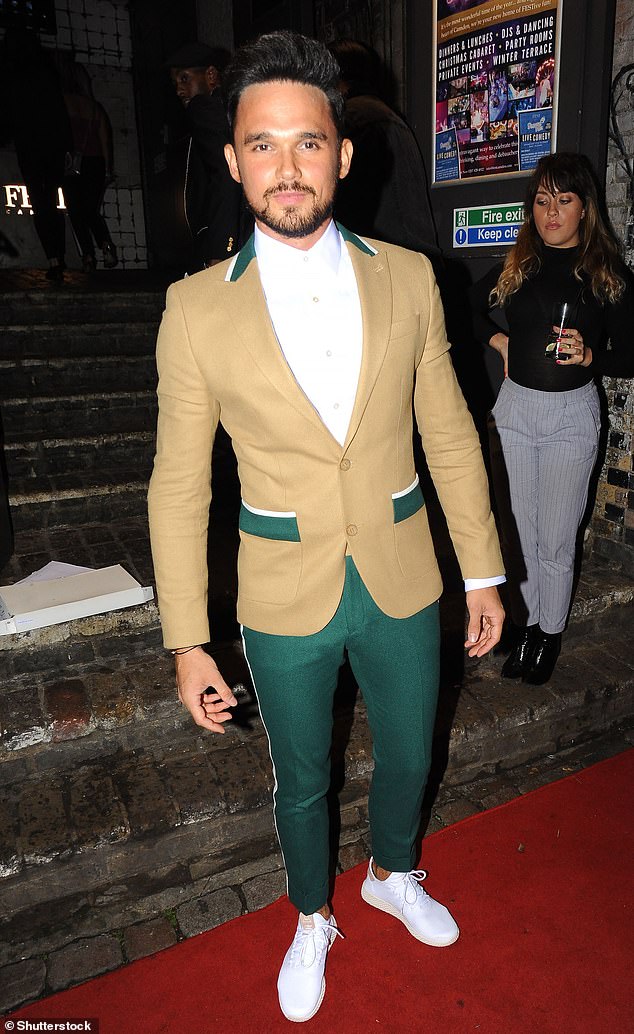 Special appearance: Gareth Gates will also be hoping to strike a chord with fearsome instructor Reyes, more than 20 years after rising to fame on Pop Idol

Other reality stars penciled in for the fifth series include ex-Love Island contestants Montana and Teddy Soares, while glamour model and former Celebrity Big Brother contestant Danielle Lloyd is also expected to pull on her fatigues.

Gareth Gates will also be hoping to strike a chord with fearsome instructor Reyes, more than 20 years after finding fame as a finalist on the Simon Cowell produced talent show Pop Idol. 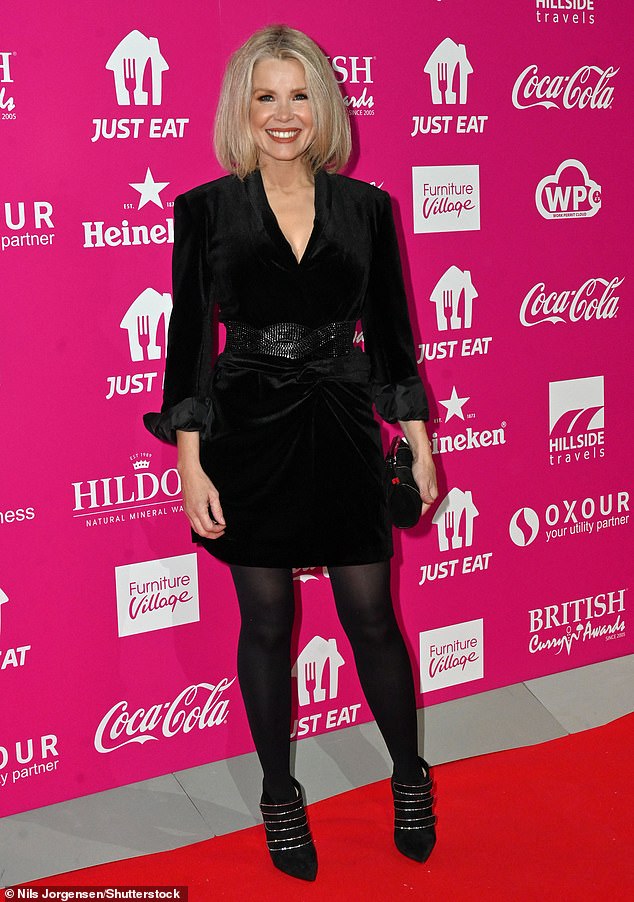 Welcome back: Elsewhere former pin-up Melinda Messenger will be returning to the limelight after a four year absence to take part in the Channel 4 show’s 2023 edition

Elsewhere former pin-up Melinda Messenger will be returning to the limelight after a four year absence to take part in the Channel 4 show’s 2023 edition.

She was joined by former Arsenal and Liverpool footballer Jermaine Pennant, whose 10-year top-flight career was overshadowed by troubles away from the pitch, notably when he became the first Premier League star to play wearing an electronic tag.

Former heath secretary Matt Hancock has signed up for the next series after meeting with producers to work out the details of his appearance, making him the first MP to take part. 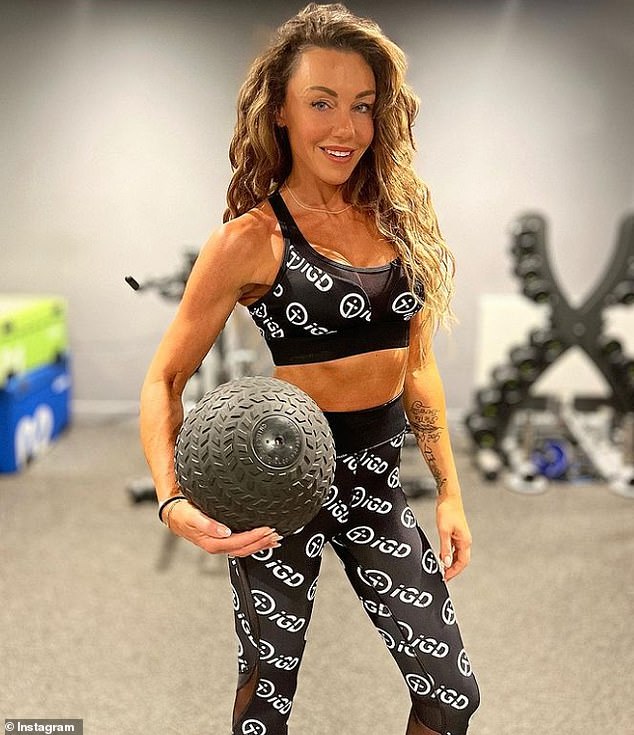 Fighting fit: Former Liberty X star Michelle Heaton has agreed to take part after getting her life back on track

Ex-Coronation Street actor Ryan Thomas, who played Jason Grimshaw in the soap until 2016, has also jumped at the chance to appear in the Channel 4 show.

It comes after 2022 series star Fatima Whitbread said she fought through ‘unbearable’ pain after breaking three ribs during a Celebrity SAS: Who Dares Wins task but chose not to talk about it as she didn’t want to be removed from the Channel 4 show.

The former athlete, 61, injured herself when she jumped out of a helicopter into the sea, a challenge which saw TOWIE star Pete Wicks, 33, leave the show after he too cracked his ribs and knocked himself unconscious.

Sportswoman Fatima, who is the oldest contestant to ever appear on the show, told the Mirror: ‘I can’t tell you the unbearable pain I was going through.

‘Even picking up my backpack was really hard. I knew I was being a pain to some of them asking them to help me on with my backpack where normally I’d just yank it up with one arm. 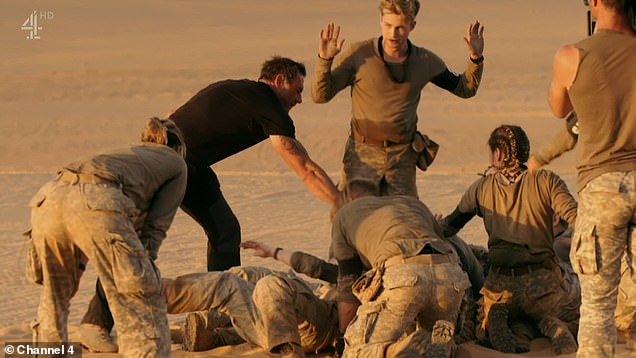 Difficult: The show sees celebrities sign up for a condensed version of the hazardous training course utilised by the United Kingdom Special Forces

‘But I couldn’t even do that thanks to three cracked ribs. As the days went by, the pain got worse. I couldn’t lay down properly or sit up properly.

‘And it was just… moving about trying to get dressed, awful. Absolutely awful.’

Fatima said quitting the show never crossed her mind as she was determined to see the process through.

She said the pain was ‘gripping’ her after the accident, leaving her unable to lie down properly at night. 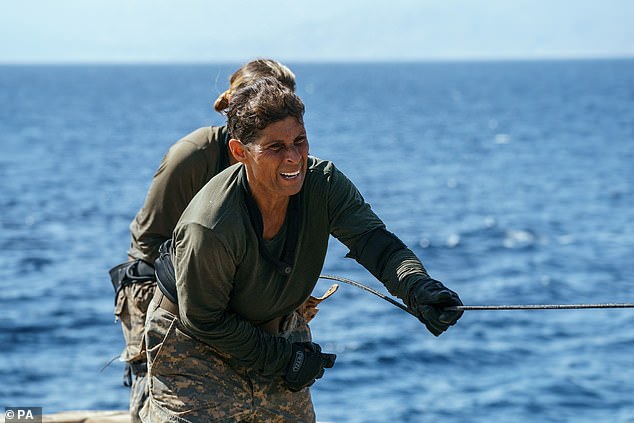 Pushing through: Fatima Whitbread, 61, fought through ‘unbearable’ pain after breaking three ribs during a Celebrity SAS: Who Dares Wins task during this year’s series

Pushed to the limits? The former athlete injured herself when she jumped out of a helicopter into the sea 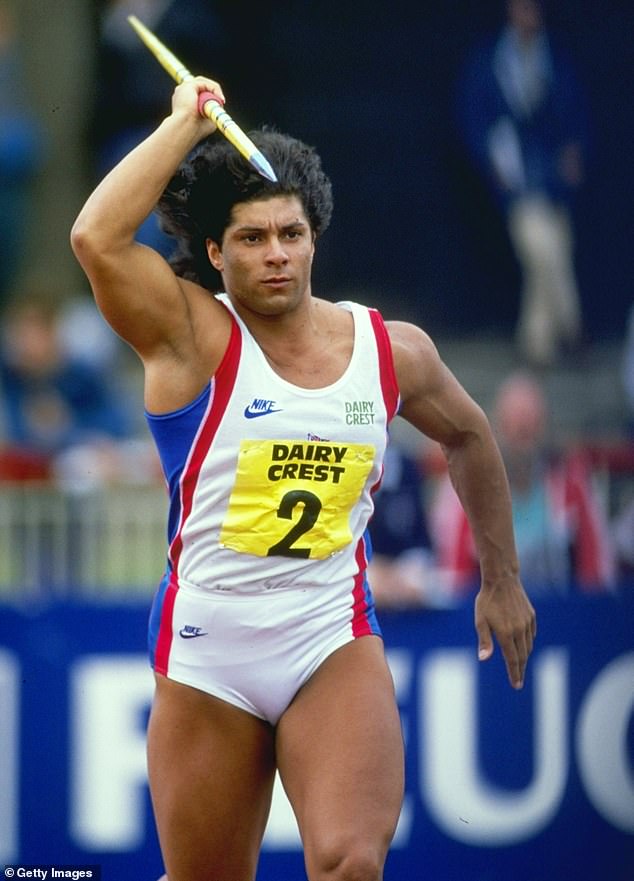 Talented: Fatima is a British retired record-breaking javelin thrower (seen at the Dairy Crest Games in Gateshead, England in 1988)

At the time she was unaware she had injured her ribs and decided not to see a doctor about the pain because she didn’t want to be told to leave the series.

Last month, Pete said he was ‘truly gutted’ to be medically withdrawn from Celebrity SAS after he knocked himself unconscious and broke his ribs during the helicopter challenge.

The Only Way Is Essex cast member was seen floating face down in the sea in the shocking scene after jumping from the aircraft with fellow reality star Ashley Cain.

Rescue swimmers raced to help Pete, flipping him over in the water as the concerned recruits were heard saying from the shoreline: ‘Someone’s struggling.’ 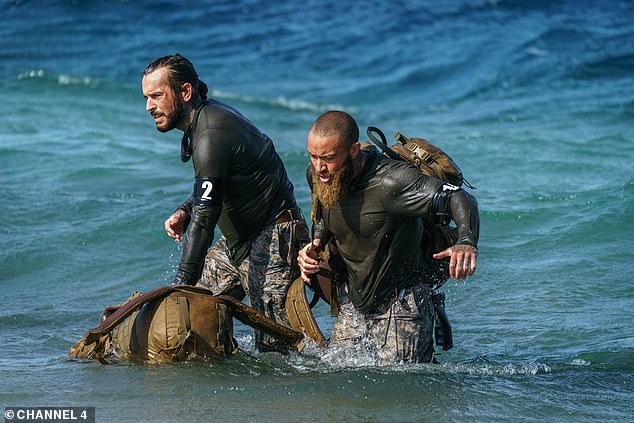 Devastated: It comes after Pete Wicks (left) was ‘truly gutted’ to be medically withdrawn from Celebrity SAS after he knocked himself unconscious and broke his ribs during the challenge

After swimming to shore, Pete told a medic: ‘I winded myself and passed out, all my ribs are quite painful and my head is banging.’

He later said: ‘I had no worries about that challenge, which is the weirdest thing. My strongest thing is probably swimming.

‘I genuinely thought this would be the challenge for me to show what I f**king got and I got it wrong, I got it very wrong. I think my leg got a little bit caught in the bag and I went straight down onto the bag, knocked myself out and broke my ribs.

‘I felt dazed and confused. I was struggling to move my upper body. Basically, I think where I’d hit the bag, and I think just the impact of being unconscious and everything else, I was very confused.

Extreme: The Only Way Is Essex star was seen floating face down in the sea in the shocking scene which aired last month, after jumping from a helicopter in a helo-cast task 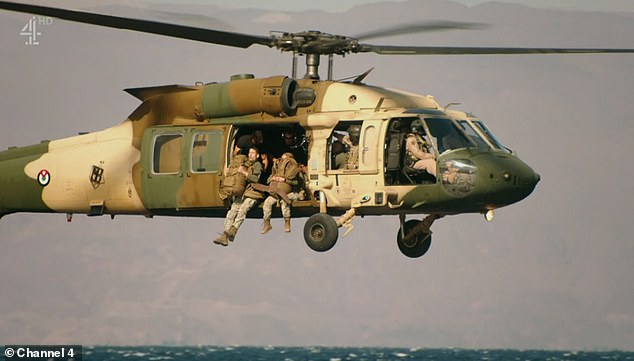 Leap of faith: Pete was seen perched at the door of the helicopter before jumping into the sea below

‘I didn’t really know exactly what was going on and even moving my arms was quite painful, just because the pressure that was on my ribs and everything, so it just wasn’t nice. It was just a strange, strange experience.’

Following his accident, the Channel 4 show’s chief medical officer medically withdrew Pete because he needed to have a chest X-ray.

New chief instructor Rudy Reyes, who took over from Ant Middleton, told the TV star: ‘The issue is you have some damage and the course is going to get much harder physically, and it’s too risky for your health.’

Wiping his eyes, Pete said: ‘I didn’t want to come out like this. I don’t f**king quit anything, that’s what it feels like.’