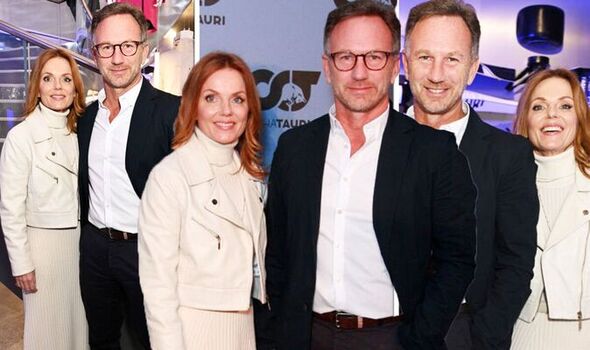 Geri Horner, 50, showed off her elegant sense of style as she attended the opening of the AlphaTauri flagship store in London on Thursday.

The Spice Girl was joined by her husband Christian Horner, 48, as the happy couple put on a cosy display as they posed for a series of pictures.

Geri opted for her usual all-white attire but slightly deviated from her usual look, wearing a pair of brown-heeled boots.

She wore an all-white ensemble, opting for a turtle-necked jumper which she wore under a matching jacket.

The Spice Up Your Life hitmaker wore a long skirt in the same colour as she stood arm-in-arm with her racing driver boss beau.

Geri Horner and Christian Horner put on a cosy display

Geri Horner and Christian Horner tied the knot in 2015

Geri Horner and Christian Horner share a son together

Geri Horner is no stranger to attending the F1 Grand Prix