CHRISTOPHER STEVENS reviews last night’s TV: You don’t have to be dim to get on this quiz show – but it helps

Katie Price: Harvey And Me

If you said ‘the yen’, congratulations — you’re as dim as a 15 watt lightbulb. If not, try again: which famous female singer was born in Houston, Texas, in 1981?

Well done if, like a complete numbskull, you answered: ‘Dolly Parton.’ You’d flop on The Chase or Fifteen To One, but you’re the right kind of contestant for Lightning. Here’s one last chance — who is the Queen’s oldest child? 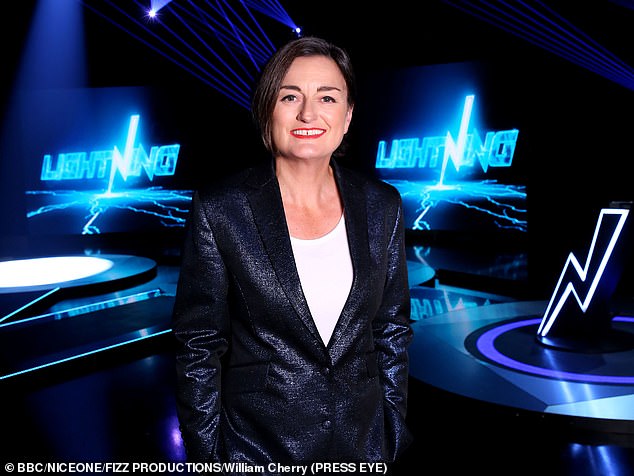 When it came to easier questions, most of the six players on Lightning just said: ‘Pass’

Unbelievably, as this teatime game show made its debut, one player said the heir to the throne was called ‘Elizabeth’.

Obviously, it’s ‘Charles’. The singer was Beyonce and in Israel they spend shekels, but it’s not so much that those questions were tricky . . . more that the answers were spectacularly, head- spinningly wrong.

When it came to easier questions, most of the six players just said: ‘Pass.’ Have a go yourself: in which country did the sweet fortified wine known as port originate?

What sort of spiny mammal has babies called hoglets?

What is a ballerina’s short skirt called? And where in a church do the bells hang? The contestants drew a blank on all those (but you knew it was Portugal, hedgehogs, a tutu and the belfry).

Perhaps the quizzers were confused by the stupidly complicated rules of this show, with six rounds against the clock. First, they had to get one question right, then two in a row, then guess an answer from three clues.

After that, they had to roll a ping-pong ball along a slope into a hole, before a head-to-head challenge and, finally, a game of general knowledge hopscotch along a path of stepping-stones that lit up.

Smelly hot tub of the night:

Bradley Walsh and son Barney shared a wooden bath filled with whey, the waste product from cheese, on Breaking Dad (ITV). It’s meant to be good for the skin. ‘You can drink that,’ the Swiss dairy farmer said. Eurrgh!

The daftest thing, though, is that there’s the kernel of a great game in Lightning. Throughout each round, every correct answer gave players the right to nominate a rival to face the next question. Whoever was in the spotlight when time ran out was disqualified.

That’s neat and simple. Everything else was a distraction.

As every parent of a child with severe special needs will know or find out, the business of finding good adult care can feel like a confusing game show — one with no logic and endless contradictions.

Katie Price: Harvey And Me (BBC1) saw the former glamour model negotiate the labyrinth of funding applications, assessments, panels and rejections. At 18, her oldest son’s needs are as great as they have ever been — but he is no longer a child, and help from schools and social services is evaporating.

I’ve written before about my admiration for how Katie has kept Harvey’s difficulties in the public eye.

This documentary did not shy away from depicting the exhausting challenges of caring for a teenager with severe autism — and, in Harvey’s unique case, other complex conditions including partial blindness and hormonal disorders. Katie said bluntly that she finds herself wishing her son might die before her, because she can’t bear to think of him lost in the world without her.

That’s a dreadful thing for any parent to feel, but I’m quite sure there will be many viewers who were grateful to her for saying out loud what they’ve bottled up themselves.

Most of all, this hour gave the lie to the idea that autism is an emotionless condition. Harvey is an affectionate and friendly boy who adores his mother.

‘Thank God for that!’ he replied fervently. People with autism feel love as intensely as anyone else.