Did Priyanka Chopra give the Royals the cold shoulder over the weekend? It certainly seems that way in a new video obtained by DailyMail.com.

The Quantico star was at Wimbledon on Saturday, seated in the Royal Box, along with several other celebs watching the women’s singles final, including Dame Maggie Smith and former champs Martina Navratilova and Billie Jean King (even Tom Cruise was spotted there with some of his Mission: Impossible 7 co-stars). But when actual royals showed up to their section, Pri did NOT give them the time of day!

In the vid, you can see everyone applauding the arrival of Prince William and Kate Middleton. However, Mrs. Nick Jonas seems to completely ignore them — and fails to applaud. Not only that, as the Duke and Duchess of Cambridge mingle with the A-listers, Priyanka pointedly adjusts her scarf to not even make eye contact with them! It turns out their seats were only two in front of her! 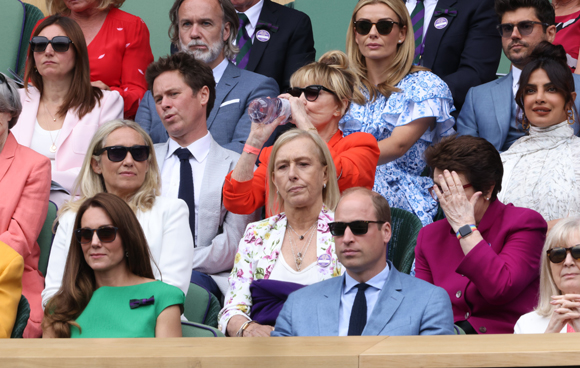 Later on, Priyanka can be seen on the Center Court balcony at the same time as the royals. It appears in photos that while others were happy to be greeted by the Cambridges, she turned away as she passed.

Was she purposely icing them out? It certainly looks that way. But why??

Well, Pri has been tight with Meghan Markle since 2016, in the days before she even began dating Prince Harry. She was one of the first to speak out against the “really unfortunate” mistreatment of her friend — and call it out as racism, telling The Sunday Times in 2019:

“Of course, it has to do with racism, it’s an obvious reason. The beauty of Meg is that she’s been herself through all of this. A lot of people got to know her after everything, but I knew her before and she’s the same chick. Now she’s got a real platform, she talks about the same things she always did.”

Two years on, Harry and Meghan — having made good their escape from the Royal family — have opened up not just about racism among the British populace but inside the Palace as well.

They even revealed there was worry about how dark their baby Archie‘s skin tone would be!

So you can see why she’d want to have her girl’s back and not give the time of day to members of that system which she believes treated Meghan so badly.

But is all this still necessary? We thought the rift was finally starting to heal! Maybe Priyanka hasn’t gotten the memo yet??

Have YOU ever shaded someone for your girlfriend’s honor??