Dua Lipa sent love to her boyfriend, Anwar Hadid, on his 22nd birthday, while giving fans an intimate look at their hot and heavy romance.

Dua Lipa, 25, is letting everyone know that Anwar Hadid makes her world a better place. On June 22, the “Physical” singer posted a slideshow of photos dedicated to Anwar for his 22nd birthday. “Happy Birthday Baby @anwarspc another lap around the sun,” she began her tribute post, which featured some of their most intimate photos. “You make my world so much better!! I’m lucky to love you and be loved by you. DEXTER IS SO LUCKY TOO N LOVES U SO MUCH!!! can’t wait to celebrate youuuu today,” she wrote.

From holding each other in a passionate embrace to laying in bed with their rescue pup Dexter between them to Dua playfully pinching Anwar’s cheeks — there is no denying just how much these two love each other.

The “New Rules” singer and her model beau made their official debut as a couple at New York Fashion Week, while heading to Marc Jacobs Spring Summer 2020 show to see his sisters Bella and Gigi Hadid walking on the runway. The stylish couple, who matched in pops of yellow, heart-shaped jewelry and tops depicting fluffy cartoon animals, had front row seats that put them in clear view of everyone.

The hot couple, who just celebrated their second anniversary on June 14, had spent this past year self-isolating at an Airbnb together and enjoying every minute of each other’s company. Dua told ELLE magazine in April 2020 that they spent plenty of time binge-watching TV shows on Netflix. They are just like us! 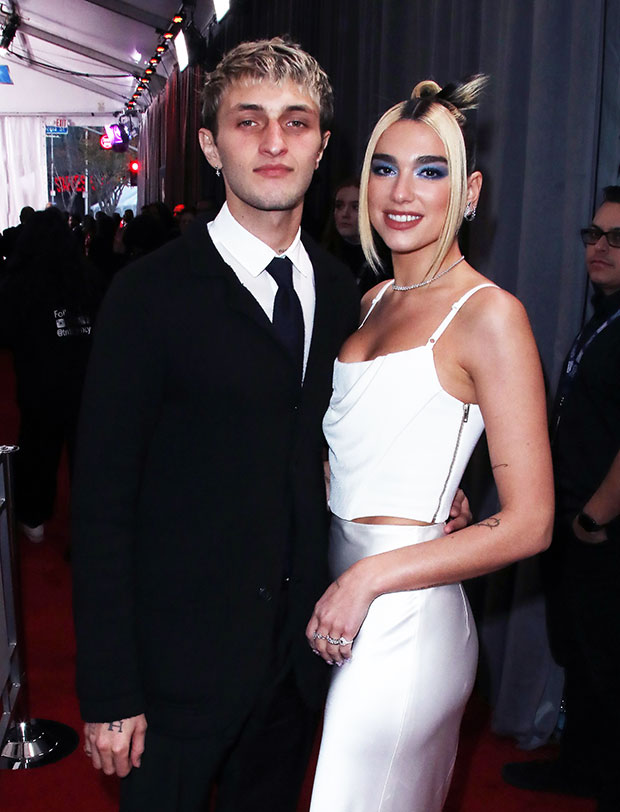 “Oh my God, I’ve watched so many shows — Ozark, Tiger King, The Night Of, The Outsider, Servant, did I say Ozark?” Dua said in her interview, which was done virtually via Zoom. “And lots of movies, too.” Another activity the couple decided to take advantage of during the lockdown was experimental cooking. “[Anwar and I] were just buying our normal fish and stuff, and octopus came up. So we said, ‘Okay, let’s try something different.’ It’s about making things fun, coming up with different recipes, trying out things that we’ve never done before,” she told the magazine.