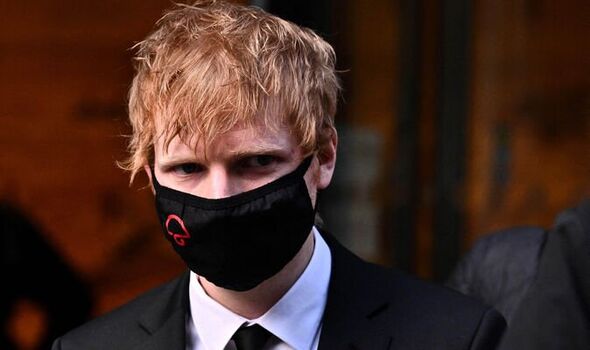 The musician hummed and sang as he defended allegations that he was had lifted the hook of a song penned by grime artist Sami Chokri and music producer Ross O’Donoghue. Chokri and O’Donoghue say the “Oh I” segment of “Shape Of You” is “strikingly similar” to the “Oh Why” hook in their song and that it was “extremely likely” Sheeran had previously heard their track.

On his second day of questioning by Chokri and O’Donoghue’s lawyer Andrew Sutcliffe, Sheeran repeatedly sang the “Oh I” hook. He also sang lines from songs including Nina Simone’s “Feeling Good” in the same key to show how melodies can sound similar.

Asked several times about the similarities between the “Oh Why” and “Oh I” hooks, Sheeran, 31, told the High Court in London: “They’re both pentatonic scales and they both use vowels.”

Mr Sutcliffe, who has branded Sheeran “a magpie”, questioned him extensively over his writing of the song in October 2016 with co-authors Steven McCutcheon and John McDaid, and the changes made as it was developed.

The court was played recordings of Sheeran singing the hook in different pitches, called stacking.

“It sounds like you were singing ‘Oh Why’,” Sutcliffe told Sheeran, who replied: “I was singing ‘Oh I’.”

The court was also played a voice note recorded by Shape Of You co-writer Johnny McDaid, in which Sheeran could be heard saying a version they were trying out was “a bit close to the bone”.

When questioned, Sheeran said there was a similarity to the 1996 hit No Diggity by Blackstreet, that it sounded too similar to the “hey yo, hey yo” section of that song.

An extract was later read to the star, in which he is quoted as saying changes made to Shape Of You regarding TLC and their 1999 song No Scrubs have “just saved us $4 million”.

The multi-millionaire musician called it “hearsay” written down, and insisted that he never said that.

Sheeran and his co-authors launched legal proceedings in May 2018, asking the High Court to declare they had not infringed Mr Chokri and Mr O’Donoghue’s copyright.

In July 2018, Mr Chokri and Mr O’Donoghue issued their own claim for “copyright infringement, damages and an account of profits in relation to the alleged infringement”.