Was it a set-up… or just luck actually? ‘Random’ fan invited on to Coachella stage to rap with Dave turns out to be film director Richard Curtis’s teenage son Spike

Richard Curtis’s teenage son Spike has sent fans wild after he was ‘randomly’ selected to join rapper Dave on stage at Coachella and sang every single lyric perfectly, but others remained convinced it was a set-up.

The son of the Love Actually screenwriter was ‘spontaneously’ plucked from the crowd and pulled on stage to sing Thiago Silva with the British rapper, 23, at the Californian festival on Sunday night.

Dave had announced to the Coachella crowds that he wanted to ‘share the stage’ with a fan and went on to slowly sing the track’s lyrics to see which fans knew all the words. 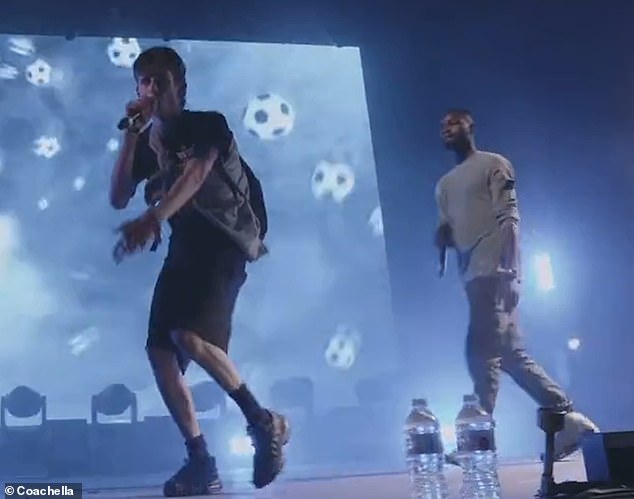 Incredible: Richard Curtis’s son Spike has sent fans wild after he was randomly selected to join rapper Dave on stage at Coachella, but others remain convinced it was a set-up

The British rapper then honed in on one fan, Spike, and got him up on the stage, with Spike immediately hugging Dave as he appeared to be completely star-struck.

Introducing himself, Spike shouted: ‘My name is Spike, I’m from London, I’m here for Coachella!’

Spike flawlessly duetted Thiago Silva with Dave, with fans cheering him on as he perfected every single song on the track, proving his incredible talents to the surprised crowd.

As the song ended, an impressed Dave said: ‘I wanna say bro that man did the craziest performance of any song I’ve ever done! Can we make some noise for this incredible man – Spike!’ 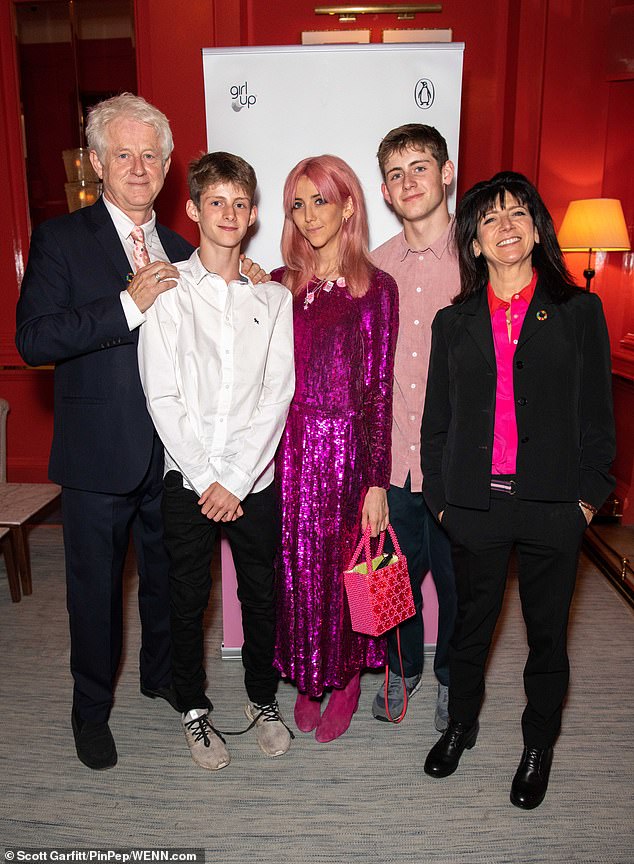 Fame: The son of the Love Actually screenwriter (Richard pictured with Spike, his partner Emma Freud and kids Scarlett and Charlie) was pulled on stage to sing Thiago Silva

But when it was later revealed he was in fact Richard Curtis’ son, who he shares with broadcaster Emma Fraud, many sceptics speculated whether the performance was in fact a set-up.

One Twitter user speculated: ‘Great for him, I’m sure, but what are the odds that the son of a pair of famous people gets this special moment just by chance?

‘Sorry to be cynical, but I’d be more delighted if it wasn’t someone from (I suspect) the VIP area, used to meeting celebrities all the time.’

Another wrote: ‘Does this count as an industry plant?’

While a third added: ‘Yes…picked out of the crowd ‘randomly’… Yes, totally believable.’ 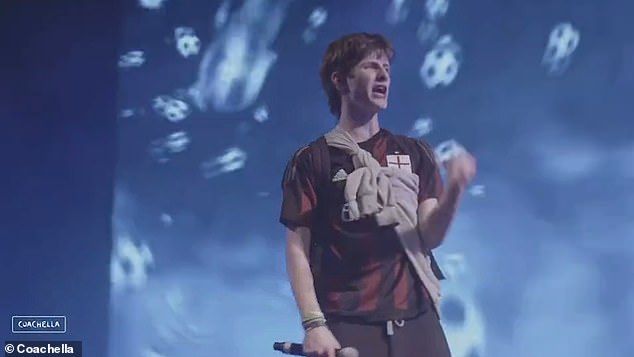 Impressive: Spike flawlessly duetted Thiago Silva with Dave, with fans cheering him on as he perfected every single song on the track, proving his incredible talents to the surprised crowd

Doubts: It was later revealed the talented fan was in fact Richard Curtis’ son, leading many sceptics to speculate whether the performance was in fact a set-up

And a fourth tweeted: ‘Wow what a coincidence that he’s the son of a very famous director – what are the chances?!’

But other social media users couldn’t help but gush over his incredible performance, with celebrities and fans alike singing his praises after Emma Freud revealed it was her son on stage.

Kirstie Allsopp said she showed her son Bay, 15, the video and said he was very impressed as she heaped praise on Spike.

While Love Island’s Millie Court, who was in the crowds at Coachella, shared a video of the moment to her Instagram Stories and described it as a ‘vibe’. 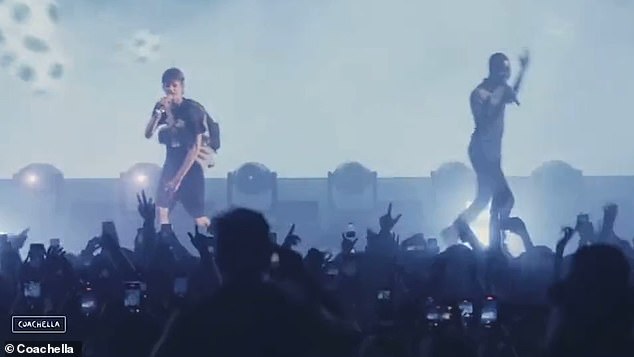 Huge fan: After the performance, Dave gushed that Spike ‘did the craziest performance of any song I’ve ever done’

She captioned the clip: ‘Ok so Dave brought someone from the crowd up on stage and he knew every single lyric and it was a VIBE.’

And one social media user said: ‘I don’t know Dave (sorry Dave!) or your son, but this gave me tingles all over!

‘What an amazing experience to have and to witness! I’m glad this had popped up on my feed! I have the feeling you are a proud mum!’

Another penned: ‘Good on your son. This is like every kid’s dream. The Foo Fighters have done this quite a lot with their fans.’ 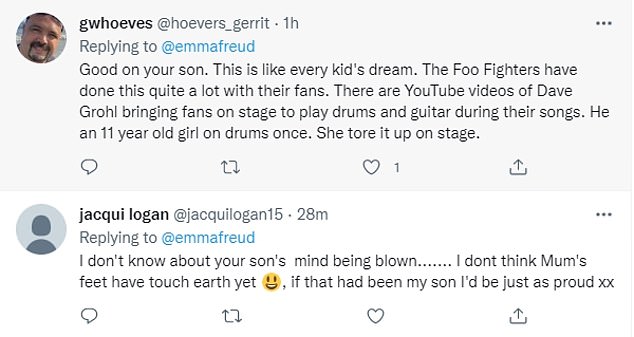 Unbelievable: Elsewhere, social media users responded share their opinions on Spike’s performance, with many saying they couldn’t believe he knew all the lyrics

A third wrote: ‘What a wonderful thing to do, something your lad will never forget. Brilliant.’

And a fourth tweeted: ‘What a charismatic young man! You must be so very proud.’

Richard’s wife Emma had taken to Twitter to confirm that the fan on stage was her son, gushing that it ‘made his life’ as she proudly shared the video of his performance.

Alongside the video, Emma penned: ‘This is so mad… my teenage boy went to a festival this weekend and THIS HAPPENED. He has worshipped Dave for 5 years and now…’

Wow! Emma Fraud had revealed that the fan was her son and said it ‘made his life’ as she proudly shared the clip of Spike rapping

Hidden talent: Emma’s daughter Scarlett, 26, also took to Twitter to share her shock at seeing her younger brother on stage with Dave, admitting they had never heard him rap before

Emma’s daughter Scarlett, 26, also took to Twitter to share her shock at seeing her younger brother on stage with Dave, admitting they had never heard him rap before.

She tweeted: ‘That. Is. My. Brother. Spike. At. Coachella WITH DAVE! He’s 18. He has school at 8am tomorrow. He was picked out of the crowd. We have never seen him rap before….’

Responding to Scarlett saying that Spike has to be back for school on Tuesday, Emma joked: ‘If he is late for school there will be trouble…’

As well as Spike and Scarlett, Richard and Emma also share sons Jake, 24, and Charlie, 20. 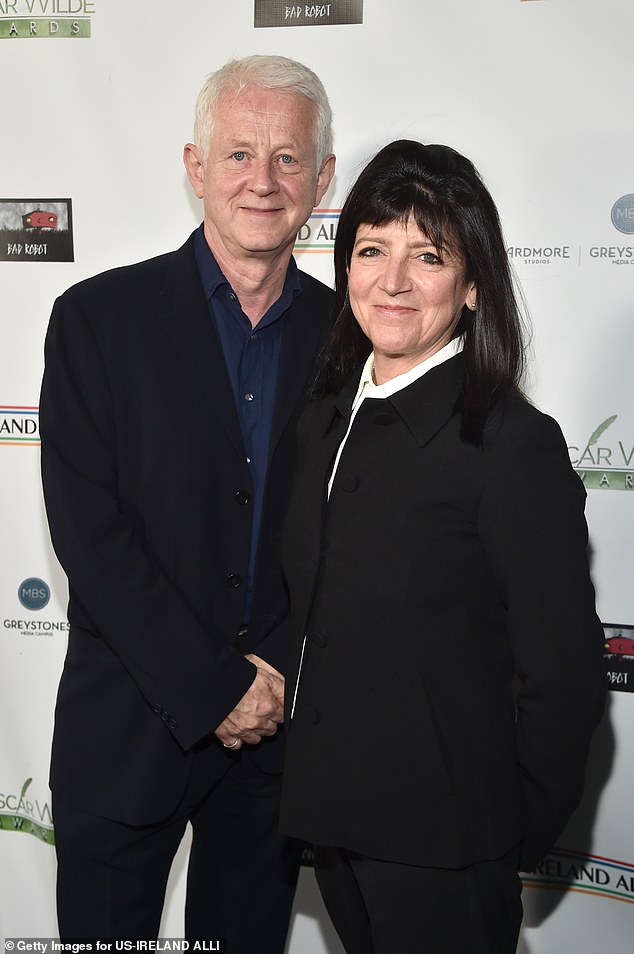