Gael Garcia Bernal knows there’s many pros and cons to getting older in the industry. But how about aging years and decades in one day?

The 42-year-old actor stars in M. Night Shyamalan’s upcoming thriller, Old, as a man who takes his wife (Vicky Krieps) and two young children on a tropical vacation and discovers a secluded beach where they and other resort guests start aging at an accelerated rate. Their time spent on the beach reduces their entire lives into a single day. The movie is based on Frederik Peeters and Pierre Oscar Lévy’s graphic novel, Sandcastle.

Shot last fall on the beaches of the Dominican Republic amid the coronavirus pandemic, Bernal couldn’t pass up the opportunity to work with Shyamalan, who’s known for his dramatic supernatural plots. When hearing about the project and being asked to read for the part, the Mexican actor tells ET ahead of the movie’s release that he “immediately” placed his “hopes and desires to manifest” the role for himself.

“I read the script and I loved it. I was incredibly happy to be a part of this, especially at the time that the film was being shot, which was at a very strong moment of uncertainty in the world… it was even more uncertain of where things were going to pick up,” he notes.

Shyamalan previously told The Hollywood Reporter that the inspiration for the film was his father’s battle with dementia and seeing his children grow up. “So I made a movie about that feeling,” the director told the magazine.

For Bernal — who is expecting his third child and first with girlfriend Fernanda Aragonés — he relates to the film’s premise “on a very basic level of just being alive and a human like any other.”

“We all understand time and there is a format for it. There’s seconds, minutes, hours, years. But in the film, what happens is all of a sudden time kicks in and half an hour equals a year or things start to move very rapidly,” Bernal expresses. “Obviously if that would occur, the shock would be so big we wouldn’t know how to react to it… Any film that I embark on, I’m hoping that [putting my life into perspective] will happen. That it would be a life-changing scenario. Being an actor, you can live many lives within one life. So every film kind of is another universe, it’s another person, a character that becomes a part of you and you become part of that character.”

That mindset is what gives the Golden Globe winner a positive outlook on aging in the entertainment industry, where growing older and one’s looks may hinder your ability to work. “We’re not talking about those,” Bernal quips with a laugh. “We’re talking artistically, creatively.” 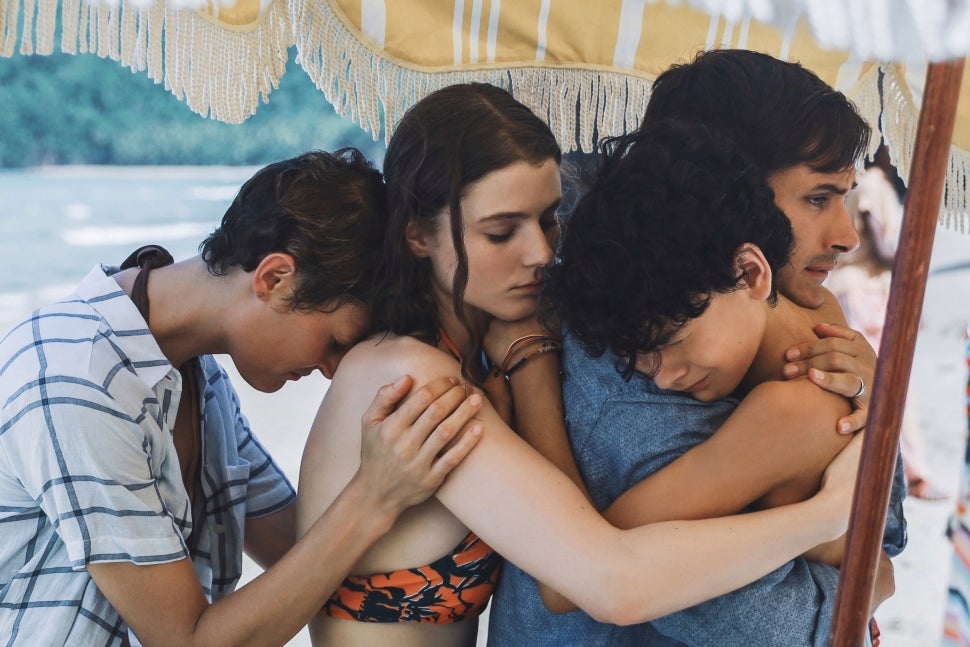 Bernal earned attention stateside for his role in Alfonso Cuarón’s 2001 film, Y Tu Mamá También, which recently celebrated its 20th anniversary. Since then, he’s worked with the likes of Brad Pitt, Kate Hudson, best friend and frequent collaborator Diego Luna, and lent his voice to the Oscar-winning Pixar animated movie Coco. Along the way, he also won a Golden Globe for the Amazon original series Mozart in the Jungle. In 2018, after departing his production company, Bernal and Luna launched the film-TV company La Corriente del Golfo.

“In every job, [growing older] gives you a lot of maturity to embark on certain discussions that occur in a film, certain premises,” he explains about being able to confidently voice one’s opinions. “It’s wonderful because you can start to put in [more work, produce]. You’ve got much more to say.”

However, he acknowledges that there are certainly cons to climbing the age ladder.

“One thing that is very different when you start getting older, it’s more difficult to do certain activities, physically, that’s normal. That’s part of life,” he says. “But you gain other things as well. It’s really nice to become a more mature actor. It’s wonderful because at the same time, the process of being an actor is playing, playing like kids. Having fun is an essential part of our job and it is wonderful that you can still have a lot of fun when you’re getting older.”

With newly bleached blonde hair, Bernal is currently filming his new movie, Cassandro. Directed by Roger Ross Williams, the film tells the true story of Saúl Armendáriz, a gay amateur wrestler who achieves international success after creating the “exotic” character (a male wrestler who dresses in drag). The film also stars Bad Bunny. Taking on a wide range of roles throughout his career and reflecting on the past two decades, Bernal couldn’t be more grateful for the years he’s accumulated in his life and as an actor.

When asked what he would tell his younger self, in his early 20s while filming Y Tu Mamá También, Bernal notes, “There’s so many people that give really good answers to this question,” before giving his best introspective response.

“Something that’s very nice about growing up is that more things stop being so important. Other essential things become just what they are, essential in a way that you focus on them,” he explains. “Maybe my only advice would be, keep concentrating on what’s essential, what you feel is essential right now, and really be very careful about considering what you think is important. And kind of always doubt yourself in that sense because that introspection is essential, [and] to not worry about things that you don’t need to worry about.”

Old arrives in theaters on Friday.