Greg Shepherd has just dropped a massive hint that his sister-in-law Sam Faiers and pal Paul Knightley have gotten married in secret.

Former The Only Way Is Essex star Sam threw an incredible Christmas bash at her home on Thursday evening and took to Instagram to share several photos and clips of the festive wonderland she created.

The 28 year old mum of two invited her sister Billie, 29, and her husband Greg, 33, to come along with their bundle of joys, Nelly, five, and Arthur, two, to have a wonderful early Christmas celebration together.

One of the many epic snaps she shared with her 2.4million followers was one of Paul, 31, and Greg appearing happy as they stood in front of a wall filled with candy-shaped balloons.

The two posed smiling to the camera as they wore matching Christmas jumpers, which featured lions wearing red Santa Claus hats and scarves.

Clearly feeling appreciative of his friend, Greg, who recently shaved his head to raise £20k for charity, took to his own Instagram stories to re-share the sweet snap.

Over it, he wrote: "In-laws," hinting that the two have transitioned from mere pals to family.

Sam and Paul first met in October 2014 in an Essex bar, not long after Sam had split from her ex-boyfriend and TOWIE co-star Joey Essex.

The reality star, who recently revealed red carpet events are her and Paul's date nights, fell pregnant with her first child, Paul, just 10 months after meeting. At the time, Sam opened up to OK! online about their relationship, saying: "We talk about kids more than we do marriage, but as a couple we want the whole package." 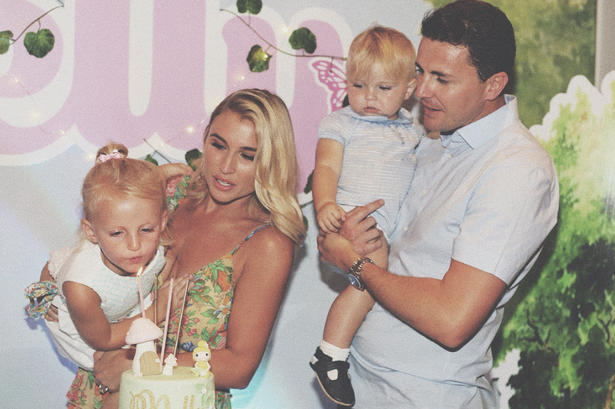 Later, in 2017, Sam had her second child, Rosie, with her boyfriend, announcing the happy news in a statement on her Instagram page.

In recent years, Sam has been dropping hints that she'd like to get married, and now it seems her wish may have come true.

It comes as the pair recently sparked engagement rumours when they enjoyed a trip to Venice without their kids.

As they documented their romantic getaway, fans couldn't help but hope Paul would take plunge and get down on one knee to propose.

As Sam posted two photos of herself and Paul enjoying a gondola ride on her Instagram, fans commented on the loved-up snaps to share their hopes of a proposal.

One asked: “Surely going to be a proposal?!” While another added: “Could this be when Paul pops the question #pleasepleaseplease #fairersknightlywedding.”

Another said: “Defo going to get a ring on this trip! Come on Paul! Lol.” [sic]

And a third hinted: “Beautiful. Lovely place for a proposal.” And another wrote: “Got to be an engagement I no a few people who got engaged in Venice.” [sic]