Gwendlyn Brown Joins Satanic Temple, May Be Done with Mormonism 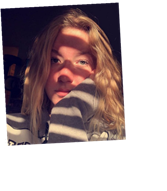 It’s looking more and more likely as if Gwendlyn Brown will not follow in the romantic or spiritual footsteps of her famous parents.

The 19-year old is the daughter of Kody and Christine Brown and she came out in August as a raging bisexual.

That was her term, mind you.

Now, while Kody and his spouses have actually been very accepting of a gay or LGBQT lifestyle, the Mormon religion as a whole frowns upon it.

And this may help explain Gwendlyn’s recent decision to join The Satantic Temple.

(For the record, The Sister Wives family belongs to the Apostolic United Brethren, which is a Mormon fundamentalist group.)

What, exactly, is going on here? Well…

“I hate being asked to explain my religious views bc I don’t even know,” the teenager Tweeted earlier this month, expounding as follows:

“I don’t know why god made eve sin then let his son die to forgive the sin that was his own fault and if he’s omnipotent why’d he let satan happen?

Faith and religion can be challenging, confusing, heavy stuff, that’s for sure.

From there, on Tuesday, Gwendlyn revealed her interest in The Satanic Temple, which does NOT worship Satan, despite its misleading name.

“Might just mess around and join The Satanic Temple,” she wrote online. “just incase ya girl needs an abortion bc we all know that right’s gonna get taken away soon.”

Here, Brown is referring to Amy Coney Barrett being confirmed to The United State Supreme Court and the strong, related assumption that she will help overturn Roe v. Wade.

Gwendlyn proceeded captioned an email confirming her membership to The Satanic Temple, writing along with it:

For those wondering, this is what it says on the Satantic Temple website:

We have publicly confronted hate groups, fought for the abolition of corporal punishment in public schools, applied for equal representation when religious installations are placed on public property, provided religious exemption and legal protection against laws that unscientifically restrict women’s reproductive autonomy.

And engaged in other advocacy in accordance with our tenets.

While Gwendlyn’s parents haven’t commented on this move yet, some Sister Wives fans have thoughts.

“Please TLC, have this storyline play out next season,” wrote one viewer, while another added:

“Meanwhile Robyn is rocking back and forth in a corner, clutching her pearls, and sobbing over Gwen’s choices.”

And then a third chimed in as follows:

“Good for her. They are a great group that does a lot of good works.”

She recently admitted that some of her siblings don’t approve of her bisexuality, which is a shame.

“I never ‘came out’ because I was never ‘in.’ I’m just bi,” Gwendlyn told The Sun this summer, sounding very self-assured and confiident for a 19-year old.

We admire her for that.

Kody Brown and Meri Brown: All the Signs It’s SO Over!Start Gallery

END_OF_DOCUMENT_TOKEN_TO_BE_REPLACED

END_OF_DOCUMENT_TOKEN_TO_BE_REPLACED
We and our partners use cookies on this site to improve our service, perform analytics, personalize advertising, measure advertising performance, and remember website preferences.Ok