Gwyneth Paltrow has banned her children from having mobile phones at the meal table because she wants them to engage in ‘great discourse’.

The Hollywood actress also insists that daughter Apple and son Moses always sit down to dinner as a family, something she learned from her parents Bruce Paltrow and Blythe Danner.

Speaking to Ruth Rogers for the River Cafe restaurant owner’s podcast, Ruthie’s Table 4, Miss Paltrow said: ‘We felt special being included at the dinner table even though it was a nightly event. If they had friends over then we sat with them at the table and had long conversations. It’s something that I have carried on with my kids as well. We always have dinner all together, as a family, no phones allowed at the table.

‘You get into great discourse with them, you hear what they think about things. 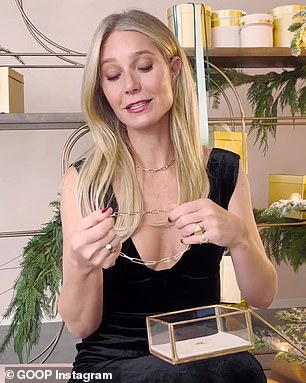 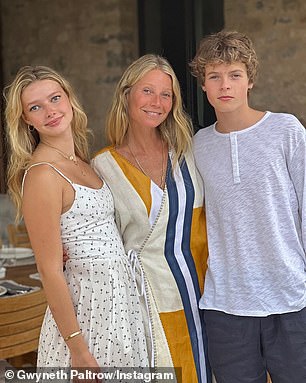 ‘I think my father made me feel that I was valuable during those dinners because he really elicited our opinions and asked questions and my brother and I were very much a part of the conversation.’

Miss Paltrow, 50, said she still cooks for Apple, 18, and Moses, 16, at weekends. This comes from her father making dinner when she was young, she adds: ‘It was such an unabashed expression of my father’s love for us, there was no denying it and when someone is so excited about the sear on their baby back ribs, it’s so imbued with love that you learn it as a love language.’

Miss Paltrow was the first celebrity to be interviewed by Baroness Rogers – who opened her west London restaurant in 1987 – for the second series of Ruthie’s Table 4 podcast, which is available today.

Other guests will include Eddie Redmayne, Dame Judi Dench and chef Wolfgang Puck. Miss Paltrow, whose lifestyle brand Goop is now worth more than £200million, told how she was left heartbroken when her screenwriter father died in 2002 while she was on holiday in Italy with him to celebrate her 30th birthday.

She was so devastated at his death in Rome from oral cancer and pneumonia that she was unable to visit Italy for a decade – until her ex-husband Chris Martin took her there to mark her 40th birthday.

The Shakespeare In Love actress is now married to American actor Brad Falchuk.