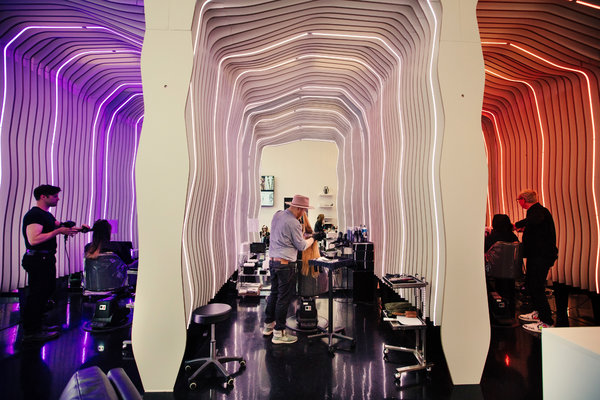 Why even go to a salon?

I thought about this one recent afternoon while I sat waiting for my turn to get my hair blown out in a crowded uptown salon. I thought of the 1939 film “The Women,” with its famous scene in a beauty salon that serves as a hub of gossip and self-care. I was living the modern version of that but couldn’t wait to get out.

For about $25 more I could have used Glamsquad or another app to summon someone to my apartment to style my hair while I listened to podcasts or pretended to work.

I was ready to consider whether I could wean myself off salons entirely, if I could pull off trimming and coloring my own hair, when I heard about a new one that intrigued me. It’s called Starring by Ted Gibson, and it’s in Los Angeles (home, I recalled, to “Shampoo,” one of the other great salon movies).

In late 2016, the stylist Ted Gibson and his husband and business partner, the colorist Jason Backe, closed their 13-year-old salon in the Flatiron neighborhood of Manhattan. A few months later, they left New York to try out life on the West Coast.

Los Angeles life suited them, and they had no shortage of famous clients — Angelina Jolie, Rachel Brosnahan, Priyanka Chopra, Anne Hathaway, Lupita Nyong’o, Jessica Chastain — but they found themselves wanting to run a salon again.

They call it a smart salon. The space doesn’t have normal chair-and-mirror stations but rather something they are calling “salon clouds,” softly rounded room dividers designed by Francisco Gonzalez-Pulido that are strangely suggestive of a vaginal canal. The lighting inside the clouds, powered by Amazon’s Alexa, can be changed among soft light that resembles “sunrise,” “daylight,” “sunset,” “twilight” and “moonlight” to see your hair in different settings.

Or, you can have it violet or orange or any color of the rainbow. I asked Alexa to cycle through all the settings. My favorite was the green light, which indicated that it represented strength. The whole thing is made for selfies, which are encouraged. Written on the mirror in lipstick was #starringhair, the desired hashtag.

On a sign next to the mirror, you are reminded that you can also play Jeopardy or Would You Rather via Alexa. Even the window displays and espresso machine are shoppable via SmileCodes, on the Amazon app. A salon news release called it “Barneys meets ‘Black Mirror.’”

If this all sounds gimmicky, it is. Still, it’s a novel way to experience a salon. I don’t know if clouds and lights and the ability to scan products is the future, but what made the salon memorable was its timeless personal touch.

There is no waiting area, for example. The salon is one open space with a sofa in front. I sat down with Mr. Gibson and Mr. Backe, and we talked about life in Los Angeles versus New York, weather and clothes, as if we were friends hanging out.

There was no hurry to begin discussing my hair, no pressure to get down to business. We all got iced coffees at the cafe next door. It felt individual and civilized and a little bit old-fashioned.

This very pleasant experience comes with an eye-popping price. Mr. Gibson charges $2,000 for a haircut; color with Mr. Backe will cost $450. But you don’t have to be rich to set foot inside the salon. I was happy to learn that blowouts start at $50 with Michael Janda and Eric Leonardos, the two other stylists working in the salon, each with plenty of experience behind them. That price is competitive with the chains — and within my budget.

The question of my hair felt almost like an afterthought. I was on my way to a meeting and wasn’t looking for any kind of big change, just a blow-dry. I wanted my blond hair to look a little more clean, a little less frizzy and a little more polished than when I walked in.

I had booked a blowout, and Mr. Gibson himself ended up doing it. He shampooed and conditioned my hair, then applied a generous amount of his Shooting Star Texture Meringue to it while still damp.

He dried my layered curly hair with a diffuser. Mr. Gibson frequently works with Sandra Oh, whose curls I like to think are somewhat similar in texture to mine. What he had in mind for me was a style with more height than I am accustomed to.

“Your hair looks Bette Midler in the ’80s,” a stylist told me as I left. I thought my big hair was reminiscent of the 1980s doing the 18th century, like the movie “Amadeus.”

Was that the look I was going for? Maybe not, but the whole experience was so comfortable that I hardly cared.

Vibe Tech-y and luxurious. Instead of a mere chair and mirror, you get your hair done in a “salon cloud” with lighting that can be changed at your whim by voice control. The salon’s news release called it Barneys meets “Black Mirror.” If you need inspiration, there are photos of celebrities and other beautiful people all over the place.

Experience Calm, quiet and friendly. There is no formal waiting area and no hurry to get you in and out.

Cost You can pay $2,000 for “the Ted Gibson experience” and live like Angelina Jolie or Lupita Nyong’o. Those of us whose finances are more earthbound can spend $50 for a blowout.