How to Watch Every Spider-Man Movie in Order

There’s one 500 pound gorilla in the room when talking about Spider-Man movies, and we’re going to get it out of the way right off the bat: there are a lot of them. We know this. You know this. Hell, Marvel Studios President Kevin Feige knows that we all know this—hence the reason why Spider-Man: Homecoming, the first film in the third series of the last 20 years to feature the webslinger, skips the character’s origin story entirely. At this point, everyone knows what happened to good old Peter Parker, the nice boy who likes Science from Queens just trying to get through high school. And yes, he winds up with more power, and responsibility, than he ever expected.

But some people may just be getting into the Spider-Man world for the first time. After all, a new movie—Spider-Man: No Way Home—is due out later this year. And there are rumors out there—unconfirmed rumors, with emphasis on the rumors part of that—that suggest that this movie could be some sort of live-action Spider-Man multiverse movie (and, uh, SPOILERS, but certain recent MCU developments make that seem exceedingly likely). Which would theoretically bring previous Spidey actors Tobey Maguire and Andrew Garfield right back into the mix alongside current Peter, Tom Holland.

Yes, it’s a lot. But long story short—you might way to brush up. Maybe you’ve never seen any Spider-Man movie before and want to brush up before…all of that happens. Maybe you have seen them, but missed one here or one there. Maybe you’ve seen them all, but not in a while, and need a guide to see where the hell to even start. Anything is fine—again, there are a lot of these. Luckily, we’re fully versed in Marvel’s most popular superhero, and all of his big cinematic appearances. Let us be your guide.

What we’re mostly going to advocate for here, just like we suggest with the MCU at large, Star Wars, and the Fox X-Men movies, is to just watch the movies in the order they came out. Why not? That’s the order that someone watching them in real-time would’ve seen them, an it just makes sense. Now, if you don’t intend on watching every Spider-Man movie, then of course you don’t have to. But with each different grouping, we do recommend watching them from the beginning to the end, and that’s pretty universally going to be in release order.

Now, something to keep in mind: these four different groupings of Spider-Man movies aren’t connected right now—at all. That could change. Marvel has clearly worked with Sony before (hence the entire existence of Tom Holland in the MCU as Peter Parker/Spider-Man), so it wouldn’t be crazy at all to see it happen again. In fact, the trailer for the upcoming Morbius (in Sony’s Spidey universe) even teases an appearance by Michael Keaton’s Vulture. So who really knows. But for now, you could basically watch the Raimi Spider-Man movies and stop. Or you could just watch the Marc Webb movies. Or just the MCU ones. They aren’t connected; sort of just separate groupings. But depending on what No Way Home does, these could all start to cross over. Anyway, let’s get to it, shall we?

While you probably don’t have to watch every Spider-Man movie to understand the character, director Sam Raimi (The Evil Dead series, The Gift) came out of the gates with two all-time classics of the superhero genre. With Spider-Man, he got an entire generation hooked on the webslinger. The origin story presented here is the one that stands out most when anyone thinks about Spider-Man, and it’s almost impossible to think of anyone other than Tobey Magure, Kirsten Dunst, and James Franco as Peter Parker, Mary Jane Watson, and Harry Osborn, respectively. And Willem Dafoe predictably gives an all-time villain performance as Norman Osborn/Green Goblin. Just an absolute classic of the genre and essential for any Spider-Man fan.

Raimi’s Spider-Man 2 picks up not long after Spider-Man left off, and some would argue that this is a rare case where the sequel actually exceeds the original. Here, Parker finds a new mentor in Dr. Otto Octavius (Alfred Molina), who eventually finds he cannot contain his own technology, becoming the villainous Doctor Octopus (or Doc Ock) in another all-time villain performance. The train scene is hard to ever forget.

Things go off the rails a bit with Spider-Man 3, which is a bit overstuffed in, well, just about every way. But if you watch it through the lens of Raimi returning to his campy Evil Dead roots, it can actually still be fun. Newcomers here include Thomas Haden Church as the boring Sandman, Topher Grace pretty badly miscast as Eddie Brock, and Bryce Dallas Howard as Gwen Stacy. It’s a lot! Whatever! Let’s take this space, too, to quickly shout out J.K. Simmons, who so brilliantly plays newspaper publisher J. Jonah Jameson in all of Raimi’s films. 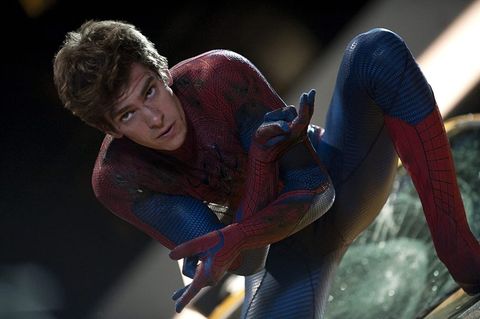 A Spider-Man 4 from Sam Raimi and starring Tobey Maguire was about to start production when Sony suddenly shifted course, abandoning that project and instead opting for a full franchise reboot. The result was the Amazing Spider-Man films, which starred Andrew Garfield (who was cast when he was largely unknown, before the release of The Social Network) and were directed by Marc Webb (500 Days of Summer). This first movie in the series is…fine, and it largely recounts a similar Peter Parker origin story. Some slight changes include the movie’s main villain being The Lizard (Rhys Ifans), and Emma Stone playing Gwen Stacy. Garfield’s Peter is a lot cooler than Maguires, and Webb—a music video director before his cinematic turn—includes some cool needle drops.

Things fly way off the rails here! Garfield does his thing (he’s a great actor), but the movie is way overstuffed with villains (Jamie Foxx as a blue Electro, Dane Dehaan playing a strange Harry Osborn, and a very brief Paul Giamatti appearance as a techno-version of Rhino) and generally is just…a lot. The series did not continue after this one.

Spider-Man: Into the Spider-Verse is not related in themes or story to any of the above movies, but it does help to have a general idea of Spider-Man/Peter Parker and his whole deal before checking this one out. The main character here is Miles Morales, a high schooler who finds himself getting Spider powers. And then he learns he’s not alone—in a lot of different ways. This not only might be the best Spider-Man movie, but it’s one of the best movies of the last decade overall. A stellar cast includes Shameik Moore, Mahershala Ali, Liev Schreiber, Hailee Steinfeld, Kathryn Hahn, and way more. A sequel is coming in 2022.

Spider-Man is not in Venom, nor is he even referenced. But the character and story of Eddie Brock and Venom is historically and always inherently tied in with that of Peter Parker/Spider-Man. And with Michael Keaton showing up in Sony’s upcoming Morbius movie as Adrian Toomes/Vulture, the potential for these movies to eventually tie in with Tom Holland’s Spider-Man is on the table. Even if it doesn’t conneect, though, Venom is so outrageously fun and campy—and it has a Tom Hardy performance that really just goes for it in every way you ever want from him—that it’s worth a watch when you have some time and are looking for something to just have a blast with. A sequel is coming later in 2021.

After the Amazing Spider-Man series kind of fizzled out, Marvel Studios and Sony came to an agreement: the MCU can use Peter Parker/Spider-Man in its movies, and can produce films starring Peter Parker/Spider-Man with Sony, for movies set in the Marvel Cinematic Universe. Incredible stuff. And not long after this deal was made, it became clear that Marvel Studios was going to cast its new Spider-Man—who, of course, ended up being the perfect Tom Holland—and get him right into a movie. That movie? 2016’s Captain America: Civil War, which got Spidey a new suit, a meeting with Tony Stark, and right into the action in the movie’s super memorable airport fight. A little taste of what was to come.

Spider-Man’s first solo entry in the Marvel Cinematic Universe is Spider-Man: Homecoming, which is one of the best movies in the whole MCU. As mentioned before, the movie skips Peter’s origin story, instead picking up right after the events of Civil War. The movie first and foremost establishes that Holland, yes, is perfect in the role. It then goes deep on the relationship between Peter and Tony Stark, Peter and his friends Ned, Liz, Flash, and MJ, and, Peter and his Aunt May (here played by Marissa Tomei). But maybe the standout of the movie is Michael Keaton as Adrian Toomes/Vulture, who is simply the best kind of villain—one who has a point.

Holland’s Peter Parker gets even more embedded in the Marvel Cinematic Universe when he flies into space for Avengers: Infinity War, which picks up not long after Homecoming. He not only spends time with Tony, but meets Doctor Strange, and the Guardians of the Galaxy too. He also delivers one of the most heartbreaking lines in the entire MCU. You know the one.

Spidey’s role in Endgame is small but super important and memorable. It’s a huge movie—what can you expect!

The first post-Endgame movie or show or anything in the MCU was Spider-Man: Far From Home, which picks up with Peter Parker dealing with the aftermath of the events everyone saw play out in Endgame. Nick Fury and Maria Hill (Samuel L. Jackson and Cobie Smulders) are in as Peter’s mentors of sorts here, and Zendaya as MJ has an increased role, which is a smart move all around. The action travels overseas, and the action and humor comes with it. Perhaps the best part of Jon Watts’ Spider-Man movies (he’s directed both so far in the MCU and will also be helming No Way Home) is that they’re just as much high school/teen/coming-of-age movies as superhero movies. Jake Gyllenhaal makes his Marvel debut here as Quentin Beck/Mysterio, which is a fun full circle thing, considering at one point he almost took over for Tobey Maguire in Spider-Man 2.

And that’s it! At this point, all you can do is just gear up for Spider-Man: No Way Home. That, or, you know, get into some comics—if you want to do that, might we recommend Todd McFarlane’s Spider-Man run?