James Corden impersonates Anna Wintour – bob and all; Gayle King dons ‘so many Spanx’ at gala 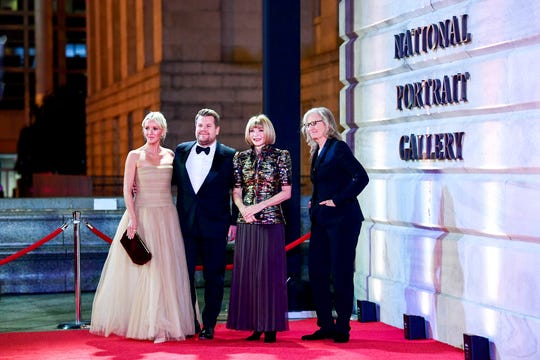 WASHINGTON – James Corden clearly subscribes to the idea that “imitation is the sincerest form of flattery.”

The West Coast talk show host made at trip to the East to present Anna Wintour with the Portrait of a Nation prize Sunday at the National Portrait Gallery. Lin-Manuel Miranda, Earth, Wind & Fire, Jeff Bezos, Indra Nooyi and Frances Arnold were also recipients honored at the 2019 American Portrait Gala.

“The Late Late Show” host made his entrance donning a wig shaped to match the Vogue editor in chief’s chestnut, chin-length bob, sunglasses and a fur-trimmed coat.

“Anna Wintour has not had much impact on my life,” he joked beneath Wintour’s signature look, drawing laughs from the crowd. “I have never felt more powerful than walking backstage dressed like this. It’s incredible. I’m walking, I’m like, ‘Bezos, get me a coffee.’ “

After removing his costume, Corden continued.

James Corden recalls confronting Ivanka Trump at a wedding: ‘You can do something’

“It’s an honor to be here,” he said, telling the crowd he and Wintour first crossed paths in 2012, when he was acting in a Broadway play.

“She knew that my wife and I had moved to New York with our one-year-old son, and she asked if there was anything I needed whilst I was in the city,” Corden recalled. “I replied, ‘I just need a friend.’ And Anna said, ‘I can do that.’

“So, the next day, somewhat cheekily I dropped her an email asking if we could become best friends,” Corden continued. “And this set in motion, without question, one of the most rewarding and enriching friendships of my life.”

Thinking of her career, the “Cats” actor added, “For over 40 years, she’s devoted her life, her blood, her sweat and tears to the fashion industry, and you would be right in thinking it is the most elegant sweat in the world.”

“I am beyond proud that the single most influential person in American fashion is an immigrant from the United Kingdom,” he said, before upping his compliment, deeming her possibly “the most iconic, female immigrant since the Statue of Liberty herself.”

So Miranda Priestly: Meryl Streep is co-chairing the 2020 Met Gala (with Emma Stone)

When it was her turn to step to the mic, Wintour took playful jabs at her pal.

“James, thank you for an introduction that can only be called unusual,” she said. “I wouldn’t dare say whether you or (‘The Devil Wears Prada’ star Meryl Streep) did it better, but I can say that I’ve never in my life felt so incredibly flattered and yet, at the same time, frightened.”

Wintour also made a crack at her own expense.

“I want to thank the people at the National Portrait Gallery, the remarkable (director Kim Sajet) and her selection committee, for whatever lapse in their otherwise impeccable judgment led to me being here tonight.” 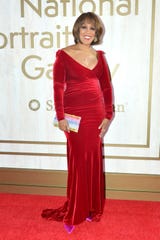 Gayle King dons a dress that she says is a little too snug. (Photo: Shannon Finney/Getty Images)

Gayle King, who served as master of ceremonies, made note of the Wintour’s playful demeanor, making a remark about the presence of her smile.

King herself induced smiles with her off-the-cuff commentary. The “CBS This Morning” anchor kicked off the night talking about her form-hugging Marc Bouwer dress.

“Do you guys know what it’s like to sort of give up food for three days and you still can’t fit into the dress?” she asked. “I have on so many Spanx tonight that I may need medical attention. And this is no joke, Joan Collins – this happened to her on the red carpet – she passed out because her dress was too tight. I know there are doctors in the house, so if I pass out, just discreetly drag me off the stage, cut them off, and I’ll be all right.”

Oprah Winfrey reveals her favorite things for 2019: Here are the most and least expensive items

Prior to the show, King talked to reporters about the dress she found it difficult to sit in. “I can’t move,” she said. “I can’t eat a friggin’ raisin.”

King said she has been waiting to wear the red dress. 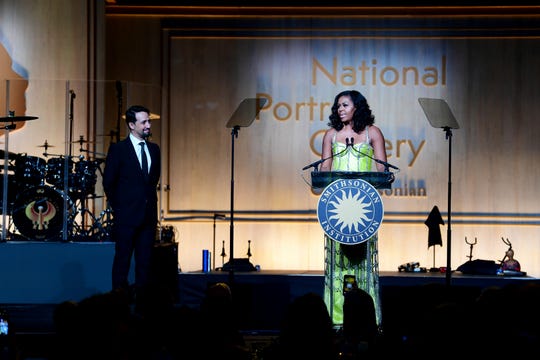 The “Becoming” author, on-hand to present Miranda with his award, looked absolutely stunning in the dress, with her hair in curls.

“I could not be more proud to present the Portrait of a Nation Prize to someone who has, in melody and rhyme and connection, painted as honest a portrait of our country as I have ever seen, one that we all can celebrate,” Obama said in tribute.