Jana Kramer and Michael Caussin are officially divorced. Per court documents obtained by HollywoodLife, the two will share joint custody of their children.

After nearly six years of marriage, country music singer Jana Kramer and Michael Caussin have finalized their divorce. The two dissolved their marriage at the Williamson County Chancery Court in Franklin, Tennessee on Thursday, July 22 on the grounds of irreconcilable differences. It comes three months after the singer, 37, filed for divorce from the football tight end, 34, citing “adultery” as well as irreconcilable differences.

According to court documents obtained by HollywoodLife, the two will share joint custody of their children Jolie Rae, 5, and Jace Joseph, 2. Living primarily with their mother, Jolie and Jace have been allotted 240 days with Jana and 125 days with Michael. Jana is also expected to pay her ex-husband $3,200 a month in child support, per the documents.

“The Mother and Father will behave with each other and each child so as to provide a loving, stable, consistent and nurturing relationship with the child even though they are divorced,” the document read. “They will not speak badly of each other or the members of the family of the other parent,” it continued. “They will encourage each child to continue to love the other parent and be comfortable in both families.” 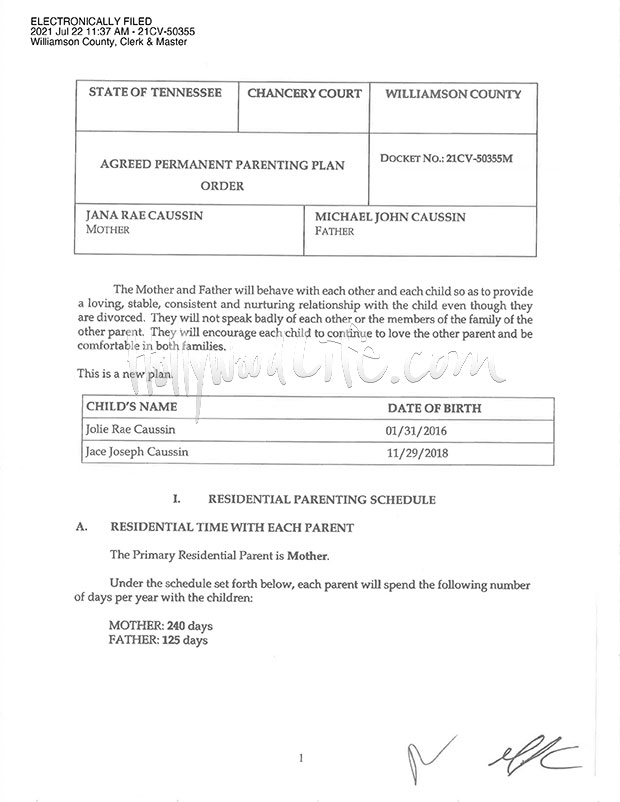 The duo wed in 2015 and have weathered many storms since, including Michael’s cheating scandal and sex addiction treatment. The divorce marks their second split, as Michael previously filed for divorce before in 2016. It all came to a head in April, when Jana revealed the two were splitting again for good on Instagram, writing that “it’s time” in a lengthy statement.

“As I try to make sense of a reality I never wanted to believe could be possible again, those words have now become a reality,” the singer and actress wrote. “I’ve fought y’all. I’ve loved hard. I’ve forgiven,” Jana added, referring to Michael’s infidelities. “I’ve put the work in. I’ve given everything I have, and now I have nothing else to give.”

She added that she still “whole heartedly” believed in marriage. “Please know that I still believe whole heartedly in marriage, love, and rebuilding,” Jana continued. “I just can’t fight any longer. It’s time to heal. Thank you for all the love, heart, and support, in many ways you have fought on this journey alongside me, and for that I am grateful.”