Bruuuuuuuuce! No, you aren’t listening to the chant of fans at a Springsteen concert. That cheer is for Bruce, the so nicknamed full-scale shark model from Jaws, the iconic 1975 film that continues to make beachgoers afraid to go into the water. Now they can also be afraid to visit the Academy Museum of Motion Pictures, which in 2016 acquired the fourth and final and only surviving version of the shark model derived from the original Jaws mold, and on Friday finished up on the weeklong installation at the much-delayed and eagerly awaited museum which is on track to finally open to the public on April 30, 2021. 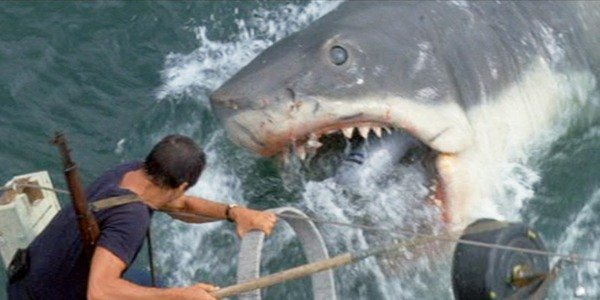 The Jaws attraction is not only significant for the Academy and its new venture because of the fact the film won three Oscars (Film Editing, Sound, Original Score) and was nominated for Best Picture, but also as a bona fide superstar draw that is the kind of thing the ambitious museum will need to entice the public through its doors. But it wasn’t easy, as the Academy explains: 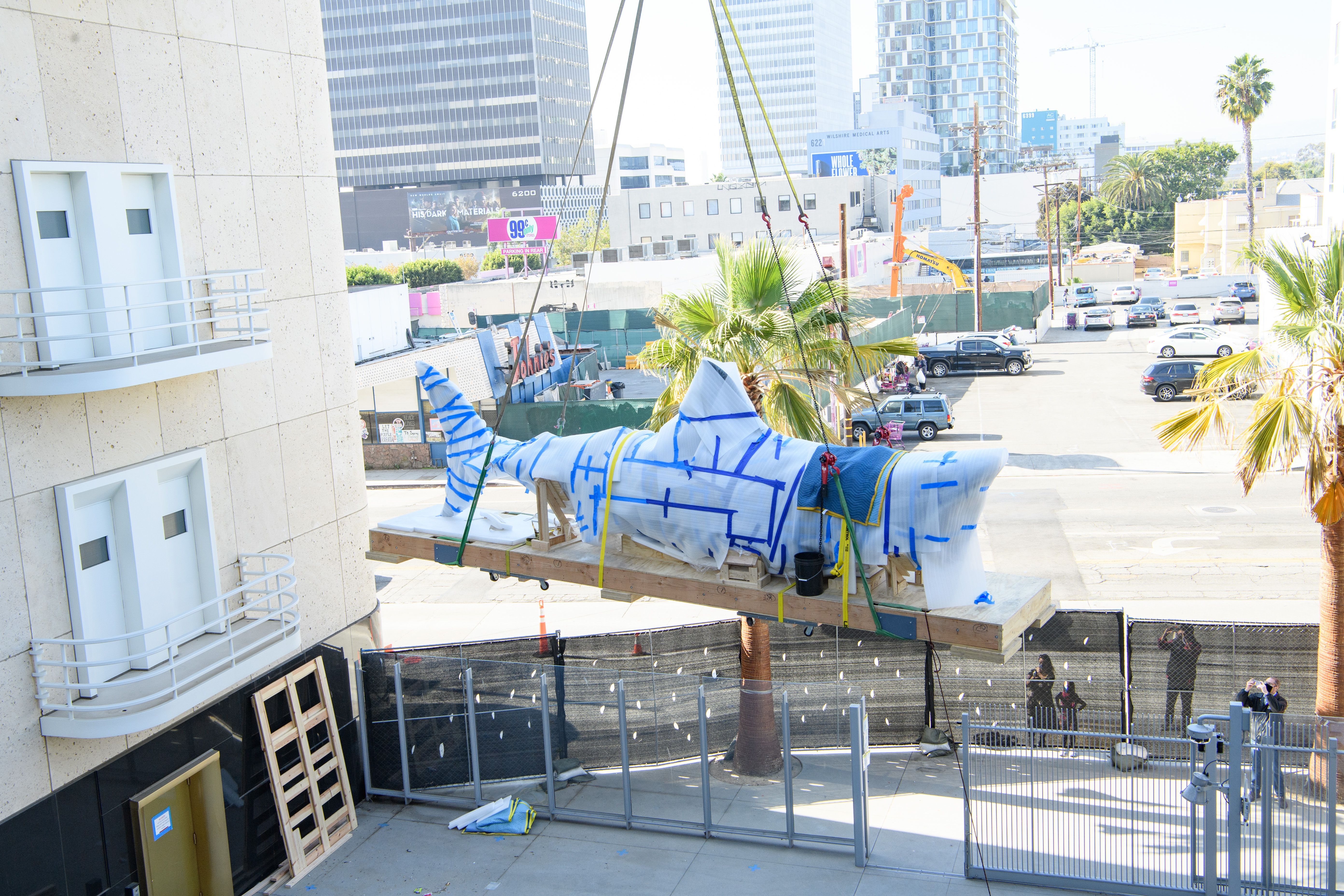 “The creation of the infamous mechanical shark—which director Steven Spielberg (a member of the Motion Picture Academy’s Board of Governors) is rumored to have named “Bruce” after his lawyer—was tasked to art director Joe Alves, whose original schematics depict the 25-foot-long body, 400-pound head, and jaws nearly five feet wide. The three screen-used production molds cast in latex and rubber rotted and were destroyed. The Academy Museum’s version, cast in fiberglass for photo opportunities at Universal Studios Hollywood surrounding the film’s 1975 release, survived at Universal until 1990 when it found its way to Nathan Adlen’s family’s junkyard business in Sun Valley, California. In 2010, it was authenticated by Roy Arbogast, a member of the original Jaws film’s special effects crew, and in 2016, the Academy Museum acquired the shark model through a contribution by Nathan Adlen. The museum worked with special effects and make-up artist Greg Nicotero, co-founder of KNB EFX, meticulously restore the fiberglass shark which had deteriorated from being outdoors for 25 years.” 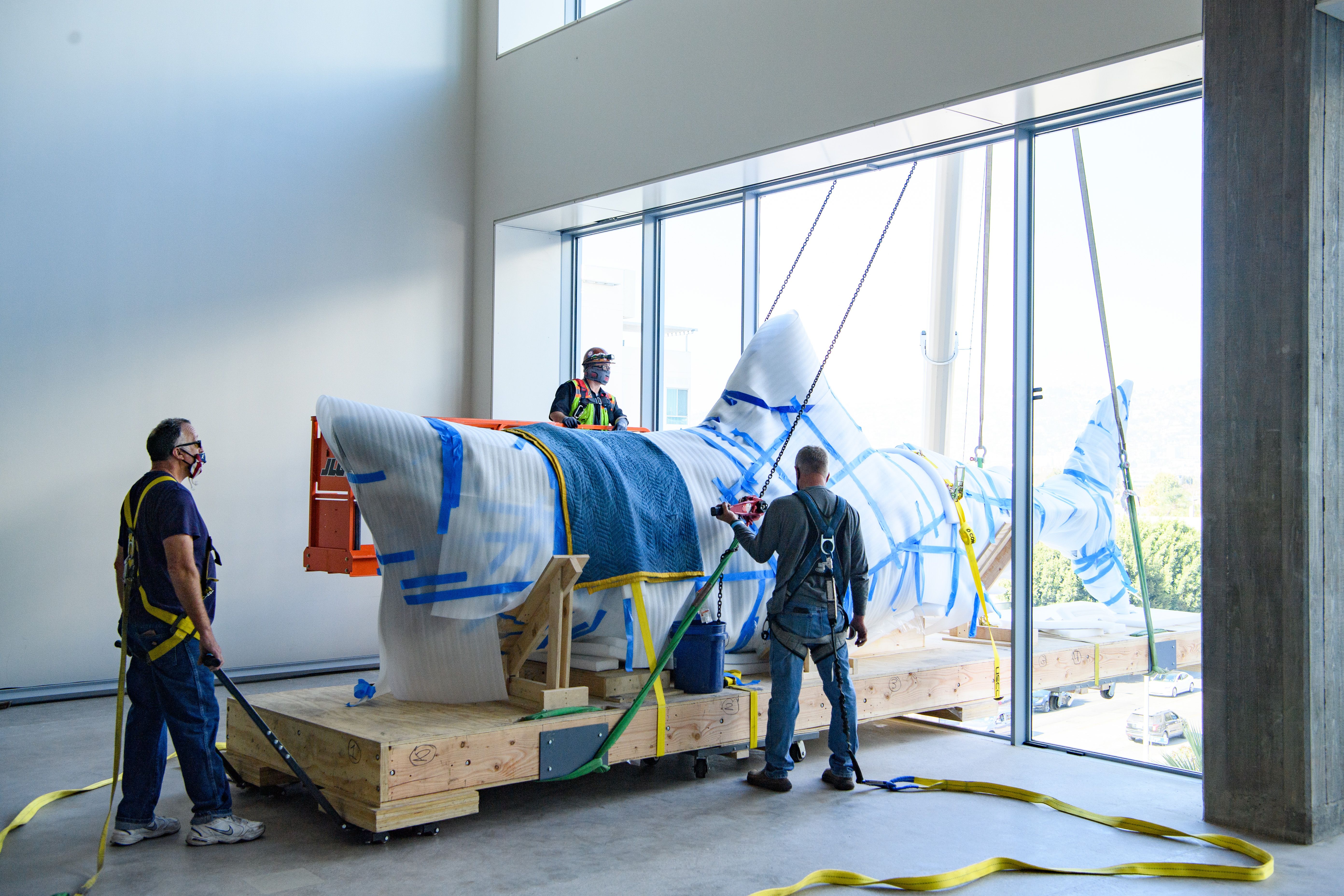 Museum officials are thrilled to finally have it in place.

“It’s been a long journey for Bruce since he was acquired in 2016, and we couldn’t be happier to welcome him to his new home,” said Bill Kramer, director and president of the Academy Museum. “We look forward to our opening when museum visitors can engage with our exhibitions, experience our beautiful Renzo Piano-designed building, and come face to face with one of the most iconic characters in film history.”

The shark represents the largest object in the Academy’s entire collection thus far, and in fact is so large it couldn’t take the elevator to its new resting place in the Saban building. Instead, a group of engineers, art handlers and construction workers had to gingerly move two panels of the building’s curtain wall of glass in order to crane it into place (check out a video of the process below).

Bruce is now permanently suspended 30 feet above the third floor and visible from different vantage points both inside and outside the Saban. If during the next big earthquake you notice a large shark around the intersection of Fairfax and Wilshire, you will know Bruce got loose. 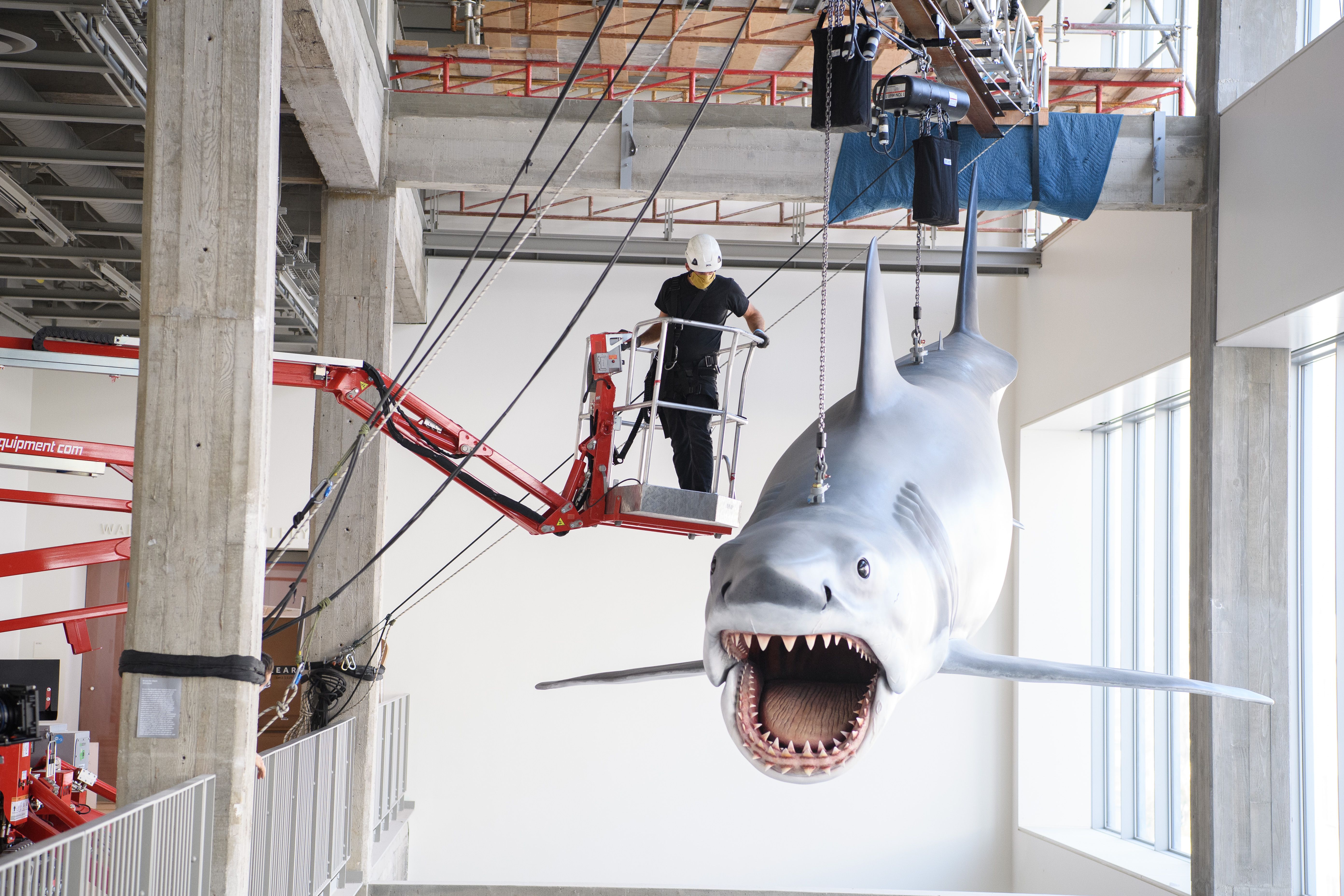 Here are the pertinent facts:

Check out the video of the install here: