When hosting ‘The Joe Rogan Experience’ podcast, the comedian claims it’s unnecessary to get the shot for people at the age of 21 as long as they are ‘exercising’ and ‘eating well.’

AceShowbiz –Joe Rogan has landed in hot water over his recent remark regarding COVID-19 vaccine. After suggesting young healthy people to skip the vaccination, “The Joe Rogan Experience” host found himself being labeled “stupid” by some social media users.

“Look, don’t do anything stupid, but you should take care of yourself,” Joe further noted. “You should — If you’re a healthy person, and you’re exercising all the time, and you’re young, and you’re eating well, like, I don’t think you need to worry about this.”

Joe has since drawn criticism from many on Twitter. One in particular argued, “Joe Rogan told young people not to get the COVID vaccine. Stupidity is the most serious pandemic, and Joe Rogan is a super-spreader of it.” Another added, “If your 21 years old and taking medical advice from Joe Rogan you’re probably too stupid to figure out where to get a vaccine anyway.”

The backlash continued with one stating, “If you’re a young person, get your advice on vaccinations from the CDC and NOT from Joe Rogan. Thanks for coming to my TED talk.” Someone else chimed in, “I normally don’t want to limit someone’s speech, but I really wish people would shut up about telling others not to get the vaccine. It is harmful.” 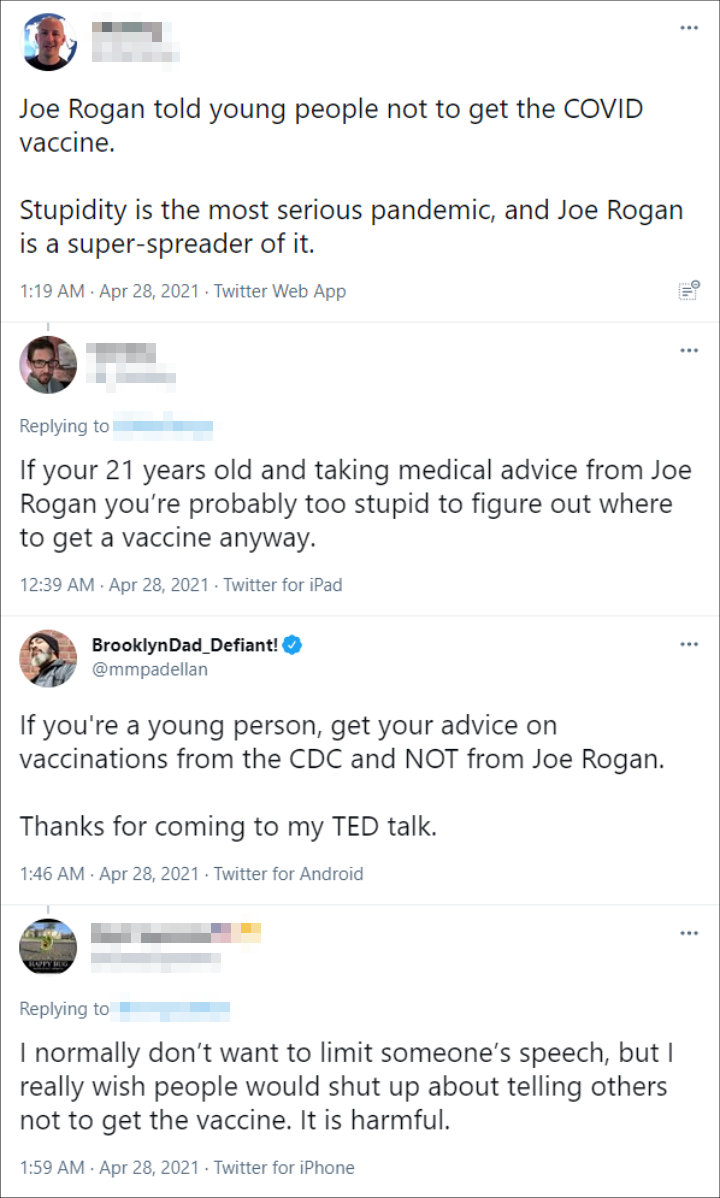 While many called out the comic, some others jumped to his defense. One in particular was conservative commentator Liz Wheeler who penned, “Joe Rogan is correct about the COVID vaccine for kids & young healthy people.”

British rapper Zuby also shared a similar idea. He tweeted, “Joe Rogan said that he doesn’t think healthy 21 year olds should take the ‘rona jab. That makes perfect sense. I actually think that’s why the usual weirdo mob is attacking him. Because he’s correct. They hate that. Psychopaths all over this app.”