Joe Wicks promotes his fitness remedy for the nation 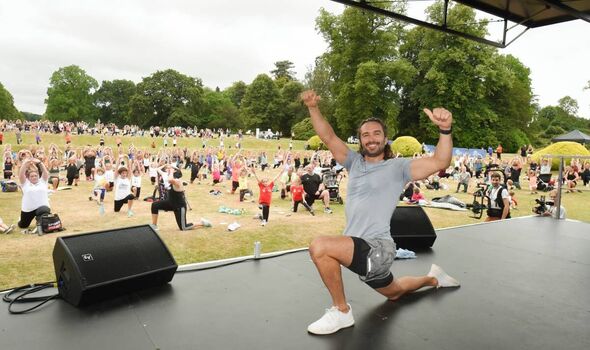 With 4.5million Instagram devotees, the self-styled ‘Body Coach’ is now the proud owner of an MBE thanks to his YouTube videos during the pandemic. Passion, positivity, and determination have driven the 37-year-old’s success, but as he confides today, the secret ingredient in his ascendency to near-national treasure status is his wife of four years, former model Rosie Jones.

“Rosie is 100% pivotal to my success,” Joe admits. “I met her as I was becoming famous and things were blowing up, and I was in love from the moment I met her. I didn’t get tempted by the nightclubs and red carpets and fame. Instead, I’ve just been focussed on being a good dad and just being the Body Coach.

“I don’t get distracted by any of the other things that come with being recognised and having the sort of audience I have.”

Raised on an Epsom council estate with older brother Nikki – now CEO of his company – and their younger brother George, Joe’s early years were worlds apart from the no-expense-spared upbringing he’s able to provide for his own children, Indie, four, Marley, three, and four-month-old Leni..

His roofer dad Gary, now 62, struggled with heroin addiction, and his mother Raquela’s OCD-fuelled anxiety and depression meant domestic stability in the Wicks household was only ever fleeting. It’s clear today that those early experiences shaped Joe’s attitude towards relationships.

“My mum and dad were never married, and I didn’t believe in marriage,” says Joe, whose latest venture is three days of pop-up fitness events this weekend in Central London, designed to combat the tendency people have to abandon their New Year resolutions to get fit in mid-January.

Today, he smiles as he tells me: “The glue that holds me and Rosie together is commitment. That’s what we both really value and when I met Rosie, I loved the idea of us being grandparents with our kids and showing you can stay together and be happy.

“We both also love raising our kids as lovely people and just being present with them. We’re so joined by that, that we don’t often disagree, and I learn so much from Rosie just by watching her. She’s quite naturally patient whereas I’m impatient. I have to work at it but for her it’s really easy.”

When Joe’s not demonstrating burpees to his online disciples, he’s likely to be found burping new arrival Leni or hanging out with Rosie, 32, and the children at their five-bedroom £4.4million Surrey mansion.

“Leni is amazing,” gushes Joe. “She’s got such beautiful olive skin; she looks like she’s got a tan every day. She’s really cute, and she’s just slotted in really well.

“I thought it was going to be a big jump between two and three, but because Indie is four, she dresses herself and she’s a bit more independent, so it’s definitely not as stressful as I thought it would be.

“I’m lucky in that I can work from home, so we have that teamwork element. I think it would be very hard if I was just out the door at seven and Rosie was on her own, but we’ve got a good balance and we take turns with the school run and stuff so one of us gets to have a little lay in and catch up on our sleep. But so far, it’s working out well.”

Also working out well is Joe’s improving relationship with his father Gary, which he examined in last year’s emotional BBC documentary Joe Wicks: Facing My Childhood.

“He’s clean right now but he’s still doing the twelve steps and going to the NA meetings, which is an important part of his recovery,” says Joe.

“I’ve just learned to pull him in a bit more, to get him to come round for a bit of dinner or I’ll say, ‘Let’s go out on the motorbikes for a few hours,’ so rather than let him isolate I’ll say to him, ‘You need to be doing all the things that work for you, so let’s go for a walk or let’s go for dinner.’

“He’s got to find other things that make him feel good and that’s ultimately connection, family and going to meetings.”

With his genetic history, Joe has clearly spent time pondering the nature of addiction, and he’s careful to keep tabs on his own obsessive nature.

But do I worry about having that addictive gene and would a really difficult life experience derail me to the point where I turned to booze or drugs?

“I certainly don’t have that temptation. I’ve got a good relationship with alcohol. I can go out and have a really great night, have a drink. And that’s it.

“It’s once every few weeks, once a month and I’m okay with that, whereas some people get in a rut, and it goes on for weeks or months. I know exercise makes me feel good and I know alcohol makes me feel terrible and down the next day so for me, the negative side effects of drugs and alcohol would be so overwhelming, so I just don’t think I’d ever turn to that.”

Obsessive working on the other hand is tougher to rein in. “People might say I’m a workaholic,” he laughs. “But I love it and don’t think of it as a negative thing, but you do have to try not to let it affect your real relationships.

“I have a virtual world where I can speak to people all day, every day for hours and hours on this phone.

“But I also have to have a real-life experience with my wife and kids and my family and friends, and if you can have that balance, I think you can actually have both.”

Connection is clearly central to Joe’s ethos, and his success has allowed him to cultivate several high-profile friendships with stars he used to admire from a distance.

“The people I have connected with are the people who I’ve always loved and watched from afar, people like Russell Brand, Jamie Oliver, Gordon Ramsay and Louis Theroux. With Jamie, it’s weird. When I was 16, I used to come home from school and watch him on The Naked Chef and think, ‘I love this guy.

“I love watching him cook,’ and a few months ago there I was round his house with my whole family and he’s cooking this amazing Sunday roast for all of us.

“I’m not someone who is out with different celebrity mates week after week. I’m not a party guy but I think you’re only drawn to the people who inspire you and have a positive energy about them. But me and Jamie aren’t hanging out all the time though. That’s the first time I’ve been round his house, but I took my kids, and we had a great day.”

The most immediate challenge for Joe, before taking his PE With Joe on tour first to Australia next month, then onto America later this spring, is to dissuade flagging fitness enthusiasts from ditching their positive new year fitness intentions.

“The middle of January is when numbers drop off and people stop going to the gym and everyone loses focus,” he says.

“I hope people coming along to my pop-up sessions will feel reinvigorated and I hope they’ll go away buzzing from the exercise and take with them some practical tips on how to create sustainable change. That’s what I’m trying to achieve.

“I know it’s not easy with the pressures of social media and the cost of living and everything else going on in the world, but you can’t just turn to food and alcohol and drugs and gambling or Netflix to make you feel better, because it doesn’t work.

“Thinking about how you exercise and what you put in your body isn’t optional anymore – it’s essential.”