Johnny Depp Bodyguard Says He Started To Notice Injuries On HIM, Not Amber Heard!

Another huge blow for Amber Heard‘s legal team — but is it more progress up an insurmountable hill?

Johnny Depp‘s bodyguard was the next to testify in the ongoing defamation trial on Thursday, and the way he tells it, the couple’s relationship was much closer to the Pirates of the Caribbean star’s version.

Malcolm Connolly worked for Johnny for years, throughout the entire relationship with Amber. He described the beginning of the courtship as many have — “lovey-dovey” — and said Amber was “lovely” and “charming” at the start. But, he claimed, he noticed she changed at some point early on:

He said the future Aquaman star could “get a bit frosty at the drop of a hat.” But it wasn’t just her that was changing. He says he noticed Johnny shutting down, “getting quieter” the longer they were together.

Speaking to the former couple’s most private fights, he claimed he often heard Amber “screaming.” While he never saw any violence on either of the pair’s part, he says he did witness her throwing objects at him, including a cigarette lighter and a soda can.

He also saw what could be interpreted as evidence of violence. Not on Amber, he said — but on Johnny. He recalled:

“It started off with maybe a scratch once in a while, but it got more. He sustained marks, definitely.”

“Most of these marks, most of these things, would be on the left side of his face, scratches on his neck, maybe a fat lip in the corner, maybe a bruising in the eye socket. It’s all impacts. It was getting more regular. Not every week, but it was definitely happening.”

Even on his honeymoon, Connolly remembered, Johnny was walking around sporting what might have been a black eye. Depp’s team showed a photograph of Johnny, Amber, and their staff in which the Oscar nominee’s face could be seen as showing some “swelling” under the eye. 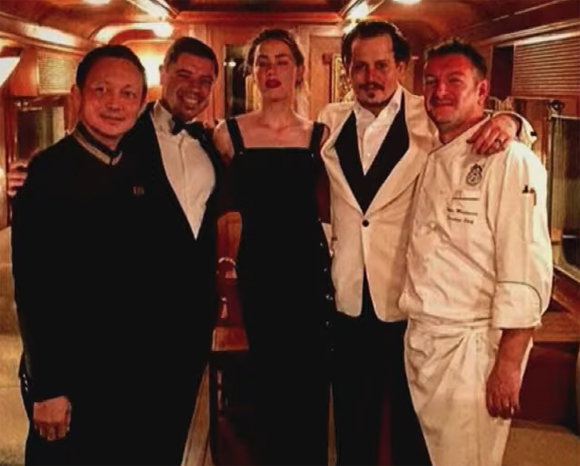 Connolly was asked for his interpretation of the injury, and he said, eliciting a laugh:

He recalled a couple days into the honeymoon Johnny was “not enjoying” it anymore and would often sneak off to use drugs. Connolly could only confirm seeing him smoking weed, but he suspected he was doing cocaine in the bathroom. He noted his boss had a “very high tolerance for any substances,” saying at one point:

“I think Jack Sparrow is more drunk than Johnny Depp, to be honest.”

He also noted that Johnny’s drinking had “dropped drastically” in recent years.

Connolly was also present for the infamous incident in Australia where, as he put it, “Johnny lost a finger.”

Describing the incident as “chaos,” he recalled his boss was already “nursing one hand” when he arrived on the scene. As he tried to pull Johnny from the scene, he said, an “irate” Amber “appears from somewhere and she’s screaming, berating him, ‘F**k off, that’s what you do, it’s all you ever do, you f**k off with your guys, you f**king coward!’”

On cross, Amber’s team asked about the claims Johnny had tried to “urinate in the foyer” in front of everyone. The affable Connolly laughed:

“I think I would have remembered if I’d seen Mr. Depp’s penis.”

The bodyguard admitted that yes, he still worked for Johnny to this day, and that he considers himself a “loyal” employee.

What do YOU think of this testimony, Perezcious paralegals??