The 62-year-old comedienne uses her late mother Maggie Griffin’s page to return to the blue bird platform and urges the new owner and CEO to ‘free’ her account.

AceShowbiz –Kathy Griffin is defying Twitter suspension. The comedienne/actress has stood up for herself after being banned from the blue bird platform for impersonating its new owner and CEO Elon Musk.

The 62-year-old star was banned from the app on Sunday, November 6 after changing her display name to “Elon Musk,” violating the terms of service of impersonating someone. A few hours later, however, she found a way to return to the digital platform by using her deceased mother’s account. “#FreeKathy,” she first tweeted under Maggie Griffin’s page which hadn’t been active since 2019.

In a follow-up tweet, Kathy replied to Elon after he said, “Going forward, any Twitter handles engaging in impersonation without clearly specifying ‘parody’ will be permanently suspended.” She posted, “I’m back from the grave to say… #FreeKathy #TipIt.” 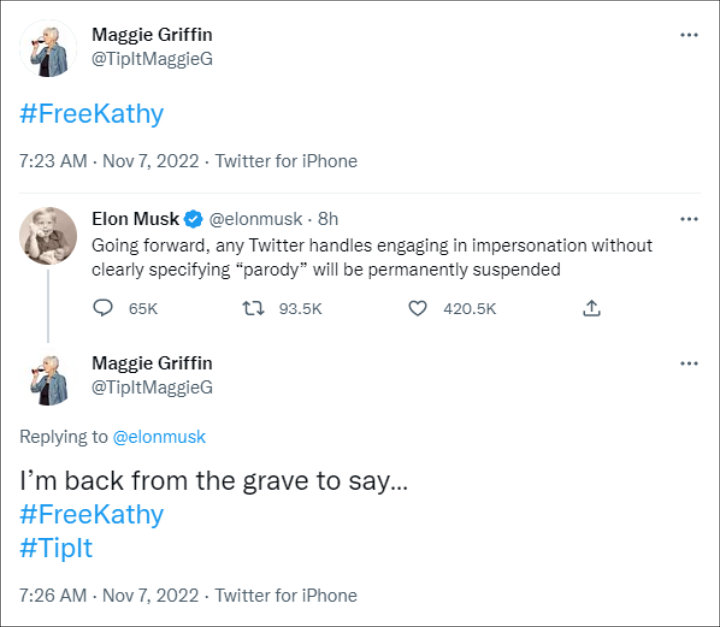 Kathy Griffin tweeted using her late mom’s account after she was banned for impersonating Elon Musk.

Kathy would clarify that she was using her mom’s account as “she would not mind.” The “Kathy Griffin: My Life on the D-List” alum noted, “Apologize in advance for all the comments you’re gonna have to read about how ugly I am and they’re probably gonna throw you in there too. Oh by the way this is KG. I’m tweeting from my dead mother’s account.”

A Twitter user pointed out that Kathy had been suspended for impersonating Elon and was now doing the same with her mother’s account. “Oh, for gods sake Andy, look at the date on the tweet you are referencing. It is from 2019. My wonderful mother had an account that I ran for her. She passed away, but I always kept the account. Trust me, she would be with me on this. Relax,” Kathy replied.

Elon then tried to crack a joke about Kathy’s suspension tweeting, “Actually, she was suspended for impersonating a comedian,” to which Kathy wrote back, “I mean… you stole that joke, you a**hole. People have been posting that joke for hours, you hack. Look, please do a better job running this company. It used to mean something. This is KG btw.” The SpaceX and Tesla Motors CEO then said that if Kathy wanted her account back she would have to pay $8. 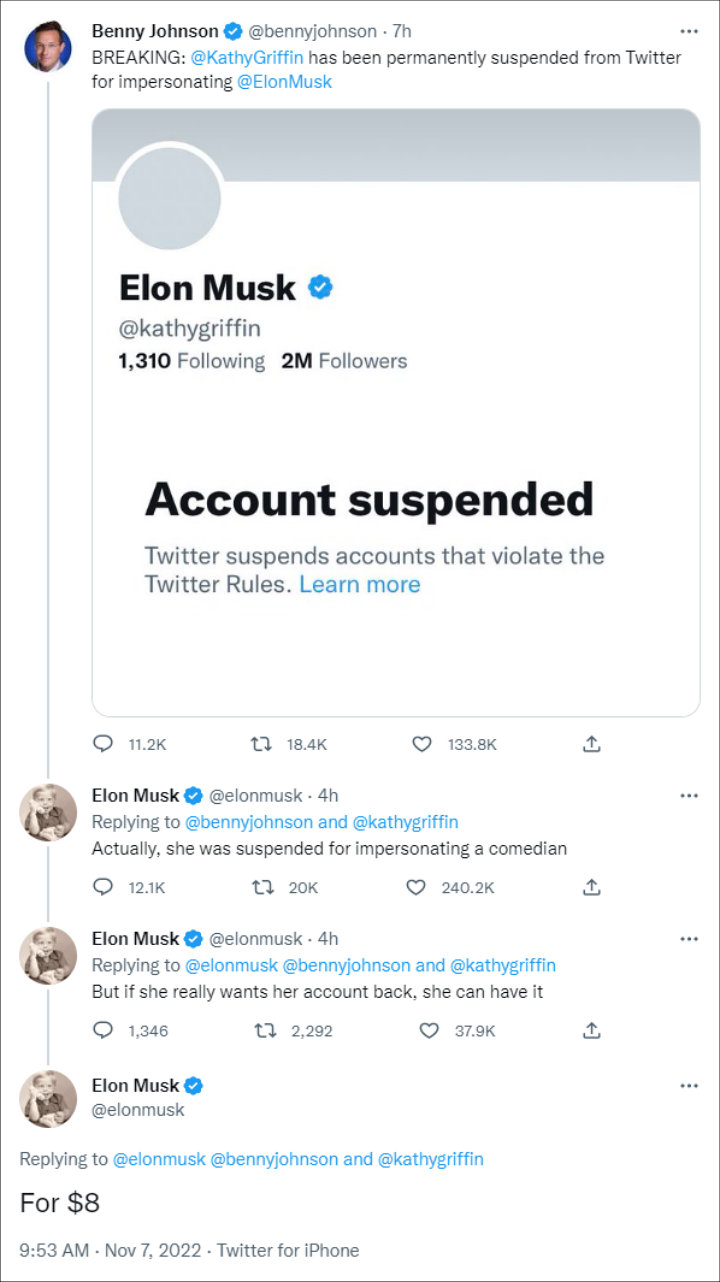 Elon Musk said Kathy Griffin should pay $8 to get her account back.

Elon officially became the owner and CEO of Twitter, Inc. on October 27 after finalizing deal worth of $44 billion. Shortly after the acquisition, the world’s richest man announced that he’ll charge $8 a month for verified users who have blue tick and fire 50% employees as “the company is losing over $4M/day.”