Katie Holmes shared a series of throwback photos and wrote a sweet message in honor of her daughter, Suri Cruise’s, 15th birthday.

Suri Cruise turned 15 years old on April 18, and her mom, Katie Holmes, took to Instagram to share some love for her only daughter. “Happy 15th birthday Sweetheart!” she wrote. “I love you!!!!!!! I can’t believe you’re already 15!” Katie also posted a series of emojis — two hearts and a kissing face. Additionally, she shared a gallery of photos of Suri from over the years, including two shots of herself hugging her daughter.

Katie shares Suri with her ex-husband, Tom Cruise. The two got engaged after less than two months of dating in 2005, and Suri was born in April 2006. In November of that year, Katie and Tom tied the knot, although they split six years later in June 2012. In the divorce settlement, which was reached in a matter of 10 days, Katie got custody of Suri.

The mother/daughter duo live in New York City together and have an extremely close bond. They’re often spotted out shopping, dining or hanging with Suri’s friends in the Big Apple. Meanwhile, Tom has not been publicly seen with Suri since 2013, and the extent of their relationship is elusive to the public. 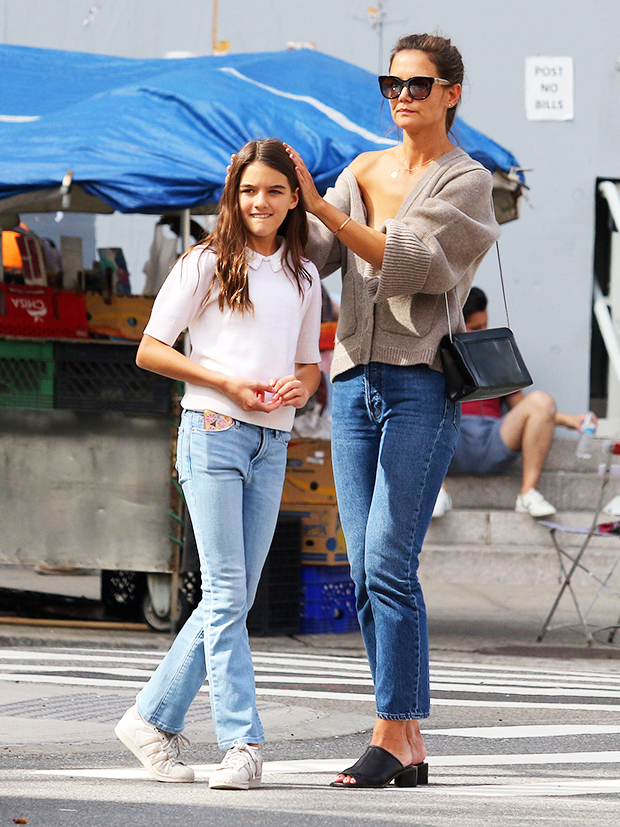 Because of her famous parents, Suri has grown up in the public eye, but she’s managed to live a fairly normal life for a child in the spotlight. Of course, she has her mom to thank for that. “It’s been nice that our ages fit,” Katie gushed, regarding her relationship with Suri, in a 2019 interview. “How do I put this? Every age that my child has been and my age at that time has been a good match. We kind of grew up together.”

Katie was 27 years old when she gave birth to Suri. At the time, Tom already had two adopted kids — Connor Cruise and Isabella Cruise — from his marriage to Nicole Kidman. Like Tom, Connor and Isabella continue to practice Scientology, while Katie, Suri and Nicole do not.