Keanu Reeves turned 57 on Thursday and is still having a moment — but fans have loved him for decades.

The actor became a trending topic in June 2019 when fans noticed the respect he gives to women asking for photos with him. One Twitter user called him a “respectful king” for giving women their personal space, but that’s not the only reason he continues to make headlines.

Following the massive success of John Wick: Chapter 3 — Parabellum in May 2019, a fourth film to be released next year, he also lent his voice to Toy Story 4 and put out another Bill & Ted movie. He drove video game fans wild with the announcement that he’d be in the Cyberpunk 2077 game, and he became a Netflix sensation when he wasn’t afraid to make fun of himself with his cameo appearance alongside Ali Wong and Randall Park in Always Be My Maybe.

“He was totally game,” Wong told ET of Reeves’ cameo in the film — noting he was her first choice to play her famous boyfriend. “I think he had a lot of fun doing it, and I sat in front of him during the premiere and that was the first time he had ever seen the movie, and he was just laughing the whole time. It was really, really sweet to hear. It was delightful.”

Reeves also has a celebrity fan in Chris Evans — who hilariously praised behind-the-scenes footage of the actor working on Toy Story 4. “If they just released two hours of this and called it Toy Story 4, I’d probably still see it at least twice in the theaters,” he tweeted.

If they just released 2 hours of this and called it Toy Story 4, I’d probably still see it at least twice in the theaters. https://t.co/5vCNWB090l

Fans always anticipate when Reeves hits the talk show circuit to promote a new project. He couldn’t have been more endearing during his appearance on The Ellen DeGeneres Show in May 2019 when he revealed he had a crush on his Speed co-star, Sandra Bullock. The actress confessed her own crush on him to DeGeneres during her appearance in December 2018.

“She obviously didn’t know I had a crush on her either,” Reeves said, explaining that he and Bullock never dated because they were “working.”

“It was nice to go to work,” he shared. “She’s a wonderful person.”

Reeves also left Stephen Colbert stunned that same month during an appearance on The Late Show when answering a profound question about what happens when we die. “I know that the ones who love us will miss us,” he said.

The actor has overcome multiple tragedies throughout his life. His best friend, River Phoenix, died of a drug overdose in 1993, when he was just 23 years old. In 1999, his girlfriend, Jennifer Syme, gave birth to her and Reeves’ daughter, Ava, who was stillborn. Syme died in a car crash two years later in 2001.

Through it all, Reeves has remained a symbol of hope for fans — and consistently praised for his actions off-screen. In 2017, a video of him giving up his subway seat to a woman in New York City went viral.

In March 2019, while aboard a flight from San Francisco to Los Angeles, he assisted his fellow passengers when the flight experienced an issue and was forced to land in Bakersfield — which is over 100 miles from L.A. In a social media clip from the airport, Reeves was shown explaining to his fellow passengers that it was going to be three hours before baggage handlers would help unload their plane but that a van could be there in an hour to take them to L.A.

Reeves later made the ride extra special by sharing some fun facts about the desert town, as well as playing some music on his phone by local artists. Brian Rea, an artist, was one of the passengers on the adventure with the movie star and along the way, he documented the fun, adding that Reeves was a “generous person.”

That time when your flight out from #GDC almost crashes and you have to emergency land in a remote airport but at least Keanu Reeves is having as bad a day as you are. pic.twitter.com/XSPa1wlNuO

Bullock has talked numerous times about Reeves being a gentleman while they filmed their now iconic 1994 movie, Speed. During her 2018 appearance on The Ellen DeGeneres Show, she recalled filming action scenes with him.

“My dress sort of kept flying up and I said, ‘Whatever you do, just keep my dress down,'” she recalled about doing the film’s stunts. “The whole stunt he just made sure my dress [stayed down]. It was very sweet.”

“I think about how sweet Keanu Reeves was, and how handsome he was,” she continued. “It was hard. It was really hard for me to really be serious. He’d look at me and I’d [giggle].”

In June 2020, Winona Ryder revealed that Reeves refused direction to yell at her on the set of Francis Ford Coppola’s 1992 film, Bram Stoker’s Dracula. In an interview with The Sunday Times, Ryder was asked about a story about Coppola allegedly shouting at her, “You whore! You whore!” in an effort to bring her to tears.

“To put it in context I’m supposed to be crying,” Ryder recalled. “Literally, Richard E. Grant, Anthony Hopkins, Keanu [Reeves]… Francis was trying to get all of them to yell things that would make me cry. But Keanu wouldn’t, Anthony wouldn’t … the more it happened, I was like [she crosses her arms like a sulky teenager and frowns] … It just didn’t work. I was, like, really? It kind of did the opposite.”

“I love Keanu,” she continued. “We’re great friends. I miss him so much, and it’s hard because he’s not far, just over there.”

Ryder also told ET in August 2018 about meeting Reeves in the late ’80s, “I had a pretty big healthy crush on him.”

Reeves’ kindness and generosity is not just extended to his famous co-stars, but to those who work with him behind the scenes. In a 2003 interview with the Seattle Post-Intelligencer, he was asked about gifting 12 stuntmen who worked with him in the memorable The Matrix Reloaded fight scene each with their own Harley-Davidson motorcycle.

“We were all in this thing, and we were training together beforehand,” Reeves said. “I just wanted … to give a bigger thank-you to all these guys who helped me make this, I think, one of the great movie fights in the history of cinema.”

In June 2020, Reeves’ John Wick stunt driver, Jeremy Fry, gushed about his on-set attitude in an interview with Metro.

“He is a giver, he is selfless, he works tirelessly,” he said. “Every good thing you’ve heard about him is 110 percent true.”

Fry later told a heartwarming story about him and Reeves bonding over their love of motorcycles, and the actor inviting him to an all-expenses paid weekend trip at an exclusive racetrack.

“He goes, ‘Hey, how would you like to go to Laguna Seca?’ and when Keanu Reeves asks you if you wanna go pretty much anywhere, you say yes,'” he shared. “Turns out he had rented Laguna Seca, which is a very well-known popular racetrack in California, and he rented it for two days, private rental, there were about 80 of his friends and people he knew. There were celebrities there, people from different industries there, a huge cross-section of people. He put us up in local hotels, he catered breakfast, lunch, dinners.”

Fry even got to introduce Reeves to his brother.

“That was a very special time for me for many different reasons,” he shared.

Also in 2020, Reeves auctioned off a private Zoom date for charity, offering a 15-minute Zoom call to the highest bidder to benefit Camp Rainbow Gold, a service which provides “emotionally empowering experiences to Idaho’s children diagnosed with cancer and their families.” Reeves has reportedly been quietly donating to cancer charities in honor of one of his sisters who battled leukemia.

Clearly, Reeves is more popular with fans than ever. In June 2019, one fan launched a Change.org petition to give the actor the Time‘s Person of the Year title. Though he didn’t get the title — which went to Greta Thunberg — the petition has been signed over 174,000 times.

“Keanu is the most wholesome person alive, make him the person of the year!” the petition reads. “Keanu has secretly donated millions of his earnings to children’s hospitals and other charities, and has done amazing things for people in public while ask for nothing in return.”

As for his personal life, Reeves went public with his girlfriend, 48-year-old artist Alexandra Grant, in November 2019, when they held hands on the red carpet at the LACMA Art + Film Gala in Los Angeles. Fans once again praised the actor for his relationship. 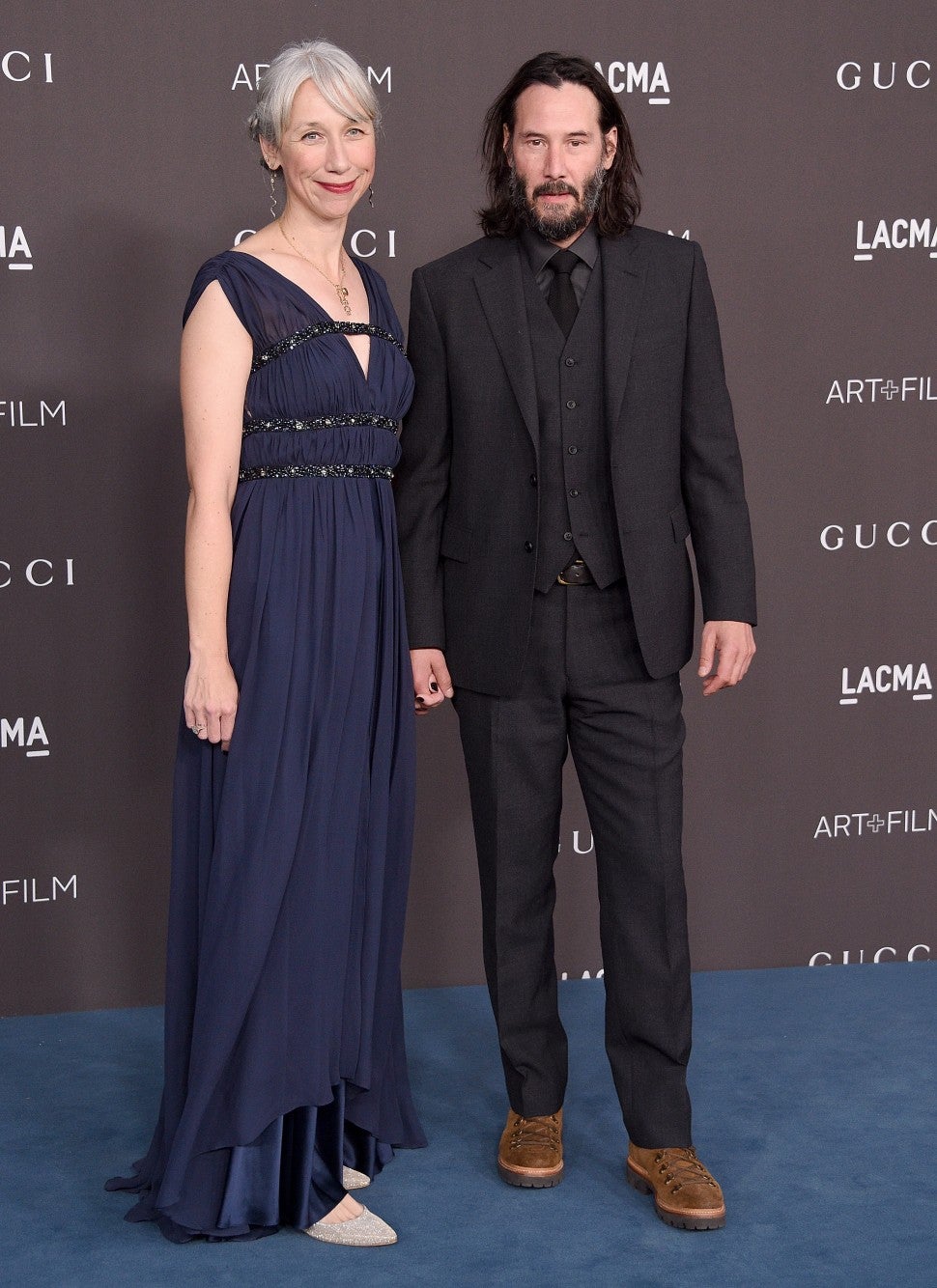 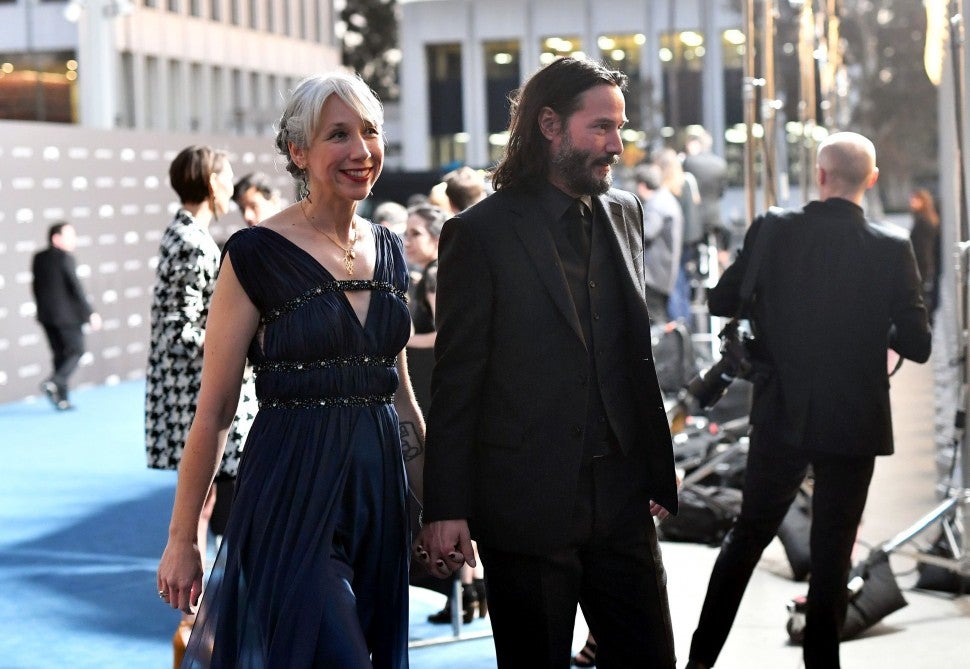 “Keanu and his age-appropriate girlfriend look so cutely and refreshingly normal,” another comment read.

Others simply expressed joy for the happy update in Reeves’ life. As one Twitter user wrote, “Keanu Reeves’ happiness is the only thing everyone can agree upon.”

“Keanu Reeves continues to dunk on the rest of the male species and I’m honestly stoked about it,” another person wrote.

ET spoke with Reeves at the Los Angeles premiere of Toy Story 4 in June 2019, when he commented on the internet’s thirst for him and was as humble as ever.

“It’s been really nice and special for me,” he acknowledged. “Just how well the John Wick film was received and then also recently with Always Be My Maybe and then being connected with CD Projekt Red. I’ve just had the chance to be working with really cool people and be a part of really cool projects.”