Like any seasoned influencer, Kendall Jenner has been exhaustively documenting her Hawaii vacation. And like any Kardashian-Jenner, the model has simultaneously sparked her own dating rumor buzz—perhaps to take a little attention away from older sister Khloé Kardashian, following her and her ex Tristan Thompson’s surprise second baby news.

In a carousel of vacation photos and videos she posted yesterday, Jenner shared a clip of her stepping out of the ocean with her maybe-ex-boyfriend Devin Booker following behind her, Page Six pointed out. This isn’t the first time the former couple has been spotted hanging out since news of their breakup broke last month. The two were also seen together at Malibu’s Soho house and at a Hamptons liquor store. 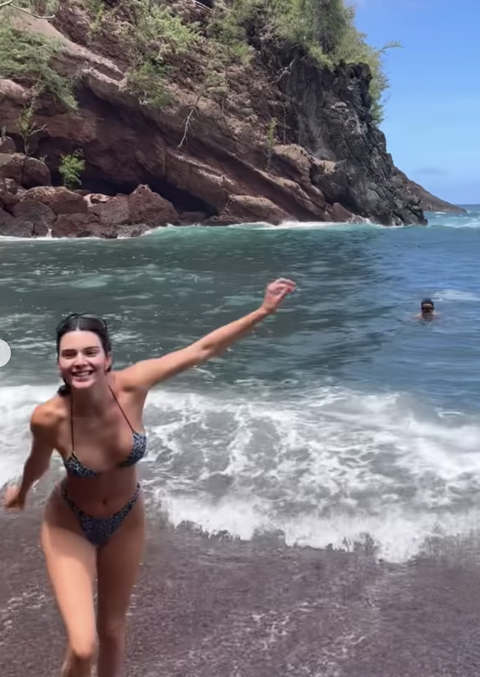 Jenner also shared multiple bikini selfies, including one of her in a pink floral two-piece and another of her in a classic black one.

There’s a real chance Booker and Jenner could properly reconcile if they haven’t already. When news broke of their breakup, sources told multiple outlets that it may not be a permanent split.

A source told E! that in June, Jenner told Booker she “wanted space and time apart. They have been in touch since and do care about one another.” That source added that the two do want to get back together: “They both hope to make it work, but as of now, they are split.”

A source additionally told Us Weekly at the time that Jenner and Booker want to “figure out if a future together is what’s meant to be. [They’re] tak[ing] this time to focus on themselves.”

“Kourtney’s wedding really put things into perspective,” the source added. The former couple attended the ceremony together in one of their most public dates ever. During their break, Jenner and Booker remain on good terms, clearly, and are “still super amicable and supportive of each other.”

Page Six‘s source said on June 24 that the two were technically on a break. “While they care for each other, Devin was not going to propose marriage, and his priority is his career,” the insider said. “Kendall’s career also dominates her life. After two years they had the ‘Where is this going?’ talk. And since they were not moving forward, it was time to take a break, probably permanently.”