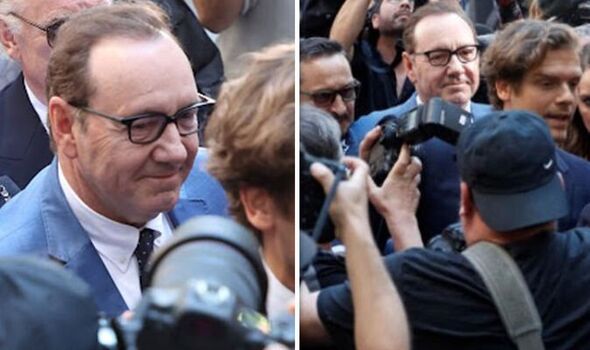 Hollywood star Kevin Spacey managed to smile as he arrived at Westminster Magistrates’ Court, amid a crowd of cameras and reporters. The award-winning actor is facing four counts of sexual assault against three men.

Kevin, 62, has also been accused of causing a person to engage in penetrative sexual activity without consent.

The American Beauty star’s charges came after a review by the Crown Prosecution Service of the evidence gathered by the Met Police in its investigation.

He arrived in Westminster this morning dressed in a light blue suit and glasses.

The Oscar-winning actor has been charged with two counts of sexual assault on a man, who is now in his 40s, over an incident which allegedly took place in March 2005 in London.

He has also been charged with sexual assault on a man, now in his 30s, which took place in April 2013 in Gloucestershire, according to allegations.

In addition, Kevin has been charged with sexual assault on a man who is now in his 30s, from August 2008 in London.

He has also been charged with a separate count of causing a person to engage in penetrative sexual activity without consent on the same man.