The Good American founder steps out in a silver chainmail mini dress when attending the 2021 People’s Choice Awards in support of her sister Kim Kardashian.

The “Keeping Up with the Kardashians” alum literally glowed that night as she left little to the imagination in a silver chainmail mini dress that she paired with transparent heels. She wore her blonde tresses down in loose waves and donned minimal accessories to let her see-through outfit shine.

Khloe was on hand at the fan-voted awards show to support her sister Kim Kardashian, who was honored with the Fashion Icon Award. The SKIMS founder herself remains consistent with her theme this season, opting for an all-black Balenciaga ensemble complete with black gloves. The mother of four accessorized with oversized sunglasses and large dangle earrings.

Khloe later joined Kim and Kris Jenner on the stage to accept a trophy for Reality Show of 2021 for their recently concluded family show. “Thank you guys so much. This is a bittersweet moment for us because you guys have voted for us on our last season of ‘Keeping Up with the Kardashians’,” Kim said during the family’s acceptance speech. “It’s been an incredible 14-year ride and all of the memories we had can never be replaced.” She continued, “We started with the idea of bringing our crazy family into your homes and we could not have imagined that it would have lasted this long.”

Khloe then added, “We to thank everyone who has supported us old and new. We see you, we read the comments, we see the social posts and it’s awesome. A big shout-out to all of our fan accounts, you all never miss a beat.” 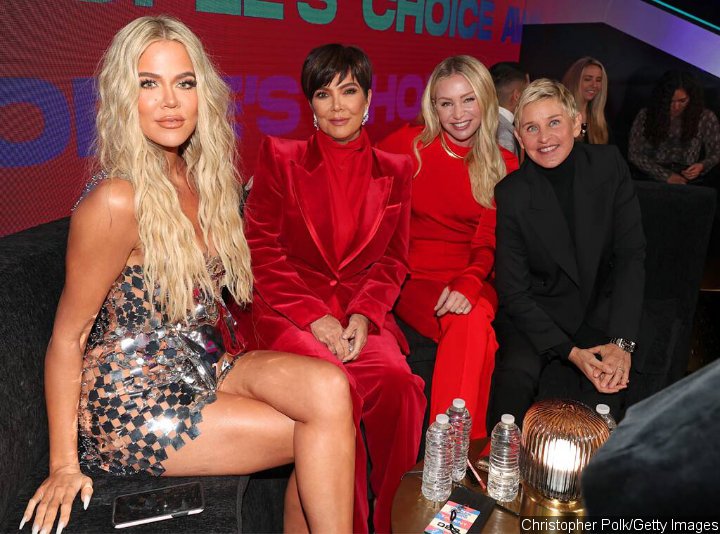 Khloe Kardashian mingled with other celebrity guests at the 2021 People’s Choice Awards.

Khloe’s outing on Tuesday night marks her first official public appearance since news broke that her baby daddy Tristan is sued by Maralee Nichols for child support. The personal trainer from Texas claimed she conceived her baby with him in March, during the basketball star’s 30th birthday party. She reportedly gave birth last week.

The Sacramento Kings player recently requested an emergency gag order to ban his alleged baby mama from speaking out to the press. He accused Maralee of violating a confidentiality order verbally granted by a judge after she filed a paternity lawsuit against him. He claimed she had been doing interviews with the media and spreading lies about him and his family on social media.

According to the NBA star, Maralee leaked personal information and shared fabricated Snapchat messages, which she claimed were sent to her by him. He accused her of defaming him “to achieve some sort of notoriety and gain for herself in this lawsuit.”

This came after Maralee spilled the tea about the Kardashian family, claiming that Kylie Jenner allegedly slept with Drake last year and Tristan knew it. She also blasted the Canadian athlete for only responding to her after she threatened to expose the famous clan.