Kylie Jenner Fans Call Out Brother Brandon's 'Sicko' Comment On Her Nipple Photo – What Do YOU Think??

We’re still hot and bothered by Kylie Jenner‘s most recent sexy snaps… but is her older brother, too?!

On Tuesday morning, we reported on the Kylie Cosmetics mogul’s new set of Instagram selfies showing off Jean-Paul Gaultier‘s “Naked Bikini” top with nipples pictured graphically on the front. And while the 24-year-old reality TV star opted to “free the nipple” in a bit of a tongue-in-cheek way with the sultry snaps posted to IG, her big bro Brandon Jenner apparently felt the need to insert himself into the convo, too!

The 41-year-old’s reaction was noticeable even among the thousands and thousands of other fan comments on Kylie’s initial IG post. The musician typed a simple two-character take on Kylie’s (non) nip slip, sharing a laughing emoji and a praise hands emoji while showering the star with positivity.

As you can see (below), Brandon joined KarJenner-adjacent public figures like Kylie pal Victoria Villarroel and longtime Khloé Kardashian BFF Malika Haqq in reacting warmly to the star’s snaps: 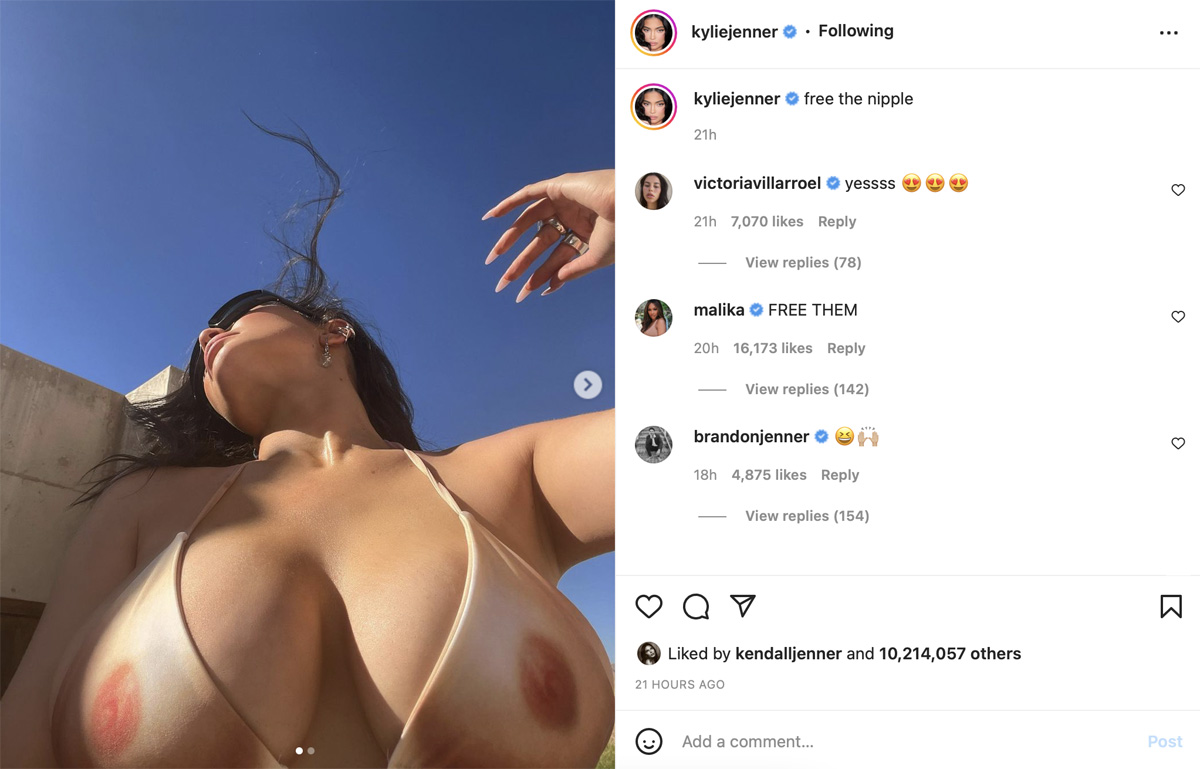 But Brandon’s helpful comment didn’t sit so well with fans!!

Hundreds responded to the elder Jenner family member, slamming him for being “weird” by commenting on Kylie’s bikini body — specifically a closeup of her boobs — at all.

Here are just a few of the dozens and dozens of takes on Brandon’s reaction to Kylie’s upload (below):

“You shouldn’t be here, bro”

“um ur a sicko that’s ur sister”

“man youre her brother”

“I think you could’ve kept your comment to yourself. Pretty weird”

“Bruh if there was any post u should comment on from ur sister, this was not it.”

Are fans being harsh? On the one hand, this is her big bro just supporting her, laughing at her cheeky post. After all, it’s not her real nipples, it’s all for giggles, right? On the other… we can see why there might be an ick factor to the fact he’s looking at all. Being family, should he be looking away in disgust?

What do YOU think, Perezcious readers? Is Brandon being a “weirdo” or is this just some fun brotherly love??