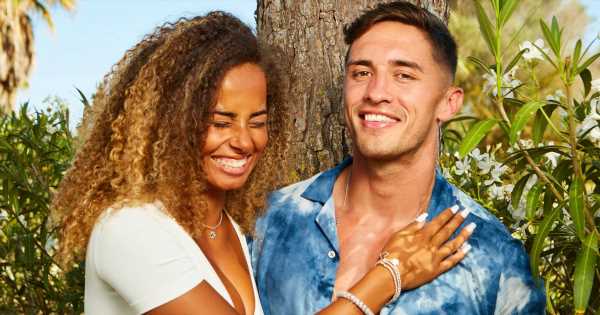 Love Island champion Amber Gill has told how she believes she deserved to win with Greg O'Shea because of the journey Michael Griffiths sent her on.

The pair coupled up in the early weeks but were torn apart during Casa Amor where Michael broke Amber's heart by cheating with Joanna Chimoinides.

Despite an explosive row in their final scenes together, Michael and Joanna have been spotted on the outside – including a very cosy appearance at a London music festival over the weekend.

But since being alerted to the pair's antics, Amber has branded their reconciliation 'weird.'

"Am I surprised by that? To be fair I didn’t see much of their relationship. I don’t really know how they were.

"Michael definitely tried to come back to me so I think it’s a bit weird. I don’t really want to say too much," said Amber.

The Geordie lass also said that she doesn't believe she would have won the public vote in Monday's live final if she'd have gone back to Michael, as the firefighter wanted her to.

"If I'd gone for Michael it would have been she’s gone back to the guy who didn’t treat her well," explained Amber.

"Me and Greg were a good match and he came in when I needed a gent and I feel like that's why it went for us," she added.

"I don’t think Michael will be kicking himself. I think he was happy for me either way. I think everything happens for a reason. We’ll have to see what his reason is," she told the Mirror.

Amber's dumped co-stars Joanna and Michael set tongues wagging when they were spotted looking cosy at a Kisstory even in London on Saturday.

Despite Joanna vowing she'd never go back there in pictures taken of the two it appeared as though she was enjoying a romantic embrace from Michael.

However, since the snaps emerged, Joanna has denied any passion between them.

She hit out on social media: "I just want to make a point, we weren't kissing,

"He was saying something in my ear and I found it funny. I can't remember what it was," she told her followers.

But many fans raised eyebrows at Joanna's claims after seeing the pics.

END_OF_DOCUMENT_TOKEN_TO_BE_REPLACED

END_OF_DOCUMENT_TOKEN_TO_BE_REPLACED
We and our partners use cookies on this site to improve our service, perform analytics, personalize advertising, measure advertising performance, and remember website preferences.Ok