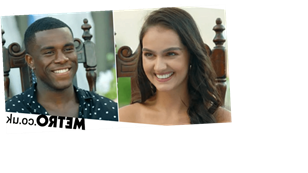 Luke Trotman revealed he had sex with Siannise Fudge at the first opportunity after leaving the Love Island villa.

The couple were beaten by Paige Turley and Finley Tapp at the final hurdle, but they haven’t let that put a downer on their romance.

And, giving us a throwback to the boys’ subtle sex code in the villa, Luke T lifted the lid on their breakfast habits.

‘[The] first thing we did after leaving the villa, was had a full English breakfast,’ the 22-year-old said.

Siannise, 25, also lifted the lid on their evening of passion, insisting that she had ‘no complaints’ on her boyfriend’s ‘cooking’.

‘It was really lush, wasn’t it? No complaints here,’ she added to Closer.

The lovebirds recently returned to the UK, following their dating show adventure in South Africa – with the beauty consultant clutching on to her crown as they cosied up to one another at the airport.

And, speaking after the final, Siannise admitted that she never thought she’d get as far as she did.

‘I never thought – especially considering my journey at the beginning – that I’d make it two weeks, let alone to the final,’ she said.

‘We are grateful to have made it that far and to have had all the support we’ve had.’

Well, they had a lot more support than they may have realised, with 48% of readers suggesting they should have taken the crown.

Heaping praise on winners Paige and Finn, she added: ‘They fully deserved it.’

END_OF_DOCUMENT_TOKEN_TO_BE_REPLACED

END_OF_DOCUMENT_TOKEN_TO_BE_REPLACED
We and our partners use cookies on this site to improve our service, perform analytics, personalize advertising, measure advertising performance, and remember website preferences.Ok