Love Island star Theo Campbell has lost all sight in his right eye after being struck in the face by champagne cork while holidaying in Ibiza.

Campbell was immediately rushed to hospital following the incident, undergoing two separate operations to salvage the eye – which ‘split in half’ after being hit with the cork.

Taking to Instagram on Tuesday, the former reality star broke the news to followers while sharing a snap of himself recovering in hospital with girlfriend Kaz Crossley. 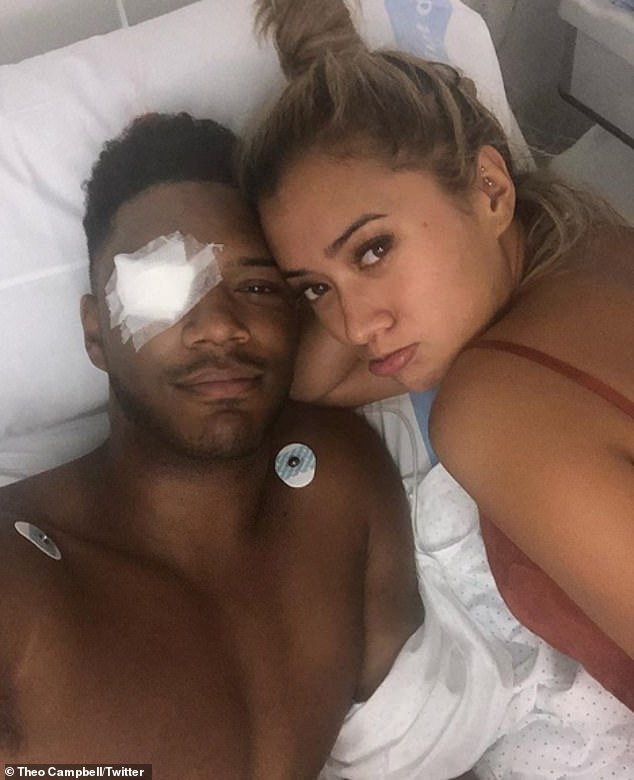 Horrifying: Love Island star Theo Campbell has lost all sight in his right eye after being struck in the face by champagne cork while holidaying in Ibiza.

Revealing a heavily bandaged right eye, he wrote: ‘Thanks for all the messages and support I’ve got over the last couple days they’re all very much appreciated!

‘So yeah basically 2 eye surgeries later after a really unfortunate accident, I’ve lost all vision in my right eye as it got split in half, who would have thought a champagne cork would be the end of me. But I still have 1 eye left, looking at the bright side of things.’

Theo also thanked girlfriend Kaz, a Love Island contestant in 2018, for travelling to Ibiza immediately after discovering he was in hospital. 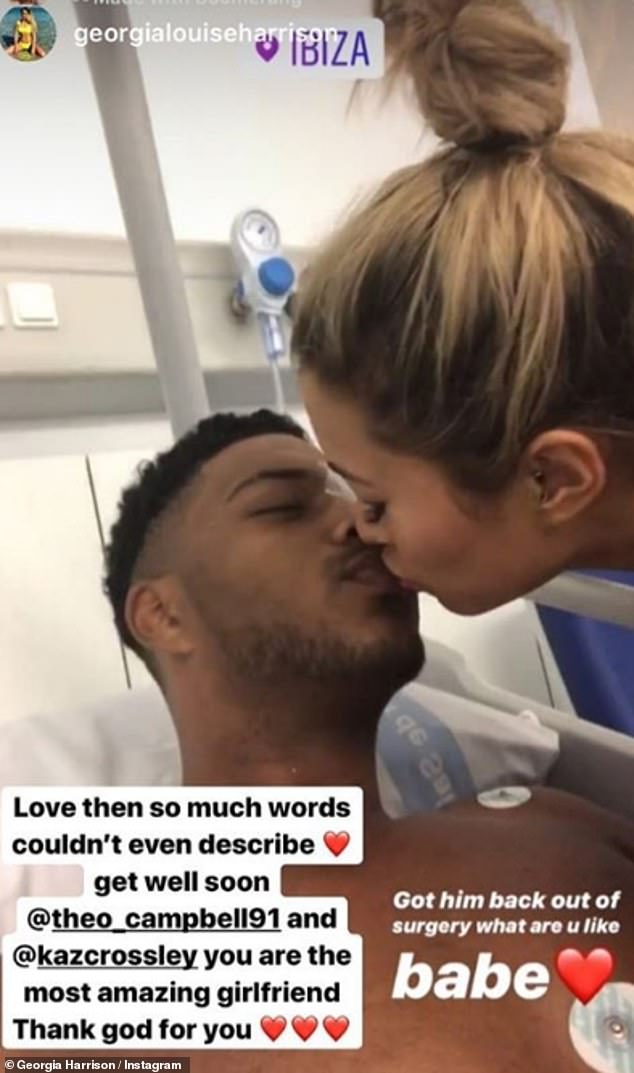 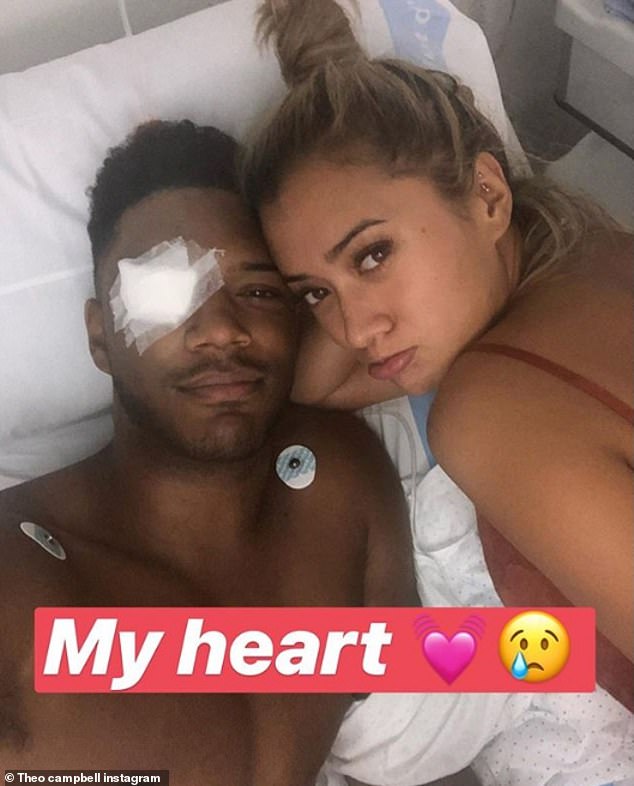 Painful: Campbell was immediately rushed to hospital following the incident, undergoing two separate operations to salvage the eye – which ‘split in half’ after being hit with the cork

He added: ‘Thanks for flying out to look after me as well babe… if anyone knows where sells cool eye patches let me know.’

Kaz later shared a short video  of herself planting a kiss on her stricken boyfriend as he came round following his second operation.

Adding a short caption, she wrote: ‘Got him back out of surgery… what are u like babe.’ 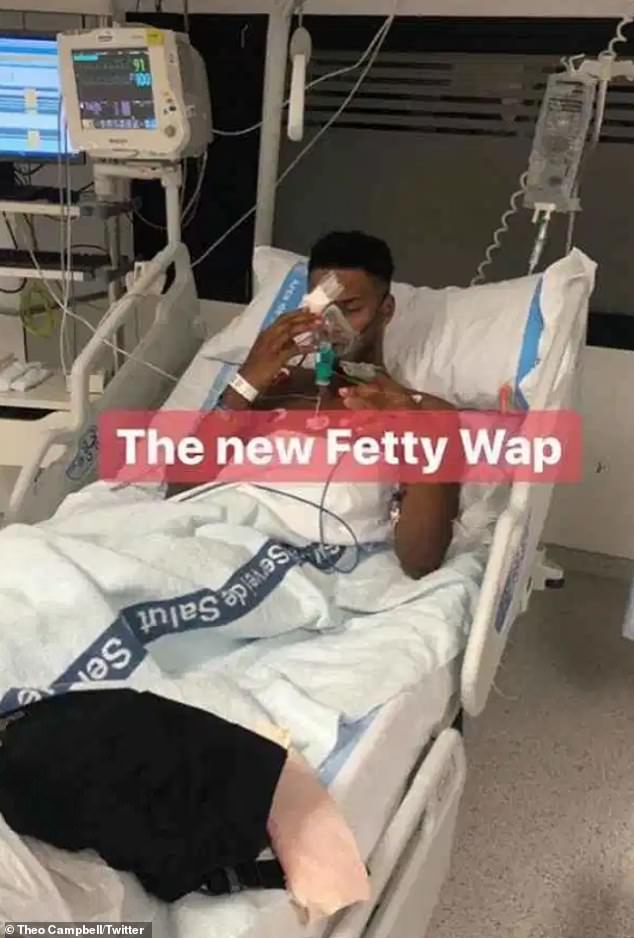 Making the best of it: Despite being blind in one eye, Theo still found time to crack a joke as he recovered with an oxygen mask over his face 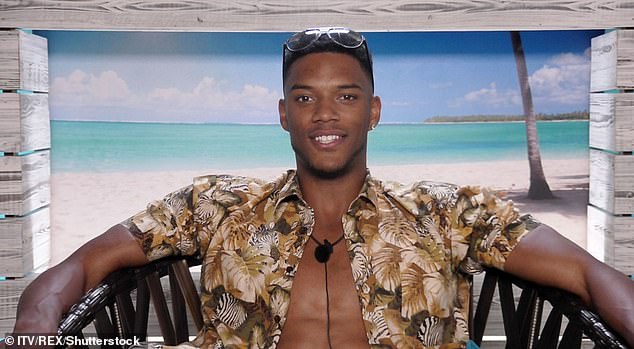 Old times: Theo appeared on the third series of Love Island in 2017

Former TOWIE star Georgia Harrison also sent her best wishes to Theo, with whom she featured on the third series of Love Island in 2017.

Taking to her own Instagram account, she wrote: ‘Love them so much words couldn’t even describe… get well soon @theo_campbell91 and @kazcrossley you are the most amazing girlfriend. Thank god for you.’

Making light of the situation, Theo found time to joke about his predicament by calling himself ‘the new Fetty Wap’ – a reference to the one-eyed American rapper –  after posting a snap of himself breathing through an oxygen mask. 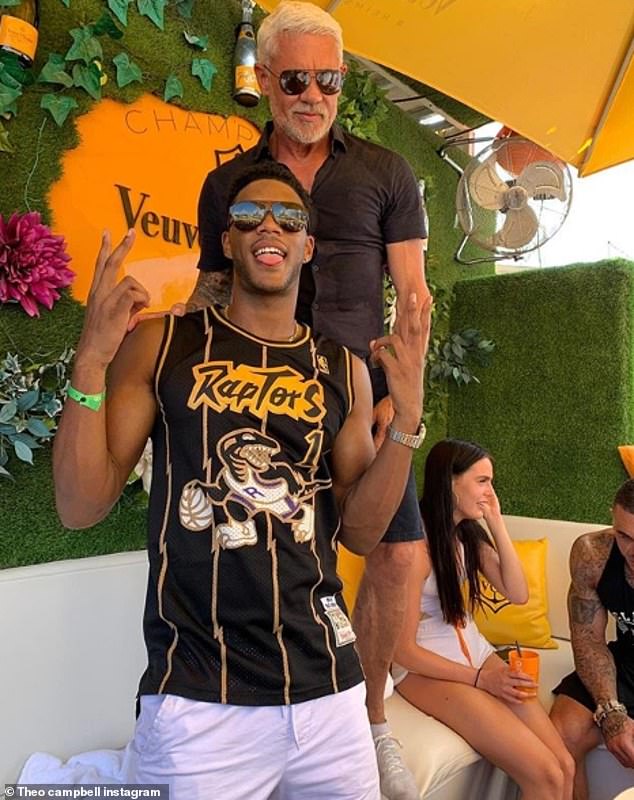 Good times: Theo had been partying with pals, among them Match Of The Day host Gary Lineker’s brother Wayne, at popular poolside resort O Beach Ibiza shortly before his freak accident

Theo had been enjoying a raucous lads’ holiday prior to the accident, with Instagram posts showing him partying with Match of the Day host Gary Lineker’s brother Wayne at his popular poolside resort, O Beach Ibiza.

Just two days before posting from his hospital bed, Theo was pictured letting his hair down with Wayne, who owns a string of businesses on the island.

Bath based athlete Theo made a late appearance on third series of Love island, arriving on day 32 before coupling up with fellow contestant Tyla Carr.

But appearance in the villa was short lived, with the reality  star lasting nine days before leaving in eighth place. 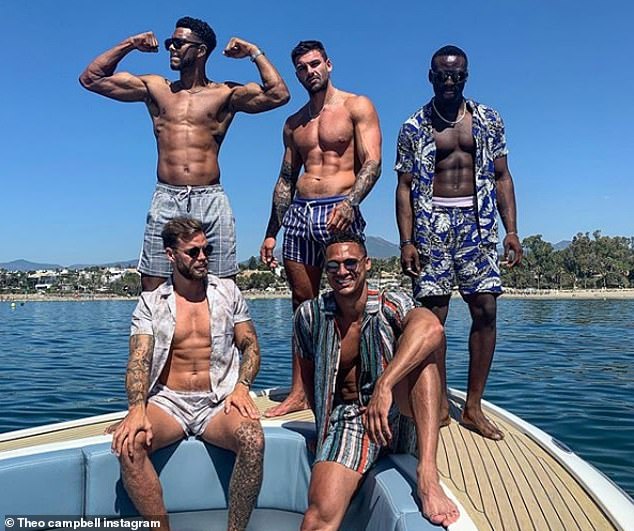 Lads: Less than a week ago Theo posted this shot from Marbella, where he was joined by a handful of former Love Island stars