The pop star’s mom called for the removal of her ex-husband Jamie from Britney’s conservatorship, saying the arrangement is ‘exhausting and terrifying.’

Lynne Spears is supporting daughter Britney’s desire to have her estranged dad Jamie replaced as her conservator. On July 26, the singer’s new lawyer Mathew Rosengart filed court documents in Los Angeles Superior Court requesting that Jamie be replaced by Jason Rubin, a certified public accountant. And, in a sworn, written declaration, Lynne argued that the step is necessary because the relationship between father and daughter has “dwindled to nothing but fear and hatred” since the conservatorship was enacted in 2008. 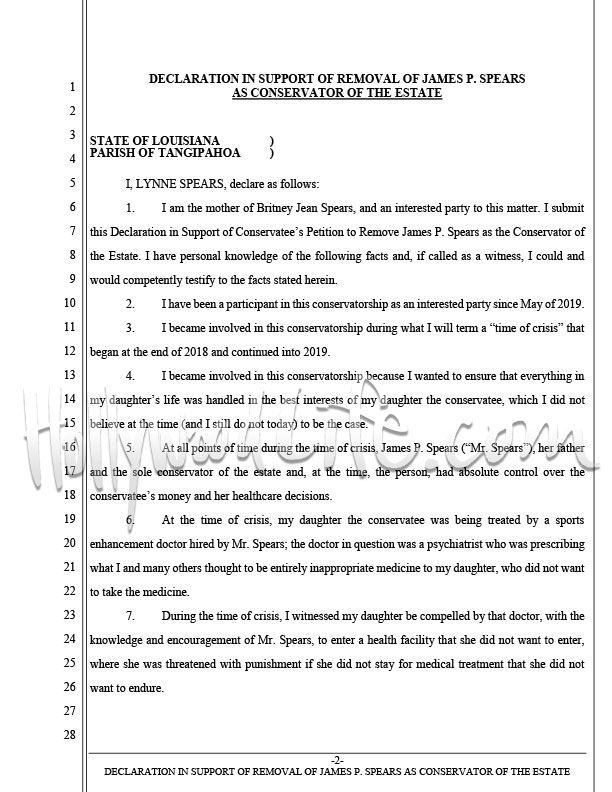 In the documents obtained by HollywoodLife, Lynne, 66, said those feelings stemmed from Jamie’s alleged “complete control over” Britney. She specifically blamed what she described as being her ex-husband’s “mistrust” of his 39-year-old daughter, including his alleged “coercion of her, his ‘bartering’ with her over what she can and cannot do for whatever reward or punishment he is willing to mete out, his constant threats, and his decision-making over all aspects of her life.” The matriarch added that she became a participant of the conservatorship in May 2019 during a “time of crisis” because she wanted to “ensure that everything in my daughter’s life was handled in the best interests of my daughter the conservatee, which I did not believe at the time (and I still do not today) to be the case.”

Lynne then detailed the “microscopic control” that she claims Jamie has over Britney, including hiring a psychiatrist who prescribed medicine that she “and many others thought to be entirely inappropriate medicine” for the singer, “who did not want to take the medicine.” (During her June 23 court testimony, Britney alleged she was forced to take lithium, telling the judge: “He took me off my normal meds I’ve been on for five years, and lithium is a very, very strong and completely different medication compared to what I was used to.”) 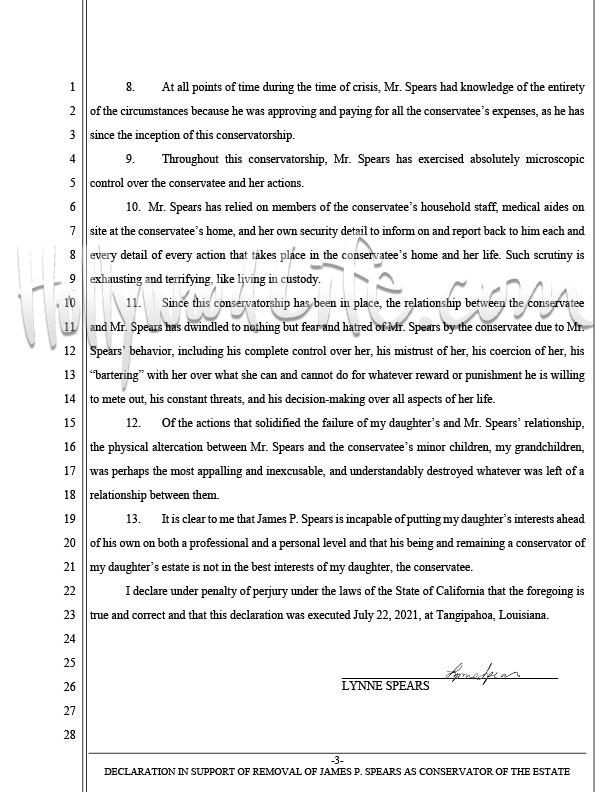 Lynne then referred to a physical altercation that allegedly occurred between Jamie and her grandson Sean Preston, 15. (In September 2019, Britney’s ex-husband Kevin Federline filed a restraining order against Jamie and alleged that the elder Spears grabbed his son, according to an NBC News report.) Lynne said of the incident: “Of the actions that solidified the failure of my daughter’s and Mr. Spears’ relationship, the physical altercation between Mr. Spears and the conservatee’s minor children, my grandchildren, was perhaps the most appalling and inexcusable, and understandably destroyed whatever was left of a relationship between them.”

HollywoodLife has reached out to Jamie’s reps for comment about this allegation in particular and the July 26 court documents as a whole, but we have yet to receive a response.

Calling Jamie’s conservatorship control “exhausting and terrifying” and “like living in custody,” Lynne concluded that Jamie “is incapable” of putting Britney’s “interests ahead of his own on both a professional and a personal level” — and “his being and remaining a conservator” of Britney’s estate “is not in the best interests” of her daughter. Jodi Montgomery, the pop star’s temporary conservator of her person, reiterated this in her own declaration, nothing: “It would be best for Ms. Spears’ well-being and mental health that her father stop acting as her conservator.”

At present, Jamie is the sole conservator of Britney’s financial affairs after the resignation of Bessemer Trust Company earlier in July.