LONDON — Meghan, Duchess of Sussex, has been revealed as guest editor of British Vogue’s September issue, considered the most influential edition of the year for fashion magazines. But she won’t be on the cover.

The Duchess of Sussex was initially invited to oversee the issue by British Vogue’s editor in chief, Edward Enninful, and the two began work in January. The cover, released Sunday evening, features 15 black-and-white photographs of women who are “trailblazing change makers, united by their fearlessness in breaking barriers,” according to a news release from Vogue’s publisher, Condé Nast.

Mr. Enninful has been a vocal proponent of improving diversity and ethics within the fashion industry since his appointment in 2017 as the first black editor of any edition of Vogue.

“To have the country’s most influential beacon of change guest-edit British Vogue at this time has been an honor, a pleasure and a wonderful surprise,” he said, adding that the duchess would be the first guest editor of British Vogue’s September issue since the magazine’s founding in 1916.

The theme of the edition chosen by the duchess and Mr. Enninful — “Forces for Change” — is written in stark orange print across the front cover, which is made up of a mosaic of close-up portraits by the acclaimed fashion photographer Peter Lindbergh. The lineup includes the actress Jane Fonda, the climate change campaigner Greta Thunberg, Prime Minister Jacinda Ardern of New Zealand, the author and activist Sinead Burke and the model Christy Turlington Burns. A 16th panel is mirrored paper, intended to show the reader’s reflection.

In a statement, the Duchess of Sussex said, “These last seven months have been a rewarding process, curating and collaborating with Edward to take the year’s most-read fashion issue and steer its focus to the values, causes and people making an impact in the world today.”

“Through this lens, I hope you’ll feel the strength of the collective in the diverse selection of women and that readers feel as inspired as I do, by the ‘Forces for Change’ they’ll find within these pages,” she added. 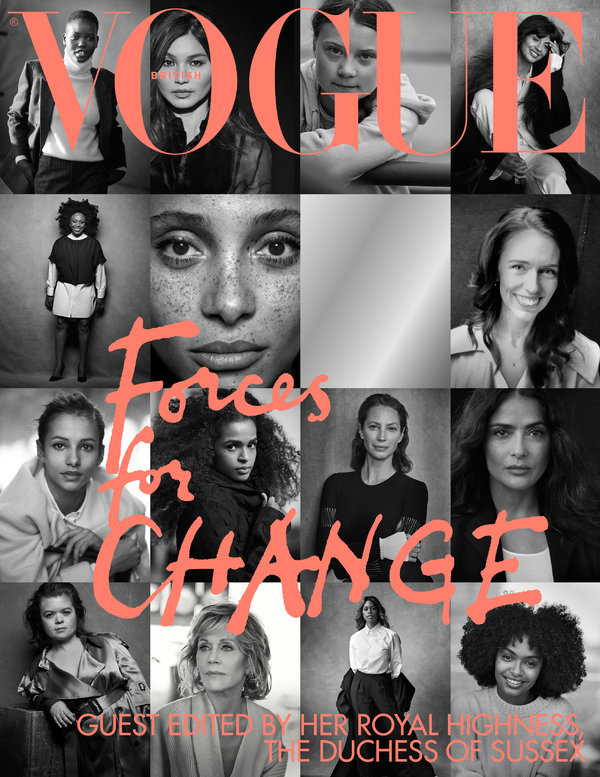 Women of the British royal family have been involved with British Vogue before.

Catherine, the Duchess of Cambridge, posed on the front cover of British Vogue in 2016 for the centenary issue of the magazine under Mr. Enninful’s predecessor, Alexandra Shulman. She wore a relatively casual look, with a fitted white shirt and double-breasted suede coat from Burberry and a forest green fedora from the vintage store Beyond Retro.

That image emphasized the subtle but meticulous attempts to portray her as a more accessible and normal royal since her marriage to Prince William in 2011.

It also contrasted with the look chosen by Diana, Princess of Wales, the mother of Prince William and of Prince Harry, Meghan’s husband, for her Vogue portrait by Patrick Demarchelier in 1990.

Diana, who died in a car accident in Paris in 1997, wore a white ball gown and tiara for her cover shoot.

The Duchess of Sussex has also forged her own path: by not appearing on the cover at all. According to Mr. Enninful, she turned down the opportunity to be photographed for the front.

“From the very beginning, we talked about the cover — whether she would be on it or not,” Mr. Enninful said. “In the end, she felt that it would be in some ways a ‘boastful’ thing to do for this particular project.”

“She wanted, instead, to focus on the women she admires,” he added. “As you will see from her selections throughout this magazine, she is willing to wade into more complex and nuanced areas, whether they concern female empowerment, mental health, race or privilege.”

Inside the magazine, the duchess recounts a candid conversation with Michelle Obama, the former first lady. The edition also features an interview by Prince Harry with the ethnologist and primatologist Jane Goodall. Meghan was an advocate of women’s rights and diversity long before her marriage made her part of the British royal family, so her editorial decisions — celebrating strong women with a range of backgrounds — are a continuation in that vein.

The decision not to appear on the cover is also of a piece with the actions Meghan and Harry have made since their wedding. The couple have a complicated relationship with the British news media — particularly the tabloids — after they took various steps to safeguard their privacy, including declining to release publicly the names of the godparents of their son, Archie.

The Duke and Duchess of Sussex also eschewed the traditional photo opportunity to showcase their baby in favor of choosing carefully curated images online — a decision that did not go down well with some sectors of the British news media.

Nonetheless, Meghan’s position as a former actress and biracial member of the royal family has afforded her immense power to draw attention to the causes she supports, not to mention to the fashion brands she wears and the publications she opts to associate with.

In that light, the decision to guest-edit a print edition of British Vogue will be seen as a boon to Condé Nast, which has — like much of the publishing sector — suffered dwindling magazine sales and reduced budgets in recent years.

The September issues of fashion magazines are traditionally seen as the most important of the year because they carry the most advertising, and cover stars generally have pull within the industry. Last year, British Vogue had Rihanna on its September front, while American Vogue’s cover star was Beyoncé.

Elizabeth Paton is a reporter for the Styles section, covering the fashion and luxury sectors in Europe. Before joining The Times in 2015, she was a reporter at the Financial Times both in London and New York. @LizziePaton