Messy, honest and often nude: is Bella Thorne just what the internet needs? 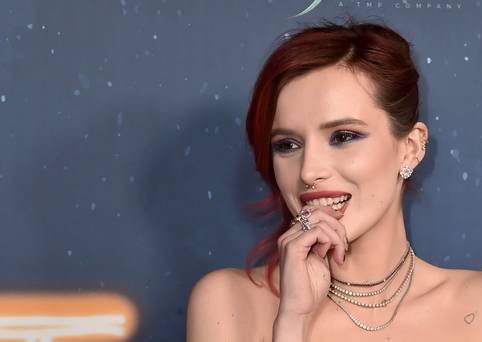 Is there any internet rabbit hole more compelling or affecting than a tumble into the strange and misunderstood world of Bella Thorne?

The 21-year-old is not only at the nexus of a confusing world of YouTubers, Instagram influencers and weirdo celebrity hangers-on (such as Gen-Y superstar Jake Paul or the rapper Mod Sun), but an actress, musician, poet and sometime agony aunt. She is also a pot-smoking, truth-telling and perpetually half-naked role model to some of the wisest and least judgemental children raised by the internet today.

And while to many, she personifies the trope of ‘Disney child star gone off the rails’, Thorne is also one of the most important superstars those outside of social media have never even heard of.

Unless you were a devoted follower of the Disney sitcom Shake It Up, on which she first found child-star fame alongside Spider-Man actress Zendaya, or a viewer of any of the vaguely interchangeable straight-to-Netflix horror movies that she’s appeared in lately, you will not recognise Thorne from her acting work. It’s more likely that you know her from Instagram, where she commands $65,000 per sponsored post, and ranks among the site’s most followed celebrities — or sidebars of shame on various tabloid websites, where she is the latest embodiment of a standard Hollywood trope: that of the cutesy child star who shed her clothes, behaved outrageously and did bad things.

But this is a largely incorrect reading of Thorne’s journey and the position she holds in the Hollywood ecosystem today.

Professionally speaking, Thorne’s trajectory is jarring — in the space of 18 months, she has been the star of a headache-inducing teen TV series no one watched, released a potty-mouthed single titled Bitch I’m Bella Thorne, feuded with Whoopi Goldberg and last week published a book of poetry, illustrations and essays that illuminate her struggles, her continued survival and the sexual abuse she endured as a child.

It is a career and image that is tough to pin down, and reflective of a 21-year-old with few responsibilities, a lot of money and a go-for-broke, directionless-but-whatever quality that most Gen-Zers existing in the days of late-stage capitalism, regardless of their own personal income, will empathise with.

Coupled with her frank honesty about her trauma and the horrors she has encountered in her life so far, Thorne has developed a uniquely empathetic fan base, one that is proud to wave their freak flags and speak openly about their hurt and anxieties.

The more vocal Thorne fans share similar traits. They post selfies defiantly exposing their bad skin and are unafraid to speak publicly about their own hardships, with Thorne the fearless leader, guiding them to some kind of personal salvation. Frequently, they identify as gay or bisexual or somewhere not-entirely-straight on the Kinsey scale.

For those who exclusively recognise Thorne as a tabloid magnet with an apparent compulsion to “flaunt”, “flash” or “display” her flesh, this guru-like status sounds unlikely. But Thorne has always been determined to upend the typical pathways to success.

She could also be seen as yet another reflection of how we treat women growing up in the entertainment industry. As a teenager, Thorne was both overly sexualised by paparazzi photographers and gossip bloggers when she was still underage, and lambasted any time she dared to show skin (she claimed last year that Disney “tried to fire [her]” after she was photographed in a bikini at the beach when she was 14). It’s a quandary grimly familiar to that faced by Britney Spears, Lindsay Lohan or Miley Cyrus before her. Thorne’s exhibitionism across social media also gave way to a slightly mean nickname as she graduated from Disney: “Lohan-in-training”. Not because she was ever in trouble with the law, nor because she was ever speculated to be a menace on set. In truth, it was probably because both she and Lindsay Lohan grew up poor and had red hair.

She also wasn’t her former co-star Zendaya, who has always possessed a poise and commercial appeal that Thorne has consistently rejected. If Zendaya is the type-A fashion-darling graduate of Disney High, then Thorne is its grungy cheerleader, chain smoking beneath the bleachers. Her aesthetic is more smeared make-up and day-glo hair dye rather than the Met Gala and superhero movies. Both are their own women, dominating their respective corners of the celebrity world, but tended to be portrayed as opposites and rivals. They have, in any case, remained close friends.

What made the Thorne/Lohan parallels even more nonsensical was that both treated their own upbringings in vastly different ways. The gloomier aftermath of child stardom is strange because, more often than not, those who experience it don’t so much confirm the tragedies of their own upbringing, but have tragedy projected onto them.

We know little of Lohan’s actual experiences as an incredibly famous child beyond the sensational headlines, because she rarely talks about them. Instead, she rallies against the paparazzi and says everything in truth is fine, and we fill in the blanks for her.

Thorne, however, has always taken a different tack: be truthful about absolutely everything. In interviews, she has revealed that she only took the Shake It Up job at 12 because she and her family were facing homelessness, a situation worsened by the death of her father when she was nine-years-old. She has similarly spoken about being the sole breadwinner for her family for much of her career, and has claimed that she had just $200 in her bank account when Shake It Up ended in 2013.

“When you’re a single mom raising four kids with debt and you have nothing to your name, it’s f**king sad,” Thorne told the Happy Sad Confused podcast in 2017.

She has been open about her struggles with depression, acne and body image, and has similarly revealed that she taught herself to read, having struggled with dyslexia throughout her life (her new book, in a further reflection on her eagerness for truth, retains her unedited spelling mistakes and grammatical errors). And she has been remarkably outspoken when it comes to slut-shaming and how she has come to terms with her body and her own sexuality. When Whoopi Goldberg condemned her for leaking her own nudes after a hacker broke into her personal accounts and threatened her with blackmail, Thorne posted a video to her Instagram in which she appears in floods of tears.

“I feel pretty disgusting, Whoopi, knowing everyone’s seen my s**t,” she explained. “I hope you’re happy. I can only imagine all of the kids who have their s**t released and then they commit suicide.”

She added that she had subsequently cancelled an appearance on Goldberg’s daytime talk show The View: “I don’t want to be beaten down by a bunch of older women for my body and my sexuality.”

It follows further moments in which Thorne waded into frequently vitriolic discourse about shame, sexuality and abuse. In 2018, after another near-naked selfie was met with a mocking response that read, “What did Disney do this girl?! I think she was molested,” Thorne replied: “Yeah I was. So it wasn’t Disney.”

She would later reveal that she was sexually abused between the ages of six to 14 by an older man who lived with her family.

Speaking to the Los Angeles Times last year, Thorne said: “I used to think of myself like Marilyn Monroe a little bit. Everyone thought Marilyn Monroe was this sex symbol and she was always perfect and beautiful, but she was dying on the inside. I go back to that tweet, and maybe, in some [messed] up way, it’s right. Maybe I am this way because I was molested and raped when I was younger.”

We don’t typically know how to handle this kind of honesty. In June, during a appearance on the online talk show AOL Build to promote her new book, Thorne was characteristically open. She spoke about being estranged from her mother and their slow work to fix their relationship, her struggles against shame and self-loathing and how she has learned to combat her own depression. She makes a list, she said, of things that make her happy and then does them: bike rides; dancing; smoking marijuana; eating Vienna sausages. To an audience question about how she survived the transition from Disney to being an adult actress, Thorne replied that surviving her sexual abuse was far harder.

In response, the interviewer vacantly joked that she had “goosebumps” before wrapping up the interview. And it brought to mind how unusual it is to watch a young woman speak openly and unashamedly of her own trauma in scenarios that aren’t weepy, overly-dramatic sit-downs with a Gayle King or, in years gone by, an Oprah Winfrey, and how little the media is prepared to handle celebrity figures who do.

So it makes a certain kind of sense that Thorne has found a home on the Gen Z internet, where youngsters are better suited to exchanging dialogue about difficult subjects, and it’s not jarring or discordant to post a sexy selfie and then talk about how much you hate yourself.

Bella Thorne is a reflection of how many use the internet today, finding validation in its likes and shares, but also using it as a tool to connect and evolve. Whether that’s possible online remains to be seen. To truly understand how Bella’s world works, you must be inside the online bubble. Yet, it’s easy to imagine that being on the inside has its own cost.

The Life of a Wannabe Mogul: Mental Disarray is published by Rare Bird Books and is out now

END_OF_DOCUMENT_TOKEN_TO_BE_REPLACED

END_OF_DOCUMENT_TOKEN_TO_BE_REPLACED
We and our partners use cookies on this site to improve our service, perform analytics, personalize advertising, measure advertising performance, and remember website preferences.Ok