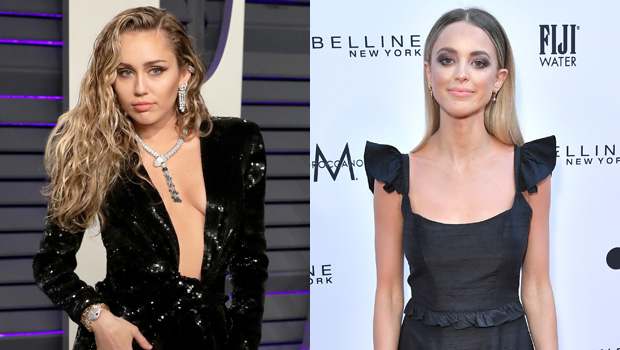 Moments after Miley Cyrus said good-bye to Liam Hemsworth with a brand new song, she was reportedly seen ‘making out all over the place’ with Kaitlynn Carter in an LA nightclub.

Hours after Miley Cyrus, 26, released “Slide Away” — her ballad presumably about her split from husband Liam Hemsworth, 29 — she was spotted packing on the PDA with Kaitlynn Carter, 30 at Soho House in West Hollywood on Aug. 16, according to Page Six. “They were obsessed with each other,” an alleged spy told the publication. “They couldn’t keep their hands off each other. They were kissing and making out everywhere. In the bathroom, at the bar, in the middle of the floor. There’s no question they’re together.”

“They were making out all over the place, and didn’t care who say,” according to Page Six’s source. Apparently, the “Wrecking Ball” singer and Kaitlynn wanted to celebrate Miley’s new song. While Miley doesn’t specifically mention Liam by name, the lyrics heavily imply that the song is about the Hunger Games star. “Once upon a time, it was paradise / Once upon a time, I was paralyzed / Think I’m gonna miss these harbor lights / But it’s time to let it go,” the song starts. During the pre-chorus, she sings, “Move on, we’re not 17 / I’m not who I used to be.” Miley and Liam fell in love while filming The Last Song, a movie she made when she was 17.

A day after “Slide Away” was released, Kaitlynn and Miley were seen shopping together in Los Angeles. Miley’s mother, Tish, 52, joined the two for this trip to the mall. Speaking of her family, the Cyrus clan was also shook when Miley and Liam announced their breakup on Aug. 10. “It’s sad for the whole family,” an insider told HollywoodLife EXCLUSIVELY. “They all really liked Liam and really thought the marriage would work out.” Of course, while they “liked them as a couple,” the Cyrus family will do whatever they can to “support Miley.”

This “support” includes decorating her new home. After Miley and Liam lost their home in the 2018 Malibu brushfires, they relocated to a nearby rental. Now, she’s “looking forward to the energy of a new place for just herself,” an insider told HollywoodLife. “ She was living with Liam up until they decided to split for good, so she’ll live in this place alone for now. But as much as her sisters and mom are over, it’s almost like they’ll be living there, too!” Better make sure there is a toothbrush and a towel for Kaitlynn.

END_OF_DOCUMENT_TOKEN_TO_BE_REPLACED

END_OF_DOCUMENT_TOKEN_TO_BE_REPLACED
We and our partners use cookies on this site to improve our service, perform analytics, personalize advertising, measure advertising performance, and remember website preferences.Ok