Martin Luther King Jr.’s daughter Bernice King has joined others who slam the Duke of Cambridge’s controversial statement regarding the Ukraine-Russia war.

AceShowbiz -Martin Luther King Jr.’s daughter Bernice King weighed in on Prince William’s controversial statement regarding the Ukraine-Russia war. Joining others, King criticized the Duke of Cambridge for referring to war in Europe as “very alien.”

It was initially reported that during a Ukrainian community event, William suggested Britains were more used to seeing conflict in Africa and Asia. However, ITV released footage of his full comments, and it didn’t appear that he referenced the two continents.

After the new footage surfaced, King said in a separate tweet, “I believe that we have a great deal of work to do globally to eradicate what my father called the Triple Evils of Militarism, Racism and Poverty. I believe that language matters in that work. And that it is harmful for a global figure to express war as ‘alien to Europe.’ “ 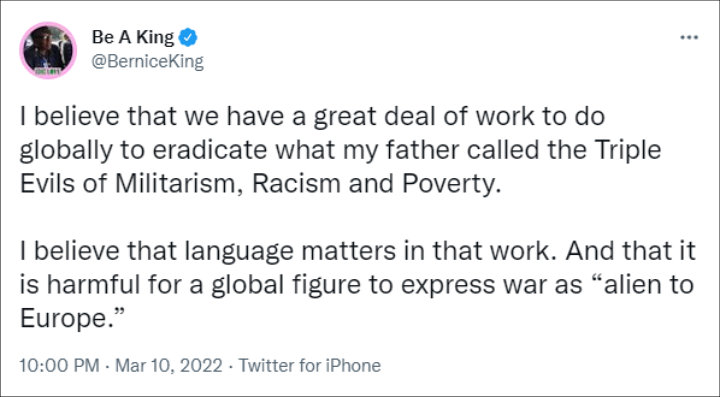 Prince William faced backlash for the comment he made when paying a visit to a Ukrainian Cultural Centre in London to meet volunteers on Wednesday, March 9 alongside his wife Kate Middleton. “Britons were more used to seeing conflict in Africa and Asia,” Prince William said, adding, “It’s very alien to see this in Europe. We are all behind you.”

He also said that he wanted to do more to help. “We feel so useless,” he added.

William also revealed that his three children have been asking about the war. “Ours have been coming home asking all about it,” he shared. “They are obviously talking about it with their friends at school.” Additionally, he claimed that he tried to be “careful” with his words when discussing the conflict in Ukraine.