Mrs. World Caroline Jurie says she is 'ready to hand over the crown' after allegedly injuring Mrs. Sri Lanka

Caroline Jurie, the reigning Mrs. World, has given up her title after her involvement in an incident that resulted in the alleged physical harming of Mrs. Sri Lanka, Pushpika De Silva.

“I am now ready to hand over the crown,” Jurie said in a video statement on Instagram on Friday as she removed a silver crown from her head. “After all, one fair chance is all a woman needs.”

The statement comes after she was arrested on Thursday for pulling the crown off Mrs. Sri Lanka’s head, allegedly causing the beauty pageant queen to suffer injuries.

Earlier this week, De Silva accused Jurie, the winner of the Mrs. World 2020 competition who is also from Sri Lanka, of injuring her head after she stormed the stage and declared that a rule states the winner of the contest must be married and not divorced.

“I want to express my dismay over the recent actions that led to controversy,” Jurie said in her statement on Friday. “I have no personal anger with anyone. I have no agenda. To me, all contestants at the Mrs. Sri Lanka final were special. I only wanted a fair stage and an equal opportunity for all contestants so that they could give their best.”

She continued, insisting that she was “pushing for” the competition’s “rules and regulations” to be enforced “from the very beginning.”

“As I see it, the purpose of Mrs. World is to celebrate all women who are married and still strive to conquer their dreams, along with the commitments and responsibilities a married woman strives to fulfill,” Jurie explained. 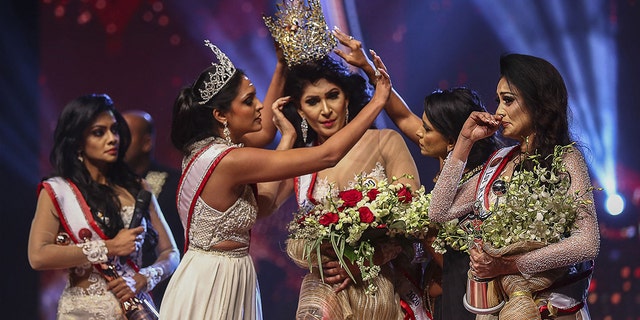 The beauty queen stressed that she stepped down from the competition’s judges panel the day before the contest as a matter of principle when she felt that her voice was not being heard.

“I know I burst a few bubbles, created conversation and even a discussion about class and values that a queen wearing [the] crown should stand for,” Jurie acknowledged, but insisted that she acted on behalf of the values she stands for.

During the televised pageant, Jurie took the crown from De Silva and place it on the runner up, prompting De Silva to walk off stage. However, in a Facebook post about the incident De Silva noted that, although she is separated, she is “an un divorced woman” and therefore feels that the crown was improperly and “insultfully” taken from her.

Police spokesman Ajith Rohana previously said that police had received a complaint from De Silva claiming her head was injured.

Rohana said Jurie and a model, Chula Padmendra, were arrested Thursday on charges of “simple hurt and criminal force” and were later released on bail. The two women have been ordered to appear in court on April 19.