Oti Mabuse strips down to bikini for festive dance with sister Motsi. 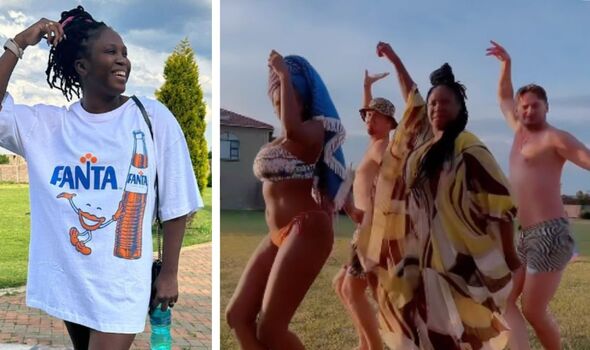 Oti and Motsi Mabuse, who have more than one million Instagram followers between them, gave viewers a glimpse into the sun-drenched lifestyle they have been enjoying in South Africa, since jetting home for the holidays – and, of course, their Christmas celebrations have involved dance.

Oti Mabuse, 32, jetted off to her motherland for the festive season alongside sister Motsi, 41, whose judging role on Strictly Come Dancing ended for the year after watching Hamza Yassin clinch the Glitterball Trophy a week earlier.

Now the sisters are in Pretoria celebrating Christmas in the sun – and while Brits were left shivering and their gardens were blanketed with snow, Oti and Motsi enjoyed sizzling daytime temperatures of around 26 degrees Celsius.

Motsi shared footage of the pair dancing outdoors with their husbands, captioning it: “Dancing into the new year like this! Happy Boxing Day should be named happy dancing day.”(sic)

Meanwhile, Oti shared a photo of herself relaxing in the sunshine, writing: “Sunsets for Santa.”

Last year, she had announced that she was leaving Strictly after a successful seven years on the show, while Motsi is still in the judge’s seat alongside Craig Revel-Horwood, Anton du Beke and Shirley Ballas – a position she has maintained since 2019.

Oti Mabuse shared a stunning snap of herself in the sunshine

Oti Mabuse fluttered her eyelashes while looking seductively into the camera, but quipped that while she was “trying to do it for Instagram”, her sister’s husband, Evgenij Vozynuk, who she affectionately branded her “brother”, was “saying NO”.

Oti Mabuse enjoyed some down time over the Christmas period

Oti Mabuse has had an intensive career as a competitive dancer, winning Strictly Come Dancing on two consecutive years (2019 and 2020) and then moving on to a judging role in Dancing On Ice in 2022, so it’s little wonder she used the festive season for a rare moment of relaxation in the sun.

Motsi Mabuse and her Ukrainian husband Evgenji were together for Christmas

Motsi Mabuse is now living with her in-laws – “possibly forever” – due to the political instability in Ukraine. She and Evgenji Vozynuk received a frantic phone call from his parents at 5am to say that Russian invaders were bombing their homeland of Ukraine, which led to them moving in with the pair in the much more peaceful location of Frankfurt, Germany. However, she and her husband made the journey to Cape Town for some festive fun last week.

Romanian dance champ and choreographer Marius Iepure was by Oti Mabuse’s side in South Africa, having jetted over from London with her for the family reunion. They have been married since 2014, after originally meeting at a dance trial in Germany.

Fiercely ambitious judge Motsi Mabuse took to Instagram after a period of “reflection” on 2022 to wish everyone a merry Christmas.