PATRICK MARMION reviews An Enemy Of The People

Is there a doctor in the house? PATRICK MARMION reviews An Enemy Of The People

An Enemy Of The People (Nottingham Playhouse)

One great advantage of basing a play on a classic is you get a head start. Another is you can pull in great actors like Alex Kingston — as Nottingham Playhouse has done for Rebecca Lenkiewicz’s new version of Henrik Ibsen’s 19th-century protest drama re-set in modern Norway.

It starts off feeling good and familiar, too, with Kingston as a doctor in a spa town where her obedient house-husband (Deka Walmsley) and children appear to be well trained.

She, moreover, is confident that her discovery of pollution in the town’s popular spa waters will be dealt with, so she can continue her cosy, middle-class dream life of bracing walks, mojito cocktails and hash pipes. 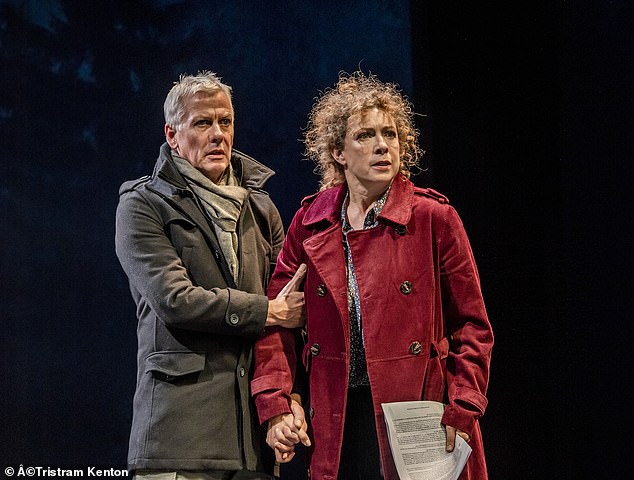 At bay: Alex Kingston and Deka Walmsley in An Enemy Of The People

Unfortunately, her brother has other ideas. Played by Malcolm Sinclair, he is the town mayor and a dry old stick, with the niggardly manner of a vengeful chartered accountant.

He sees that the tourist trade will not be well served by the scandal of her discovery, and arranges for the support she enjoys from the local paper and a popular shop steward to turn against her.

After the interval it’s as though Lenkiewicz loses interest . . . and with it, the plot. Kingston’s reasonable doctor becomes a rambling supremacist, furious with locals who fail to salute her selfless integrity.

The people evolve into a swivel-eyed lynch mob as the wheels come off an already sketchy and polemical play. Some of this may sound painfully reminiscent of our own woes with Remainers and Brexiteers — and lo and behold, that’s the idea!

Oaths fly in all directions, as if Fiona Bruce had lost control of Question Time. And in a desperate bid to rescue a message, director Adam Penford has Kingston stand alone at the end playing the trump card of her victimhood as she proclaims: ‘The strongest woman, she’s always alone.’ 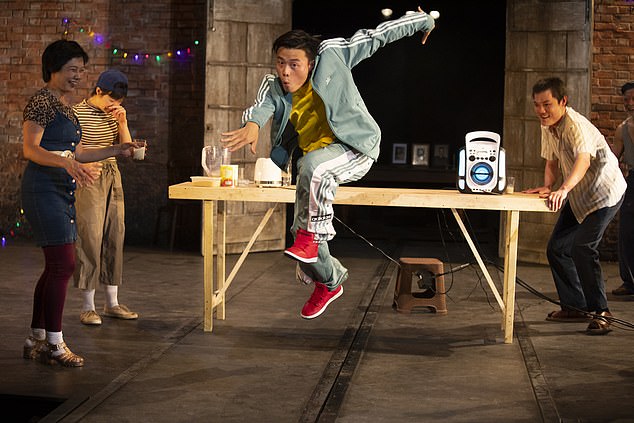 The King Of Hell’s Palace is also a quasi-version of Ibsen’s conspiracy drama — only this time, it’s a blood supply contaminated with HIV in rural China of the 1990s

Kingston is a terrific talent, and is not well employed spouting such saccharine sentiment. The consequence is that Sinclair’s villainous brother becomes the play’s best character, and even wins pantomime boos at the end — which he takes with a grin.

Not really what Ibsen intended and nor, I suspect, Ms Lenkiewicz.

The King Of Hell’s Palace is also a quasi-version of Ibsen’s conspiracy drama — only this time, it’s a blood supply contaminated with HIV in rural China of the 1990s.

Based on the testimony of exiled whistleblower Dr Shuping Wang, it’s a fascinating insight into Chinese society.

This could make a terrific thriller, but writer Frances Ya-Chu Cowhig is torn between the chavvy excesses of Chinese peasants selling their blood, the self-serving ambition of officials lining their pockets and the lofty conscience of another doctor disappointed by everyone’s attitude. 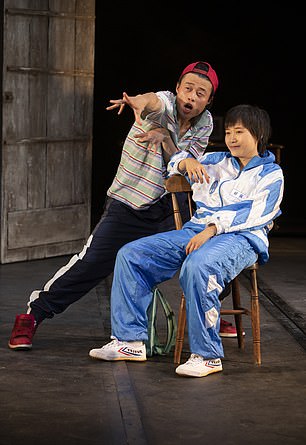 Based on the testimony of exiled whistleblower Dr Shuping Wang, it’s a fascinating insight into Chinese society

The upshot is a rambling account of the Aids epidemic that ravaged China’s Zhoukou region of Henan.

Ya-Chu Cowhig commits the cardinal sin of letting the truth get in the way of a good story, getting bogged down in explanatory dialogue, cardboard characters and a meandering plot.

Nor does Tom Piper’s design bring clarity, with the multi-location action set in a brick farmyard inexplicably served by a two-lane conveyor-belt reaching into the audience.

Directed by former RSC boss Michael Boyd, the show boasts just one complex character: Celeste Den as the doctor torn between her family and her conscience.

More excitement is created by Millicent Wong as the sensationally amoral peasant who goes from unqualified nurse, to unscrupulous businesswoman and cut-throat politician.

Now there’s a story worth telling.

Hot lunches and cold comfort for this community in crisis …

Sheltering from the drizzle, and life, is a disparate group of the lonely, the troubled, lost and needy. All have the sleepy faces and watery eyes of actual humans; the theatrical sheen impressively stripped back.

Faith, Hope And Charity is touching, ferociously well played . . . and incredibly slow. That naturalistic dialogue which is effortlessly witty (jokes about cutting sandwiches into triangles) saves many moments. But even so, I almost broke my watch checking it. 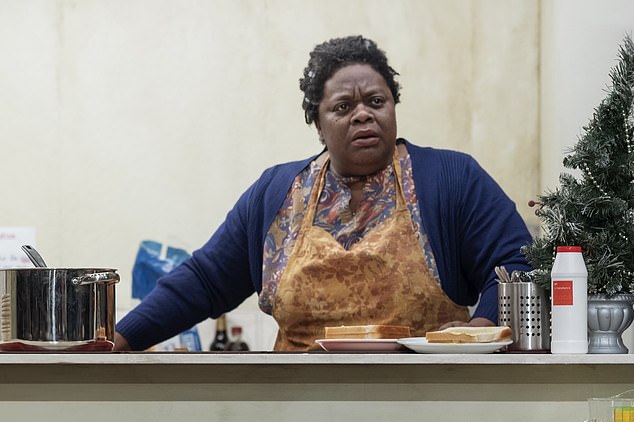 Hazel, a round mumsy matriarch, volunteers here (Cecilia Noble again proving to be the most warmly engaging actor on the London stage). She dishes up hot lunches, with a side of ad-hoc counselling.

The tender, snappily efficient way in which she deals with the confused elderly, the desperate mums, a young man with learning difficulties is gorgeous. Slowly these people’s lives, including hers, are revealed.

Mason, her new volunteer help, is played by Nick Holder as a fantastically awkward Wolverhampton worrier.

The thread running right through is cuts. The roof, quite literally, was not fixed when the sun was shining, and now the drip drip drip of water and the threat of closure are looming.

Therapy isn’t available, many of those we meet are stuck in hostels — and don’t get them started on the courts. But it’s not an unadulterated moan at the system. These are complicated people.

Seeing him shake with rage while being encouraged to join in the community centre’s choir is a treat; scarily natural and red-blooded.

Their story — how his young sister was taken into care and how they’re fighting for her — is the backbone of the night.

The issue is that even this, the meatiest of the tales, doesn’t quite sustain my attention.

The play’s charm is in its seemingly aimless wander through these people’s lives. But sometimes it really does get lost in a thicket.

One man, Two Guvnors is a play that’s forever defined by its first production by Nick Hytner at the National Theatre, with James Corden as the underdog Francis Henshall.

Fortunately, I am the only person I know who missed it. Which means I could enjoy David O Reilly’s take on the glutton who takes on two bosses in order to maximise his chances of a good feed, without forever comparing him with Corden.

Unfortunately for Francis, who is as lazy and libidinous as he is greedy, both his employers are staying at the Cricketer’s Arms in Brighton — nicely evoked in the interiors of Neil Irish’s set.

O’Reilly’s so good, he makes the scripted impromptu exchanges with members of the audience seem wholly spontaneous. In fact, I think one exchange may even have been real. 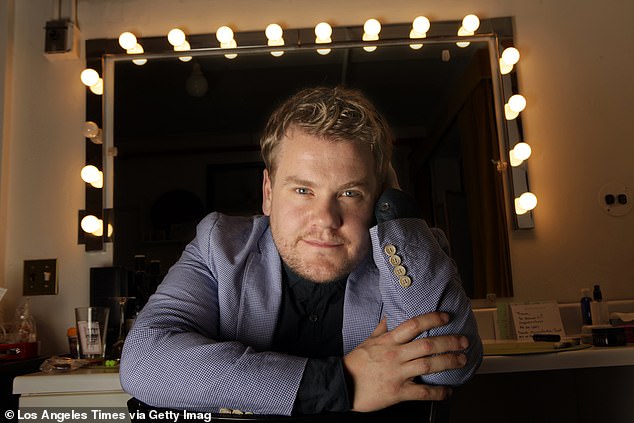 One man, Two Guvnors is a play that’s forever defined by its first production by Nick Hytner at the National Theatre, with James Corden as the underdog Francis Henshall

It’s a farce, and so it’s a romp, based on the traditions of the commedia del’arte and the 1746 original play by Carlo Goldoni, which writer Richard Bean has enormous fun with.

Sarah Brigham’s production is set in 1963, so we’ve still got menus in French, virgin brides and Cockney crime lords who forge the ties that bind them at Parkhurst Prison. David Cardy, as Charlie ‘the Duck’ Clench, effortlessly inhabits the role.

It’s all played with knowing nostalgia: when Francis’s love interest, Dolly — played smartly by Rosie Strobel — predicts a time, 20 years hence, when a woman will be PM, she says this will show the compassionate side of women in power. Ha ha.

The Derby audience responded warmly to the gags (including the dig that the local nursing homes had been emptied for the show), and also the antics of Alfie the waiter, played by TJ Holmes, whose falls downstairs have all the predictability of the clowns in a circus act.

There’s the slapstick element, the spirited Rozzers Skiffle Band and cod intellectual stuff, like Francis pondering aloud about where the conventions of commedia del’arte will take him in the second act — from food to philandering, that’s where.

It’s a warm, good hearted production. And sometimes that’s what you need.