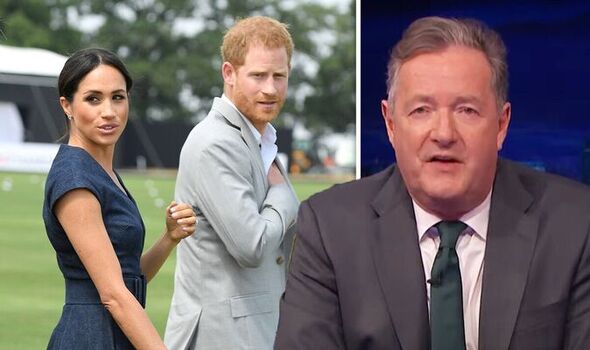 Piers Morgan, 57, has shared his reaction to the first three episodes of Prince Harry and Meghan Markle’s bombshell Netflix documentary, Harry & Meghan, which were released today. In a furious Twitter rant, the TalkTV host claimed Meghan and Harry have “repeatedly tried to brand Britain a racist country” despite being what Piers describes as the “most tolerant place in Europe”.

He wrote in view of his 8.2 million followers: “Disgusting how they’re repeatedly trying to brand Britain a racist country. Most tolerant place in Europe, as all the coverage of their engagement/wedding showed. #HarryandMeghanNetflix.”

Piers’ tweet enraged many users and hundreds have since taken to the comments to criticise his sentiment.

Gra fumed: “Britain the most tolerant place in Europe?! Leave off!!” (sic)

Mohammed added: “Maybe ask a couple of non-white people for their opinion before making such a big declaration.”

While Gary probed Piers: “Have you ever experienced any form of racism in your life? You speak on this subject as a person of knowledge. Can you please explain the experiences you have had, this would make me understand!!! Why!!”

And Timmy echoed: “I think Britain is more tolerant than many countries but it doesnt mean we don’t have racism too. I think obscuring this fact through stuff like this is dangerous. Perhaps listening to non-white people is the best approach to judging racism?”

In the documentary, Prince Harry claimed the royal family didn’t understand that his future wife Meghan would need protection against racism as he accused the press of “destroying” them.

Harry said: “The direction from the palace was: don’t say anything. But what people need to understand is, as far as a lot of the family were concerned, everything that she was being put through, they had been put through as well.

“So it was almost like a rite of passage, and some of the members of the family were like: ‘My wife had to go through that, so why should your girlfriend be treated any differently? Why should you get special treatment? Why should she be protected?’”

“I said: ‘The difference here is the race element.’”

Since Harry & Meghan dropped this morning, Piers has been on a lengthy Twitter rant as he shared his commentary.

He wrote first: “This is worse than Keeping Up With The Kardashians. Something I didn’t think was humanly possible. #HarryandMeghanonNetflix.”

He then went on to criticise Meghan for sharing her sadness that she was unable to invite her niece to her wedding.

He wrote: “Markle explaining why she uninvited her distraught niece to her wedding is hilarious. Ms Compassion literally binned off her own family for the likes of George Clooney, Oprah & David Beckham. #HarryandMeghanNetflix.”

Piers raged: “Markle now trashing her own father, who is still recovering from a massive stroke. Ms Compassion hasn’t even called him. #HarryandMeghanNetflix.”

And Prince Harry also came under fire from Piers, who went on: “‘She doesn’t have a father.’ Wow. Shocking thing for Harry to say about Thomas Markle, the man he has never met. She does have a father, and he brought her up on his own for years. Where is that in the documentary? #HarryandMeghanNetflix.”